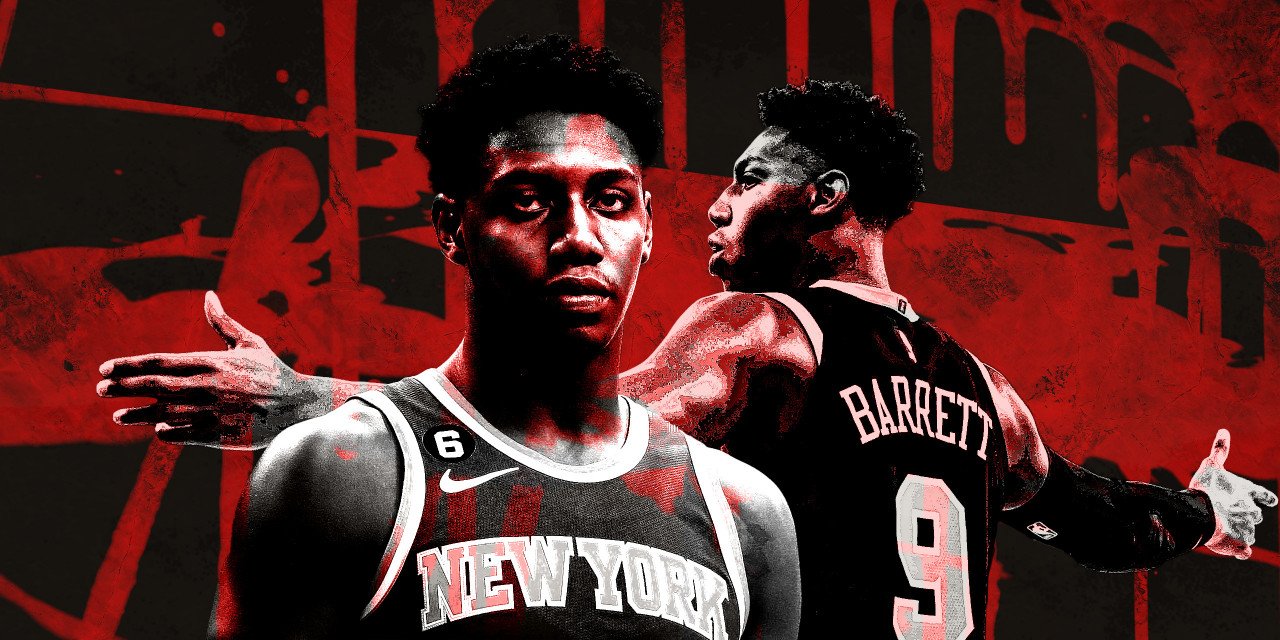 For the sake of the present and future of the New York Knicks, RJ Barrett is going to have to take a huge step forward.

For a brief moment in time, the powder keg was lit. After back-to-back losses against the Golden State Warriors and Phoenix Suns, with a record 145 points given up to the Oklahoma City Thunder days prior, everything felt on the table for the Knicks. Could Knicks head coach  Tom Thibodeau get fired? Could the team make a trade to change the overall flow of the roster? Might we have a discussion on Leon Rose and the front office’s plan moving forward?

Wins against the Jazz, Nuggets, and Thunder (they played twice!) during the team’s five-game road stand quelled some of the issues, but the proper general conversation came to the forefront of both Knicks Twitter and general Knicks publications. From normal things, like the usage of Obi Toppin and Julius Randle together, to more complex ones, like how the Knicks are misusing Isaiah Hartenstein on offense had a small moment in the sun when discussing what’s going on with the Knicks.

One conversation was with RJ Barrett. After signing a four-year contract extension worth up to $120 million, Barrett was expected to take a leap. The addition of Jalen Brunson was supposed to ease some of the burdens and after showing well when given more of an offensive responsibility in the second half of last season, the table was set for Barrett to take a leap – one that would solidify him in the group amongst the rest of the future All-Star wings in the league.

Efficiency is an issue. Outside of the 2020-21 season, where he shot 40% from deep, Barrett has remained in that 32-34 percent range, a mark which has suffered from his propensity to start the season slowly. The real issue is still within the paint, however. Barrett is athletic but, not an elite athlete, and he gets caught up too often before getting to the rim. Per Basketball-Referece.com, Barrett is shooting 37.1% on shots within 3-to-10 feet. A bit more touch around the rim would go a long way to helping with some of Barrett’s woes.

The efficiency numbers are one thing, but the defense is another. In his first two seasons in the NBA, Barrett was an effective defender – not an elite athlete, but smart and shifty when defending on the perimeter and solid enough to handle smaller post players when posted up. The expectation was that Barrett would maintain his defensive ability and offer New York a two-way player once the offense solidified.

That hasn’t happened. The defense has waned, to the point where he’s been negative for a team full of poor defenders. Currently, Barrett sports a defensive EPM of -1.8, only worse than Jalen Brunson’s -2.2 among Knicks rotation players. With players like Cam Reddish and Quentin Grimes manning the second wing spot, the combination of both players with Barrett should create a strong defensive duo on the wing, but like his scoring, that hasn’t materialized.

See how stupid Rob Pelinka is challenge. Knicks obviously buy out Russ…I’d try to get at least 1 of the LA’s firsts but don’t particularly care pic.twitter.com/9EnqYb6dao

One thing that caught abuzz amongst Knicks’ Twitter was when TKW alum Brian Gibberman posted this trade. It was met with brushback and I didn’t agree with it, but it signified a rare feeling in the fanbase that I could understand – if RJ Barrett isn’t an efficient scorer and his defense has plateaued at best, is he on a good contract? Where does he win?

I, personally, keep coming back to the Micheal Finley comparison. Finley was a better athlete, but his game was built on scoring tough baskets, attacking the rim, and playing good defense alongside Steve Nash, Dirk Nowitzki, and the early 2000s Dallas Mavericks. Finley ended up making two All-Star games and I see a similar fate for Barrett if all goes well – a solid wing player who could be an All-Star thanks to a balanced game.

And to be fair to Barrett, he had an excellent game against the Thunder on Monday: 25 points on 10-of-16 shooting, 3-of-4 from the outside, and eight rebounds.

But as we move to the second quarter of the season, RJ Barrett has to turn a corner just to get back to his career norms, let alone live up to expectations placed on him this preseason. The offense has stagnated and he looks like an inefficient scorer who thrives on getting to the paint. The defense has taken a considerable step back, so much so that it hurts the overall ceiling. Any conversation of “good” RJ Barrett starts with Barrett being good on the defensive end.

There’s still plenty of time for Barrett to turn it around and at this stage, and the Knicks badly need him too. For a team on shaky ground, New York, while attempting to fight for a play-in spot, must figure out the direction of the team, the coaching staff, and where to take a risk, whether it be trading up in the draft or moving chips in for a star player. Despite the team’s modest record of 9-9, I believe it’s fair to look at everything on the table.

And in order to have some level of hope in the team’s future, the Knicks need to see RJ Barrett not only get back to his 2020-21 level but build on it with improved play to serve as an outline for the team’s plans moving forward.