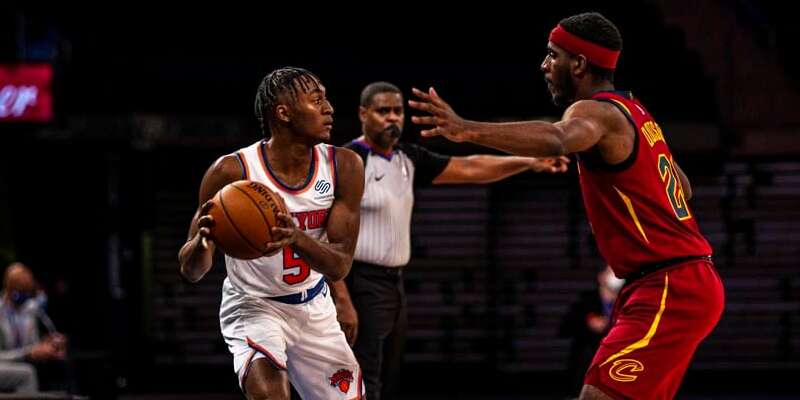 The Knicks host the Cavs again on Friday with several questions still needing to be answered by New York in the final preseason game.

After closing out the Cleveland Cavaliers with a 21-7 run, dominated by mostly kids, the New York Knicks enter their final preseason game with some palpable buzz from the fan base. Whether it be the strides made by R.J. Barrett, the impressive play by Immanuel Quickley, or all the kids flashing coming together to close out the Cavaliers, there’s hype for letting the kids start the season opener against the Indiana Pacers on December 23rd.

Before we can run and soar, we must learn to crawl. Let’s move to the Cleveland game.

Looking at the Cavaliers roster, the Cavs took advantage of Andre Drummond’s skill set and newfound shooting to bother Mitchell Robinson, but other than that, the Cavs didn’t use their full arsenal. Rookie small forward Isaac Okoro looked great, flashing some shooting and high-level defense. Second-year man Darius Garland looked good shooting the ball and operated pick-and-roll at an efficient level.

But it’s the preseason, so much like the previous game, expect a healthy dose of Dylan Winder (2019 first-round pick; lights out shooter), Dean Wade (undrafted forward from Kansas State; found success with three three-pointers in the first game), and our old friend Damyean Dotson, who might snag a rotation role depending on the availability of Kevin Porter Jr. moving forward.

With just four games before the start of the season, Knicks head coach Tom Thibodeau won’t get a chance to solidify a rotation but has seen just about every player who may make the rotation, outside of Austin Rivers, get on the floor. Depending on the status of Rivers, Nerlens Noel, and Alec Burks, and Frank Ntilikina—all three missed the last game—be prepared for another dose of young talent carrying the roster for the night.

Here’s what to watch.

The starting point-guard role seems solidified in New York, with Elfrid Payton looking to reprise his 2019–20 job for this upcoming season. The bigger story is the backup point-guard spot, as Dennis Smith Jr. battles out against Quickley. The neophyte from Kentucky finished with nine points and seven assists, while Smith went for eight points, four assists, and, more importantly, two made threes.

Immanuel Quickley made himself at home at The Garden 👀 🍿

Most importantly, pushed the pace and found Obi, Mitch, and Knox for lobs to help open up the offense during the comeback.

Smith versus Quickley is a battle of whether the Knicks want to start the future now or later. Both players have piqued Thibodeau’s interest at various points throughout the preseason. From an eye test, Smith has struggled to pop on offense, while struggling to shoot. That said, Smith continues to impress on defense. Quickley has it all on defense, has looked fine shooting the ball, but could use some more reps operating the offense.

One game shouldn’t change New York’s mind here, but if Quickley continues to impress, New York will have to find minutes for him, maybe even at Smith’s expense.

New York’s outside shooting: A cause for concern

When the Knicks hired Thibodeau as head coach, one concern as if the Knicks would take enough threes to remain modern. The issue now, however, is the Knicks simply can’t make any threes. Heading into the final preseason game with Cleveland, the Knicks are shooting 23.3% on 90 total attempts. The 90 attempts, 30 per game, is still a concern (would rank 28th in the league in 2019–20), but the shooting woes are an issue.

The Knicks are going to need the shooters to get hot. Quickley could help this number increase, but it’s never a great thing to count on a rookie for anything. Reggie Bullock has struggled from the outside, leaving his spot in the rotation as a mystery. Guys like Burks and Rivers could help, but the early returns have no been great.

In focusing on R.J. Barrett’s preseason, the numbers both matter … and they don’t matter. The numbers—18.7 points, 51.1% from the field, 15.4% from three-point range, 80% from the free throw line—shouldn’t do much for you because of the sample size. That, and we already know Barrett is a poor shooter. The three-point shot will continue to be a work-in-progress for the second-year swingman.

The eye test is a bit more encouraging. Barrett continues to show the ability to barrel into the lane for lefty finishes and even got up and over some players during this three-game stint. His jumper, again, remains poor, but he had some success when he steps into his jumper, as opposed to a flat catch-and-shoot attempt. While he doesn’t look like he can even be a lead guard, Barrett is comfortable getting the ball and creating offense.

RJ Barrett gave us another efficient night with 16 points, 6 rebounds, 2 assists and helped the Knicks pull away late with a few key buckets in transition, along with his dagger assist to Obi Toppin to seal it 🔥

Again: It's just preseason, but so far so good for @RJBarrett6 pic.twitter.com/1Ccpmma3EJ

These are baby steps, but ones that if he can show over the next 20, 30, 40 games, are key development points for his game and New York’s future. Barrett looks a bit more comfortable out there, he looks like a volume scorer and he looks more like a small forward, rather than a shooting guard. Things can change, but getting that information and watching Barrett develop his game should excite fans. A nice final game before heading into the regular season would be great for Barrett.

One last game before the start of the regular season and the Knicks still have several questions that need answers. Depending on the status of his veterans, Thibodeau could go with the same pack of young kids that played well to end the game. Or, he could look to give some other players a chance. This would be a great game for Myles Powell or Ignas Brazdeikis to get in, just to see them before they go to Westchester.