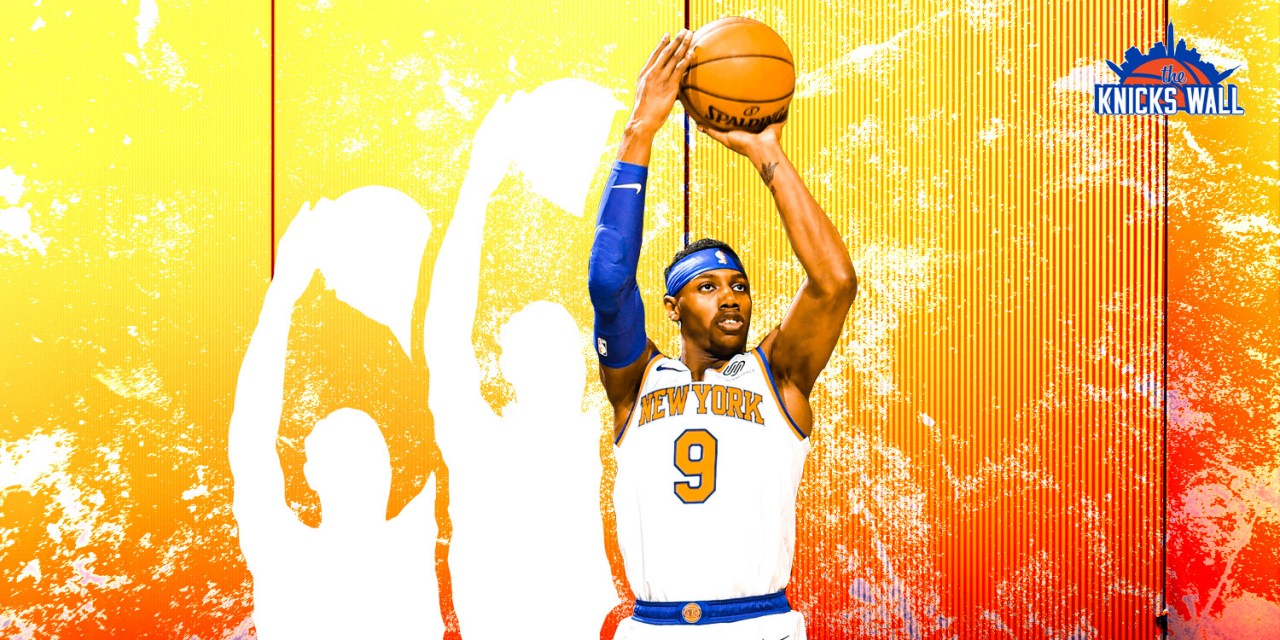 RJ Barrett had an exciting regular-season debut, and the Knicks sophomore has a complete game that he’s only starting to put together.

The New York Knicks doesn’t have a successful track record drafting top-tier talent, and that’s putting it mildly. Kristaps Porzingis is the lone franchise-caliber talent the team has nabbed this millennium via the draft. The Knicks have had 10 lottery picks over the past 20 years, and only one turned out to be a surefire star. But this number could soon be two, as R.J. Barrett, coming off a promising maiden season, has turned heads with his strong preseason play.

Barrett’s scoring numbers were some of the most prolific ever put up by a rookie in Knicks history. His 14.3 points per game average in 2019–20 is the highest for a New York rookie since the great Patrick Ewing scored 20 a night back in 1985–86. Maybe this is a testament to front office ineptitude as well as to Barrett’s success, but to be the organization’s most dynamic rookie scorer in over three decades is an accomplishment.

Barrett’s rookie season was not without its warts. Namely, his efficiency on the offensive end was subpar. Barrett ranked in the 10th percentile among all wings in effective field-goal percentage (44.7%) and the 28th percentile in turnover percentage (12.9%), according to Cleaning the Glass.

The Knicks’ roster last season wasn’t the most talented bunch, and inefficiency oftentimes plagues first-year talents with high usage rates, so there’s no reason to press the panic button. But Barrett must make it a point of emphasis to improve his efficiency. Luckily for New York faithful, his preseason play indicates improvements, which will allow Barrett to become a refined orchestrator and bucket-getter.

The mid-range jump shot is an unfairly neglected aspect of the modern game. Analytics junkies and draftniks tend to chalk up the archaic manner of generating points as nothing more than a wasted possession, considering today’s playstyle oriented toward three-pointers and layups. However, the mid-range game is a staple to All-Star-caliber players Chris Paul, DeMar DeRozan, and LaMarcus Aldridge.

Yes, two points are fewer than three. But the mid-range game remains a useful tool for some of the league’s most heralded scorers. Barrett seems to recognize the importance of adding a reliable jumper to his bag of tricks. Throughout the preseason, he showcased newfound confidence in his pull-up mid-range jump shot.

Barrett had an affinity for attempting mid-range jumpers as a rook despite faring poorly therein. A significant 27% of Barrett’s first season field-goals came from the area between the paint and the three-point arc, yet he managed to convert just 28% of his tries within this range. The tide has turned this preseason, and Barrett’s jumper looks more polished than ever.

He has burned defenses with one or two-dribble pullups all preseason long. The quick dribbles are critical to the effectiveness of the pullup, as it allows for the player to obtain optimal balance and rhythm on their shot. Barrett has displayed a level of composure and finesse on his jumpers that did not exist the year prior. Here are some snippets of Barrett’s most visually appealing pull-ups of the preseason.

If Barrett can heighten his perimeter-shooting chops to the extent that adversaries have to gameplan for and contest his outside shots, then his elite driving ability can wreak havoc on opposing defenses. With a dependable stroke, he would, hypothetically, force defenders to tightly cover him on the perimeter, which would open up countless opportunities for attacking closeouts or utilizing blow-bys off the bounce. Defenses would have to pick their poison: either give Barrett air space to shoot, or tighten up his air space and risk the possibility that he strides down the lane for a thunderous dunk.

Barrett doesn’t have to evolve into an awesome or even an above-average jump-shooter to make a star-sized leap as a sophomore. Gradual improvement towards respectability is what’s paramount. And the mid-range (which is theoretically easier to master than the three-ball) is a great way to hone his shooting mechanics before presumably working to become more of a threat from beyond the arc.

Knicks faithful should be encouraged by Barrett’s performance shooting the ball this preseason, and optimistic that his efficiency both from the mid-range and in general will improve from his rookie stint.

Am I advocating for Barrett to be a primary ball-handler? No, at least not yet. Elfrid Payton (who’s had an up-and-down preseason) was a dependable and cunning playmaker as the starting point guard for New York in 2019–20. While Payton’s outside shot has looked abysmal over four games of practice run, he’s a maestro with the ball and has more experience running the show than Barrett.

Another prime candidate to hold down playmaking duties in the Knicks’ starting lineup is Immanuel Quickley, the speedy rookie who flashed a silky-smooth touch both inside and out, and the vision and patience necessary to run an NBA offense.

At this juncture, Barrett is a secondary ball-handler. He’s a willing and able passer, but with a near 1:1 assist to turnover ratio in his first year, he has yet to prove he can lead the way for the Knicks as a creator. While Barrett shouldn’t be relied on to generate scoring opportunities every time just yet, he has shown growth in setting up his teammates for baskets and knifing his way through traffic for layups in a disciplined manner.

The game has slowed down for Barrett. He affirmed this following New York’s eight-point defeat at the hands of the Detroit Pistons on December 13th. When asked whether the speed of the game has changed from year one to two, Barrett had this to say: “It’s a little slower. I’m a little more comfortable. I know what to expect a little more.”

No play illustrates Barrett’s unique feel for the game better than the sequence below.

This play was paramount to the Knicks winning their December 16th matchup against the Cleveland Cavaliers. With the game on the line, New York handed the possession over to their best player to deliver in the clutch. And boy did he.

Barrett was steps ahead of the defense on this play. He spotted Obi Toppin on the weak side baseline well before the sequence transpired. Instead of making a rookie mistake and heading to the strongside where the defense was collapsing in on him, Barrett escaped the double team and headed to the wide-open weak side to distract Toppin’s man. It worked like a charm: Toppin’s man rotated over on Barrett, and when coupled with Mitchell Robinson attracting the attention of the big with his rim-running gravity, Obi was given free rein to make a quick baseline cut for the dunk to seal the win for the Knicks.

Barrett is a better passer than his rookie numbers suggest. Few players have the know-how and basketball I.Q. to read the defense the way he can. Don’t be surprised if Barrett is the de facto ball-handler for the Knicks in crunch time this season.

Over the four-game preseason, he was wonderfully effective running the pick-and-roll with the bigs, namely Mitchell Robinson. Handing Barrett the keys to end the game is a strategy that the Knicks should utilize come the regular season. Defenses may not be accustomed to defending the pass with Barrett, which could win the Knicks a few games over the course of 72 should they roll with him as a creator to close out tight games.

Barrett put in the work over the historically long off-season to hone his all-around game. Along with his playmaking ability and mid-range jumper, his dribble-drive chops appear to be upgraded as well.

He was aggressive in attacking the rim as a rookie; the problem was the act of converting his shots inside. A sizable 48% of his field-goals as a Knick were taken in the painted area, yet he converted just 54% of his at-the-rim looks, which placed him in the 22nd percentile among wings, per Cleaning the Glass. Many of Barrett’s misses inside can be attributed to the fact that he is no speedster. As such, Barrett had to rely on his strength and finesse to score among the trees—a tall task for anyone not named LeBron James.

To address his short-range shooting woes, Barrett made it a point of emphasis this preseason to attack the rim in transition before the defense was set. His lack of quickness is unnoticeable on the fast break, and with a full head of steam and the basket in his sights, he devastated opponents. Barrett showed off an extensive layup package and an array of dribble moves that highlight his potential to become an elite player on the break in the future. He was surely licking his chops whenever open-court opportunities arose during the preseason.

The new and improved Barrett is an ideal cornerstone for the current makeup of the Knicks’ roster. His vision fits beautifully with pick-and-roll screeners like Robinson and Nerlens Noel. His adeptness at breaking down the defense via dribble penetration will generate countless open looks for shooters like Reggie Bullock and Alec Burks. But Barrett’s three-point shot is still a weakness, albeit insignificant should Knicks brass opt to surround him with additional floor-spacers down the line.

All in all, Barrett is a jack-of-all-trades talent, an up-and-coming star, and he’s got a captivating sophomore stint in-store with the blue and orange.

»READ: Will year two of RJ Barrett be the breakout playmaking season?