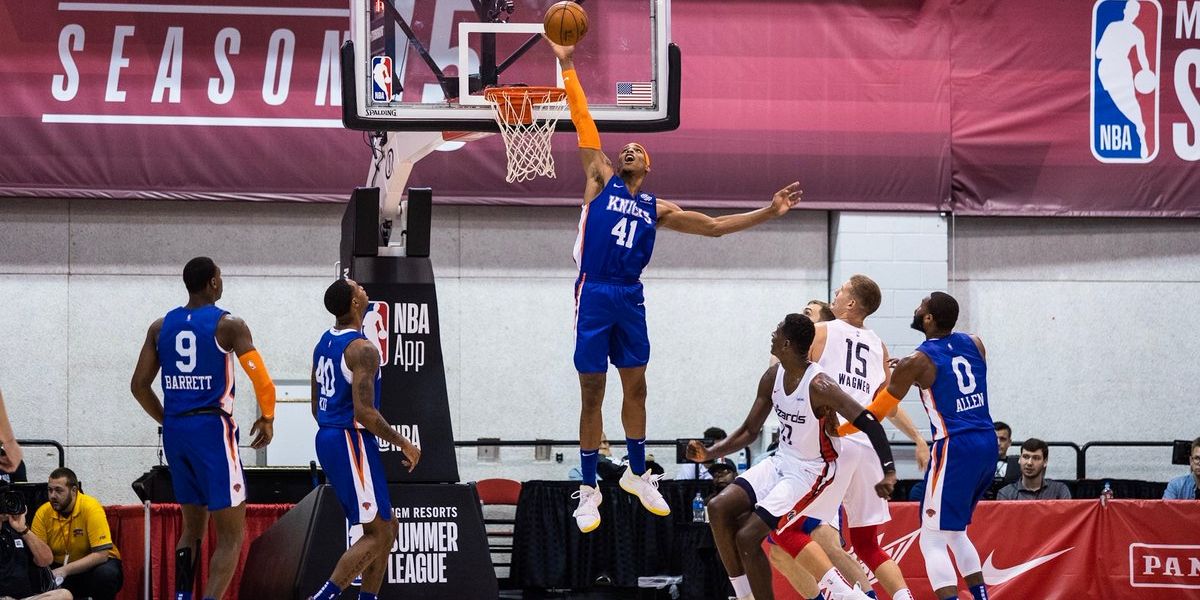 RJ Barrett led the Knicks with a near-triple-double in the final Knicks Summer League game of 2019, defeating the Washington Wizards 103-87.

The New York Knicks played their final Summer League game against the Washington Wizards and ended the five-game exhibition outing with a strong, double-digit victory.

Led by their sophomore class, the Knicks took an early lead, but lost it in the second quarter. This was largely due to less than stellar play from Mississippi State’s Lamar Peters. His time in Las Vegas has been a disappointment from start to finish. He finished the Knicks’ final game without a single point.

R.J. Barrett, however, proved to be a much more reliable ball mover and a surprisingly good passer against the Wizards. The third overall pick nearly notched a triple-double in his 29 minutes of action. Realizing his limitations, most of Barrett’s 21 points game from within the restricted area. He hit on two of his four three-point attempts as well, leaving one of his airballs quickly forgotten.

Barrett did some of everything, ending the game with 21 points, 10 assists, and eight rebounds while shooting 53% from the field. His free throws and defense still need work, but the near triple-double is enough to satiate worrisome Knicks fans.

Barrett’s countryman and fellow draftmate Ignas Brazdeikis had an exciting game, too. Brazdeikis shot 3-for-5 from beyond the arc and 7-of-11 overall. He also grabbed eight boards in his 29 minutes of action. The Knicks rookie looked comfortable scoring on all three levels and handling the ball.

He’s not projected to be a phenomenal passer, but as a forward with passable ball-handling skills, his scoring might be able to translate to the NBA once the regular season starts. If he can score and grab rebounds in the NBA he’ll surely find himself in the rotation.

Kenny Wooten, a 21-year-old shot-blocking extraordinaire out of Oregon, showed out, mostly in the third quarter. Upon checking in, he immediately impacted the game without scoring. A strong 6’9″ forward, he outmuscled his opponents and took to the air to block an astounding five shots. He finished with only two points, but his hard-nosed play did not go unnoticed. If there was anyone who earned a spot in training, it was Wooten.

Big man Tyler Cavanaugh contributed to the win, converting on 6-of-9 field goal attempts and shooting 6-for-8 from the free throw line. When the Knicks lead disappeared late in the game he drew four consecutive fouls and slowed the tempo to a crawl, allowing for the Knicks to build momentum for a dominant fourth quarter. I doubt he’ll receive an offer past a courteous training camp invitation, but it was nice to see an unlikely hero emerge for the Knicks. He was like a less talented David Lee.

The Knicks sophomores Kevin Knox and Mitchell Robinson dominated on the court, flexing their NBA experience. Robinson left his foes down low with expressions of hopelessness as he shot 8-for-9 from the field, snagged nine rebounds, and blocked three shots. Knox didn’t shoot exceptionally well—he went 3-of-9—but his passing was impressive. He ended the game with 15 points, five assists, four rebounds, and two blocks. The work he’d put in over the last year showed in how comfortable he appeared on the court.

The Knicks turned their final Summer League game into an enjoyable, encouraging promotion for their rookie class and returning second-year players. Free agency may have been disappointing for most fans, but if Summer League is indicative of anything, they’re on the right track to developing the young core they’ve drafted.