RJ Barrett Needs to Be the Knicks’ Top Priority on Offense 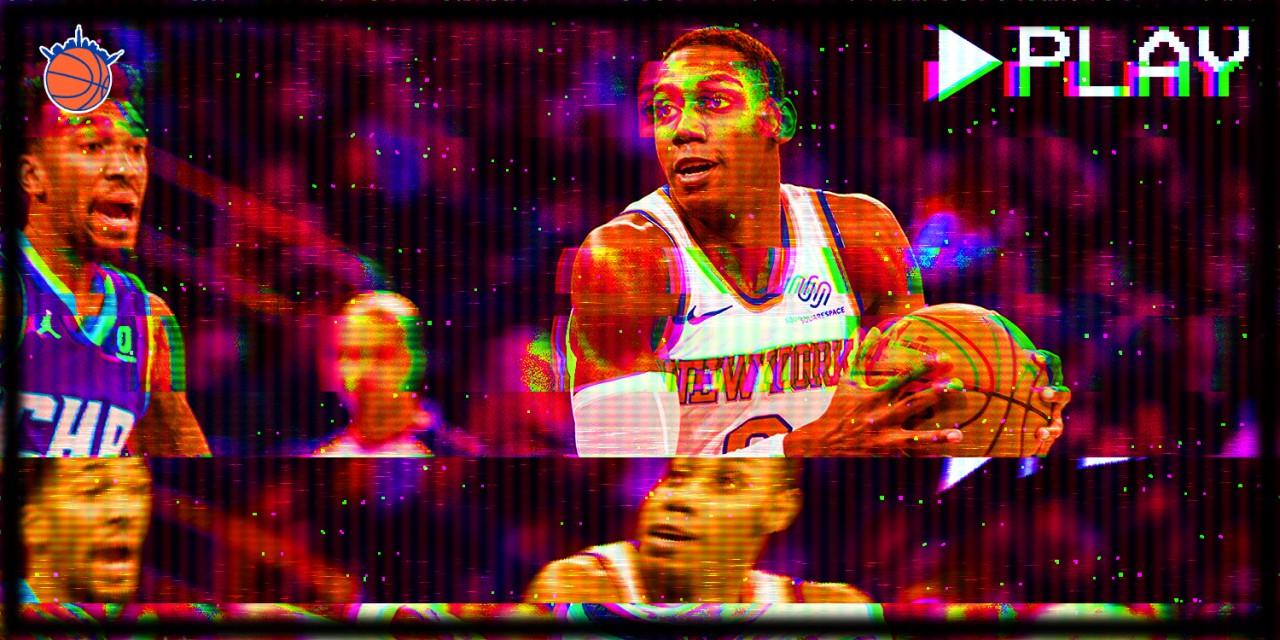 Does 19-year-old RJ Barrett have the tools to be an elite NBA player? He should have every last chance this season to prove that he does.

Now that the New York Knicks have all but abandoned any effort to contend for the Eastern Conference’s eighth seed, the organization has given itself no choice but to give the keys to the team’s young and sometimes talented players. The most talented of the group is also the youngest, however. The 2019–20 Knicks should become all about giving R.J. Barrett the ability to grow. If he struggles, he should be given the opportunity to play through it. If he goes into a slump, he should shoot his way out of it. If he falls, he should learn how to pick himself back up.

Barrett is the highest draft pick the Knicks have made since Patrick Ewing was taken with the first overall selection in 1985. Although it is difficult to discern what his ceiling as an NBA player will be, he has already shown enough to prove that the pick was not wasted. Surrounded by one of the worst rosters in the league, Barrett has still managed solidify his standing among the top of his rookie class. He ranks fifth among rookies in points, third in rebounds and assists, and first among rookies in free throw attempts, per Basketball-Reference. More importantly, R.J. has already displayed tools that raise his floor in the NBA to a higher level than most.

The 19-year-old is a keen driver. This skill was on display at Duke University, but he has honed it with the benefit of NBA spacing. Plenty of NBA players struggle with attacking defenders when they only attack at two speeds, slow and fast. Proven scorers like James Harden, C.J. McCollum, and Lou Williams have mastered the ability to operate in between gears, slowing down to throw defenders off and draw fouls. Barrett has demonstrated this ability as well. Watch here as Barrett slows down, causing Nemanja Bjelica to step off, only to rev up quickly enough to keep Buddy Hield behind him and easily get to the rim:

He uses rhythmic dribbling to briefly lull defenders into a false sense of security—and then shows his explosiveness. Some players never figure out how to throw defenders off with changing speeds. That Barrett has already been schooling defenses with these tactics is extremely encouraging. Notice how Barrett slows down here, keeping Carsen Edwards from making any attempt to get to his shooting hand. Barrett’s patience, meanwhile, prevents Vincent Poirier from making a real challenge at him:

His patience has been one of his most impressive developments since he was drafted. Barrett constantly keeps defenders second guessing themselves. Patience has led Barrett to drawing fouls effectively. He has kept defenders second guessing, which causes them to overact at the last moment. Here, Langston Galloway thinks he is close enough to recover. Meanwhile, Barrett has already decided that he is going straight to the chest of Thon Maker. Exercising patience effectively keeps driving lanes available:

Barrett is a 6-foot-6, 214-pound teenager, but he already is proving to have mastered body control. He never shies away from putting his shoulder square into the chest of larger defenders to create space, as he did to Thon Maker in the above clip. Having both the physical stature and ambition to execute moves like these is common for the league’s premier scorers. Despite giving up an inch to Evan Fournier here, Barrett is still able to use just one push to make Fournier look like a toddler:

This is a skill that Giannis Antetokounmpo honed when he made his first leap as an offensive presence in the NBA. These tools are what make NBA players great. His free throw shooting will come; a bump in free throw percentage often accompanies players making a leap. Brandon Ingram, a former second-overall draft pick, has jumped over 15% in free throw percentage since last year, which has coincided with him averaging six points per game more than last year. Barrett’s per game numbers are similar to Bradley Beal’s rookie year. When he is able to combine his tools with improved shooting from the field and the free throw line, he will be able to wreak true havoc on the league.

Barrett has deployed this Giannis Jr. method to punish unsuspecting defenders who are either being lazy or not respecting Barrett’s stature:

While some may see the ex-Blue Devil’s rhythm, patience, and physical tools as standard for a top-three selection in the draft, it lends itself well to the next step Barrett must make: establishing himself as a playmaker.

Maybe Barrett does not pan out as a number one scoring option on a competitive NBA team. Perhaps he will progress like Paul George, comfortable playing second fiddle but electric enough to take over games regularly. This season should be all about feeling it out.

He has great pick-and-roll chemistry with Mitchell Robinson. He has shown he can get to the basket with ease. Progression is non-linear, and the next area of Barrett’s game that can be taken to the next level is facilitating offense for his teammates. Barrett wisely knows how valuable getting deep into the paint is:

By taking an extra step into the paint, Barrett forces Nikola Vucevic to forget about Robinson, leading to an easy dunk. Vucevic admits as much when he waves to accept blame following the bucket. It’s exciting to see a rookie causing a veteran to smack himself on the head in admitting defeat. Going deep in the paint to draw extra help defenders is skill a that players need to hone over time, and it is extremely valuable. Take teammate Frank Ntilikina, for example. Despite the strides Ntilikina has made this year, his playmaking has a low ceiling if he proves unable to add this facet to his game.

This is why it would be silly to make the focal point of this season anything outside of R.J. Barrett. While Ntilikina is rather valuable, the Frenchman projects more like Shaun Livingston than a number one offensive option. Kevin Knox has been volatile, posting worse offensive and defensive ratings than Barrett. Dennis Smith Jr. seems to be currently averaging one good play for every two bad plays he makes (per science, please don’t fact check), and driving, score-first point guards as a first option seldom leads to postseason success. Mitch is ideally an offensive sidekick and a defensive anchor.

Yes, not everything we have seen from R.J. Barrett so far has been perfect. Never forget his putrid performance against the Milwaukee Bucks. Is watching Barrett learn and grow from failed attempts preferable to watching Julius Randle barf all over four opposing defenders in the paint? That is something you must decide. I, personally, am anti-vomit. If the Knicks are not going to be able to even attempt to compete for the playoffs, I would rather watch Barrett fall. After he’s learned to pick himself back up, it’s going to be pretty damn hard to stop him.