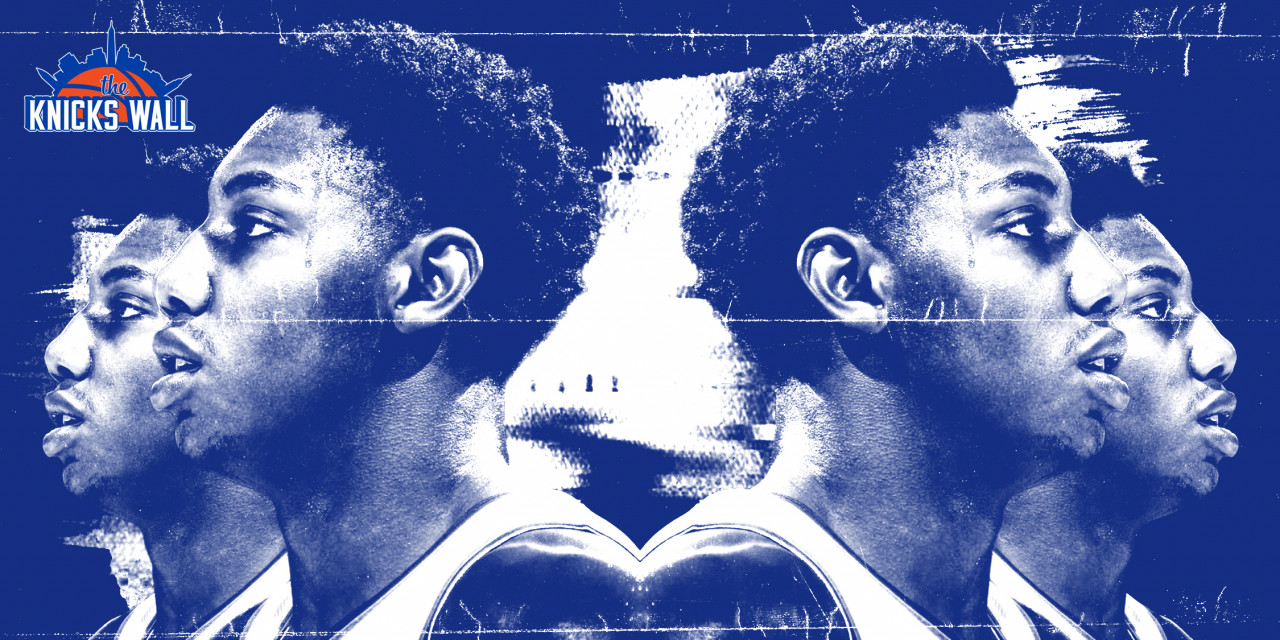 In his second year in the NBA, RJ Barrett proved he’s worthy of respect. In year three, he’s in a perfect position to demand it.

RJ Barrett has every right to take it personally.

Barrett arrived in New York City following the worst season in New York Knicks history. All that pain from the 2018–19 season should have netted the Knicks the first overall pick and Zion Williamson. Instead, the worst season in Knicks history coincided with the first season the NBA decided to fix their flawed lottery system, leveling the odds at the no. 1 pick. Naturally, the Knicks landed third and suddenly a three-player draft was touted as a two-player draft. Barrett went from top pick consideration before Duke to being compared to the likes of Jarrett Culver in the pre-draft process.

Fast forward to today and Barrett’s team is in the best position out of the top three picks, and he is a big reason for that success. With Barrett as their second-best player, the Knicks completed one of the greatest single-season turnarounds in league history. Barrett in particular completed a single-season turnaround that would have stuck out more had Julius Randle not accomplished that feat for himself.

Barrett made considerable leaps in every offensive category as the second scoring option, despite being plagued with the offensive spacing of an East Village apartment. He also logged the second-most minutes in the league, trailing only Randle. No matter which way you spin it, Barrett’s sophomore season was not a mirage. As Tom Thibodeau pointed out, it wasn’t “a guy on a bad team getting empty stats. They were meaningful, he contributed to winning.”

One would think that a 21-year-old who has been at the forefront of the resurrection of the Knicks—something many believed could only be accomplished by a superstar and their super friends—would get some serious love. That has not been the case with RJ.

To be crystal clear, the lack of appreciation for the player Barrett is and is evolving into is well known in the echo chambers of Knicks fandom. Nationally, the RJ love is still playing catch-up.

The All-Rookie Team snub was well-documented, and likely put a battery in Barrett’s back for a stellar sophomore season. This offseason did not help buck that trend any more than a record-setting season at Duke convinced draft sharps Barrett did not possess star potential simply because he wasn’t Zion.

Barrett was left off The Athletic’s Top 125 Players. The writer even went as far as claiming Alex Caruso was more conducive to winning a championship. That happened. In the annual GM survey, zero general managers chose the Knicks to finish top four in the conference again. Thibodeau received zero votes for the NBA’s best coach.

In the category of player most likely to have a breakout season, Barrett’s name was nowhere to be found on a list that included Ja Morant, Williamson, Kevin Porter Jr., Michael Porter Jr., Terance Mann…you get where this is going.

So the disrespect lives on for one more season at least. Barrett knows it and quite frankly, doesn’t seem to give a f–k. “Whether it’s me personally or the team, we just get disrespected all the time,” Barrett said about the survey snubs. “Like I said, it doesn’t matter, we just do, just like we did last year, just go out, show, and prove.”

Barrett added, “Every time I get on the court, I got to show, I got to prove, I gotta show everybody who I am, what I can do, and why everyone was wrong about me.”

The Knicks as a team used the preseason as a statement. The team had a perfect preseason, going 4-0, and not being ashamed to say they took each win seriously. As Thibodeau said himself, “everything matters.”

Given Barrett’s track record dating back to high school, there are reasonable expectations for another leap to take place—perhaps a leap people outside the New York area can appreciate.

Barrett used the four tune-up games to affirm his offensive improvements are legit, more or less mirroring his numbers from last season. He shot slightly below his season averages from the field (43.1%) and the free throw line (69.2%) in four games, but the headline is his comfort from three-point range, where he shot 48.0% on 6.3 attempts.

Long-range shooting was Barrett’s swing skill, and now that it feels safe to count on, the rest of his all-around game can get proper love. What popped off the screen through four preseason games was not just smoother shooting, but a rapidly maturing all-around game.

The two games against the Los Angeles Clippers last season, and Barrett’s defense versus Kawhi Leonard, in particular, were the go-to evidence Barrett can hang amongst the stars. There were others who Barrett locked up through the season, but Kawhi is Kawhi.

been looking at the knicks defense a good bit for part of a piece running tomorrow on @TheKnicksWall, and I've become smitten with rj barrett's very visible defensive growth. he takes on any assignment, knows when/how to rotate and stay square. best of all: he can be SO patient. pic.twitter.com/CWseYKoFWM

In the preseason, Barrett touted his defensive talents in two strong performances against Bradley Beal, a top-tier scorer who has his way with most defenders in the league. Barrett took on the challenge of matching up with the All-Star.

The results were encouraging to say the least…

Barrett’s ability to guard a scorer of Beal’s quality carries more importance now that Reggie Bullock has departed. The responsibility of guarding the opposing team’s best player last season fell to Bullock or in some cases (gulp) Elfrid Payton. That responsibility now shifts to Barrett, a responsibility the 21-year-old is well aware of.

It also ties into the overarching theme of what makes Barrett so special. Barrett is a blue-collar star in the making who was blessed with the winning mentality, a mentality his peers are still working to grasp.

“RJ bricked so many shots when he was at Duke. He put up a lot of shots and missed. When he got to the Knicks, he still bricked a lot of shots. The point is he didn’t stop shooting. He didn’t care,” Garrett told The Athletic. “If he missed, he was going to come back and jack it again. I told him he could miss 10 straight shots, make one and go home and be happy. That’s what we instilled in Cam.”

Barrett retired the “Maple Mamba” nickname following the tragic loss of Kobe Bryant, yet the Mamba mentality remains strong in his spirit. That mentality will come in handy as his leadership role grows this season. Tom Thibodeau has his locker room’s ear now, but we know a coach’s message can grow stale. Having leaders like Barrett embody everything Thibs and the front office envision this team ensures the standard does not dip.

And the front office has made it clear they are believers in RJ Barrett. The belief in Barrett (and Randle) led the Knicks to add pieces over the summer that enhanced his game. With decongested spacing and more defensive responsibility, Barrett could find himself become a household name outside of New York.

It’s been an uphill battle for Barrett in that respect—a battle he enjoys. Calling someone who is a consistent winner an underdog seems foolish, however, Barrett and the Knicks remain underdogs heading into this season. Experts and fans alike believe a regression to the mean is coming.

“Being the underdog is fun. I think it makes winning better. It makes everything better just because, you know, it’s, it’s not just the fact that you won, it’s all the obstacles that you got to go through too.”

Year 2 of RJ Barrett was a pleasant surprise for New Yorkers. Year 3 will not catch many around here off-guard. But for the national audience that has been sleeping on the third player taken in the 2019 draft, Barrett’s arrival is on the horizon.