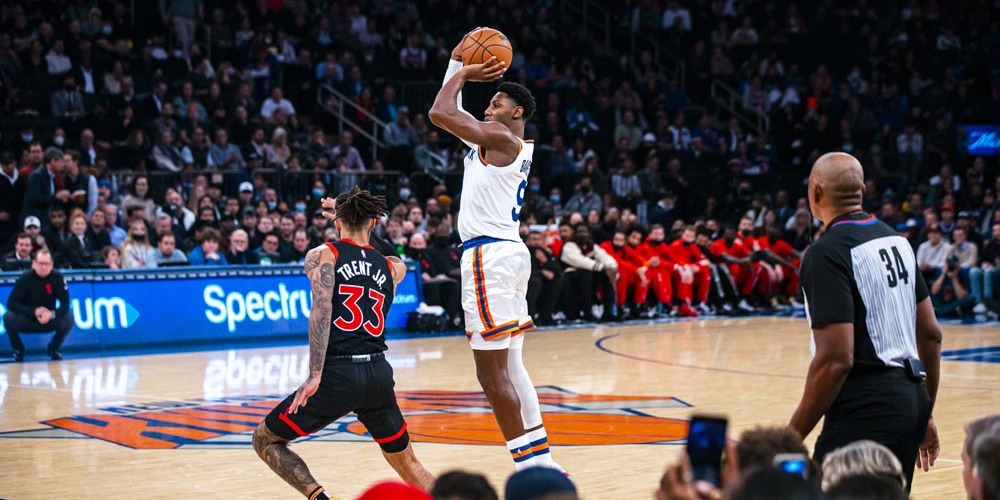 RJ Barrett continues his fiery scoring streak, putting up a team-high 27 points in the Knicks’ harsh loss to the Raptors on Monday night.

New York, N.Y. — Even though the Knicks dropped their second game of the season against the Raptors tonight, RJ Barrett remained the team’s hottest player of late. The third-year starter led the team with 27 points in a team-high 39 minutes played. He also recorded six rebounds and made five of his eight three-point attempts.

“He’s got a lot of talent, he’s an elite talent,” said head coach Tom Thibodeau about Barrett prior to tonight’s game. “He’s put a lot of time into his shooting, into his defense, into finishing. You just look at what he’s done at a young age. I thought he had a terrific year last year averaging 18 points a game on a playoff team. So that’s not an easy thing to do.

This is Barrett’s third consecutive game scoring 20 points, one game after he scored a career-high 35 against the Pelicans in New Orleans. Barrett was in contention for the Eastern Conference Player of the Week award amid New York’s 3-0 week, a feat that would have been a first for the 21-year-old.

RJ Barrett and Kevin Durant were among the nominees for Eastern Conference player of the week, the league says. The award went to Miami’s Jimmy Butler. Utah’s Rudy Gobert won in the Western Conference.

In tonight’s contest, Barrett was largely effective in the second half while the rest of the Knicks’ offense was stagnant. Barrett scored 19 of his 27 points from the third quarter on, knocking down three three-pointers in the half. The three-ball became ineffective for the rest of the team, though, as they only shot 3-for-15 from there after halftime. The Knicks were outscored by 13 in the second half after leading by four at halftime.

“It’s the Garden, we try to protect the Garden at all costs, and we didn’t do that tonight,” said Barrett after the game. “They played harder than us, and in the NBA, most of the time the harder playing team’s gonna win.”

RJ has been hot from 3 tonight pic.twitter.com/UKvlHQUBi8

An area of concern for the Knicks tonight was on the defensive end. The team allowed 16 second-chance points and 21 fast-break points to the Raptors tonight. Though the Knicks’ defense has largely resembled the one fans were enamored with last season, getting back quickly on defense is somewhere they struggle. The team currently ranks 24th in the league, allowing over 15 fast break points per game.

Thibodeau echoed this sentiment on team defense, saying the second quarter is when things began to fall apart for the team. Turnovers beset the Knicks, as they suffered 16 on the evening, and the Raptors used this to their advantage.

The Knicks, now 5-2, will return to play on Wednesday, November 3rd for a road contest against the Indiana Pacers.