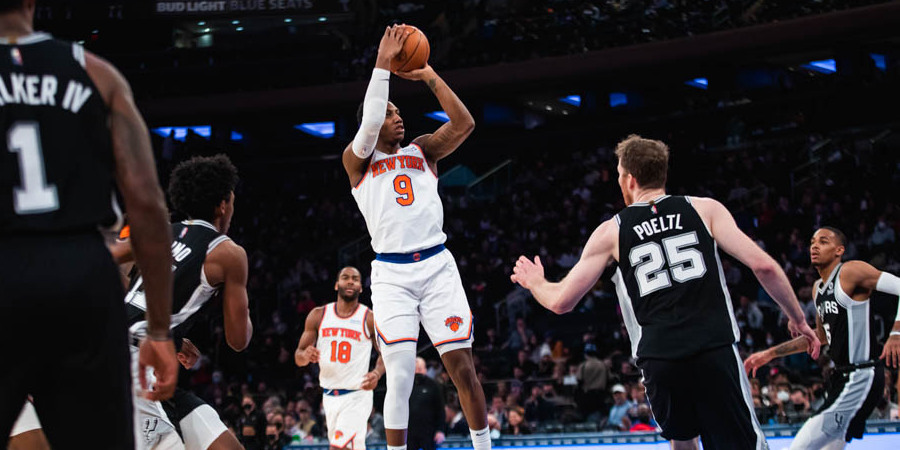 RJ Barrett again eclipsed the 30-point mark, defeating the Spurs, as the Knicks have suddenly won their last four games at home.

After a shellacking at the hands of the Boston Celtics, the New York Knicks (20-21) got some much-needed home cooking against the young San Antonio Spurs (15-24) coming off an overtime loss to the Brooklyn Nets last night. New York dominated the inexperienced Spurs in a 111-96 drubbing—winning their fourth straight home game in the process.

Evan Fournier had an “auspicious start” in the words of MSG Network’s Walt “Clyde” Frazier. Building off his best career game last Thursday against the Celtics, Fournier continued his fine play, scoring eight quick points in the first quarter back from missing the Boston rematch on Saturday before cooling off.

RJ Barrett showed off in the first two quarters and led the way for the Knicks with 14 points in the first half. Barrett got hot towards the end of the second quarter, where he scored eight straight points on three field goals and two free throws. He capitalized his first half with a breakaway windmill dunk to set Madison Square Garden off as the Knicks took a two-point lead into the half.

New York had a balanced attack to start the game, with every player scoring in the first half. Julius Randle struggled early on after hitting his first shot; he didn’t score again the rest of the game. The Spurs were led by NBA steals leader Dejounte Murray, who lived up to his reputation, getting two quick steals in the first half of the game to go along with 16 points to lead his squad.

RJ Barrett continued his dominance in the second half with his scoring and his playmaking abilities helping the Knicks build the first double-digit lead of the game. New York also reversed their fortunes from the free throw line—after hitting on just 40% from the charity stripe in the previous game against Boston, the Knicks were able to hit 16 in a row against the Spurs.

New York handily controlled this game on the back of an all-out team effort spearheaded by Barrett, they began the fourth quarter on an 18-2 run to balloon the lead up to a game-high 25 points. In a feel-good bounce-back victory at home, the Knicks have a season-best four-game win streak at the Garden. All the Knicks starters were able to score in double digits except Randle.

Barrett played one of his best games this season he scored a game-high 31 points with three rebounds, four assists, and a sensational block on Drew Eubanks that was just one of many highlights on the night. Evan Fournier followed his career night with 18 points, five rebounds, two assists, and two steals. Mitchell Robinson bounced back with a double-double that included 13 points and 11 rebounds to go with four blocked shots, simply owning the paint.

Alec Burks was also stellar. He poured in 16 points and two steals of his own. Immanuel Quickley led the bench with 12 points and six assists and a game-high +17. Honorable mention Quentin Grimes showed off his playmaking skills with six assists of his own, mostly off of great ball movement resulting in the open man cashing home a bucket. Randle had a miserable all-night shooting an abysmal 1-of-7 with just two points and 12 rebounds, hearing jeers from the Garden faithful at various spurts.

Murray led San Antonio with 24 points, five assists, and four rebounds. Jakob Poeltl had a double-double with 10 points and 11 rebounds. In his return to the lineup for the Spurs, the youngest player in the NBA, Joshua Primo, had 11 points on the night.

Next up the Knicks welcome the Dallas Mavericks for a national TV game on Wednesday night. Dallas brings with them into New York many familiar faces for what is sure to be an exciting matchup.