RJ Barrett Should Be the One Facilitating the Offense 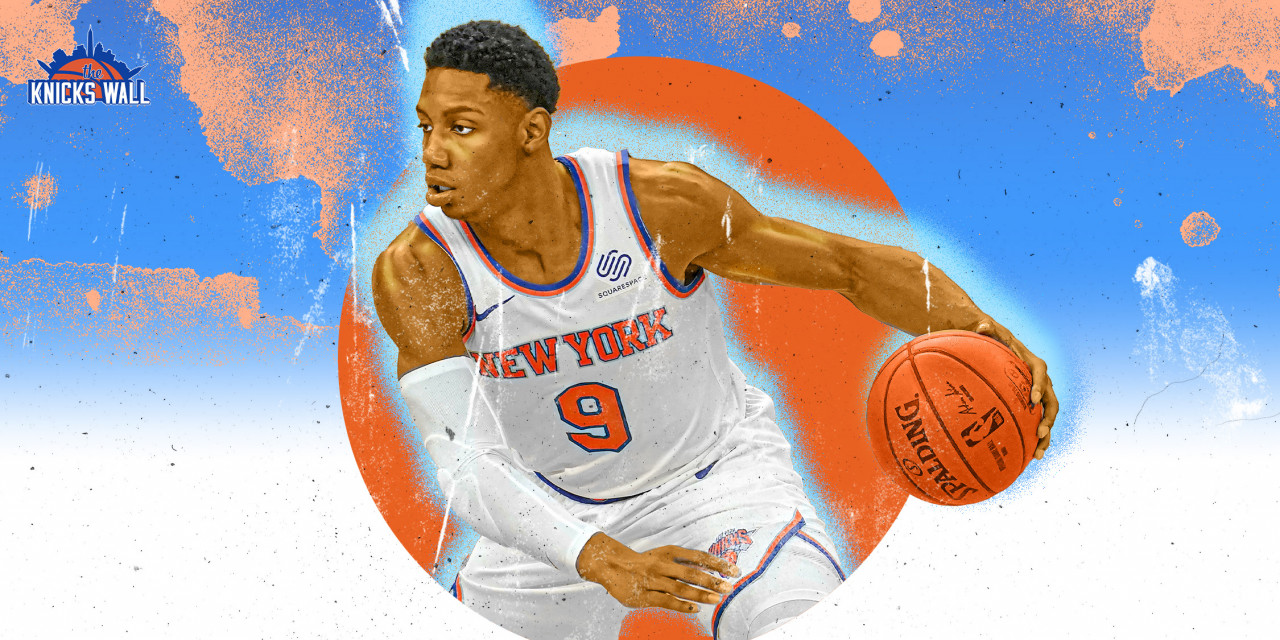 With injury after injury forcing the Knicks to play unconventionally at the point guard position, they should just trust RJ Barrett with the ball.

Entering this season, it seemed like the point guard dilemma the New York Knicks faced for the past decade finally had a resolution. With Kemba Walker starting for his home team at long last and Derrick Rose following him off the bench, New York had two All-Star point guards on their roster to set the pace and elevate this team toward a further playoff run.

Well, that was the idea, at least. After starting in 18 games for the Knicks, Walker was removed from the rotation as the starting unit had trouble gelling and was consistently outplayed by the bench. He was eventually brought back in as the starting point guard, again, as it seemed he wasn’t so much of the problem. However, he has missed nine games since the turn of the new year with recurring knee issues.

Initially, it would be simple enough to slot Rose into the starting lineup anytime the oft-injured Walker was forced to miss games. This plan took an unfortunate turn, as well, once Rose had to undergo ankle surgery in mid-December and miss six-to-eight weeks. Rose is ramping up toward a return, spotted with the team on the road for the first time since his recovery, but a return date is still unknown.

In their stead, rather than go with Immanuel Quickley or rookie Miles “Deuce” McBride, head coach Tom Thibodeau has opted to go non-traditional and insert Alec Burks as the team’s starting point guard. In 20 starts, Burks has been quite average. His per-game numbers are slightly better than they were when he was on the bench, merely a byproduct of playing 14 minutes more per game.

A non-point guard to begin with, Burks doesn’t possess any of the tendencies required to help the Knicks facilitate an upbeat, faster-paced offense. He’s averaging just 3.6 assists per game in his starts and shooting 10% worse from the field and the three-point line. Burks is assisting on shots five percent less than Walker has in his starts, for reference, and the team moves at a pace of just 93.9. Not an ideal stat for a team that already plays the slowest in the league.

With all of Burks’ numbers suggesting he should absolutely not be the starting point guard for this team, and the status of Walker and Rose constantly up in the air, what is the answer to the Knicks’ question of who should come down the court facilitating the offense? Sure, Julius Randle handles this duty often as the team leader in assists, but the extra coverage he’s received since last year’s All-NBA campaign has forced him into many more double teams. And while the possibility of a trade for De’Aaron Fox or another up-tempo point guard is there, there is no plan set in stone.

What the Knicks should do, for now at least, is shift that responsibility over to RJ Barrett. Barrett has already been given more to do within the starting lineup over the past month, and the results thus far have been tremendous. Across the 14 January games, Barrett has averaged 22.6 points per game to go along with 6.1 rebounds and 3.4 assists. He’s shooting 43% on three-pointers and about 18 shots attempted per game, nearly four more than any prior month this season.

RJ BARRETT FOR THE WIN pic.twitter.com/YXhFr5aqkt

In this month-long stretch of his, Barrett has actually taken the smallest percentage of three-pointers thus far in the season, only taking them for a bit over 30% of his shots. On the other about 70%, Barrett has seemed far more comfortable putting the ball on the floor and making his way to the rim for action, something the Knicks were unable to get from any of their point guards. When he does this, he’s either able to kick out for open looks around the three-point line as defenses collapse onto him, or draw contact and go to the free-throw line.

Barrett’s assist percentage for January has been over 17%, and he’s taken a season-high 6.4 free throws per game. His free-throw percentage has been a lowly 67.4%, something he’s admitted needs work. Either way, Barrett’s gotten comfortable enough to get into the paint and hit his shots within nine feet of the basket at a 47% clip. When he knows he may be overwhelmed, he’s become much more shrewd at passing the ball out for a better scoring opportunity.

In fact, over the month, Barrett is 14th in the NBA with 15 drives per game and taking 8.2 shots on those, good for sixth in the league behind point guards like Ja Morant and De’Aaron Fox. Barrett’s passed out on over 25% of his drives to the basket, on which he averages 1.5 assists per game. That’s the 18th-best assist-to-drive rate in the NBA during that month-long span.

Take the below clip against the Pacers on January 4th as a great example of why Barrett should be the main facilitator on the team. Doing a solid job of handling the ball downcourt, Barrett operates with a sense of urgency. Even though the screen he gets from Mitchell Robinson doesn’t stick, he’s able to use his size to get around the defender, Torrey Craig, and use his long wingspan for the layup.

RJ Barrett might just have to do this the rest of the way pic.twitter.com/EEFNH6MtiZ

On drives where he does draw more attention from the defense, like the below sequence against Charlotte on January 17th, Barrett forces the help of three separate Hornets defenders. With them all preoccupied, he finds Evan Fournier in the corner wide open for a clean three-point make. Fournier has been a beneficiary of this type of play from Barrett the last month, as the struggling free-agency signee is averaging over 15 points on 45% from both the field and three-point range in January.

Regardless of whether or not the Knicks swing a trade for a point guard, it’s become abundantly clear that the answer is not Alec Burks. And since Thibodeau seems content with going unconventional at that position, there’s no reason why the Knicks shouldn’t have Barrett hold that responsibility of lead ball-handler. He’s been one of the hottest players in the league over the past month and is showing remarkably more confidence when given increased roles within the offense. If the Knicks were to commit to him with the ball in his hands even further, Barrett could flourish into the type of player fans dreamed of when he was taken with the third overall pick just three years ago.

With the size and brute of a forward and the vision and knack of a guard, Barrett could evolve into a Swiss Army knife player that’s highly sought after in the NBA. With his impressive three-point shooting and improved defense, there’s really a lot he brings to the table outside his dribble, too. It’s all on Thibodeau and the coaching staff to trust the 21-year-old with this type of responsibility to see if it will all translate.