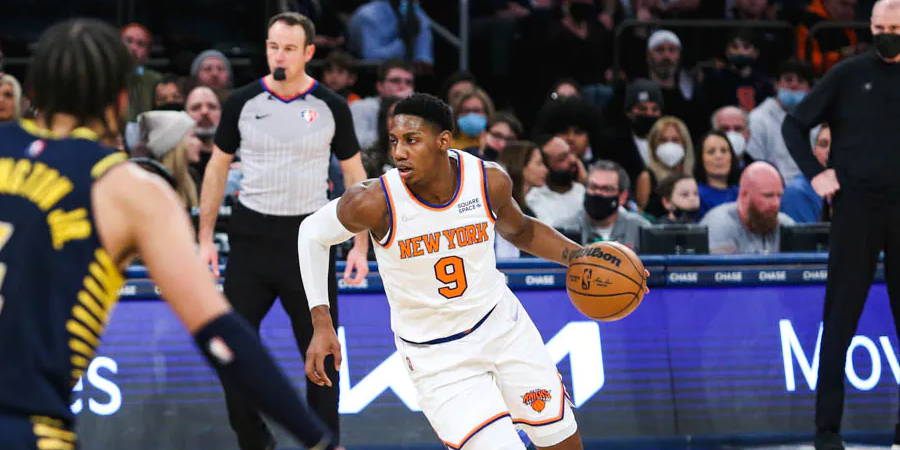 RJ Barrett and Julius Randle, back from COVID protocols, both scored 30 or more points as the Knicks held on to beat the Pacers at home.

The New York Knicks (18-20) defeated the Indiana Pacers (14-24) by a final score of 104-94 at Madison Square Garden on Tuesday night. It was a masterclass from the “Lucky Lefties” in RJ Barrett and Julius Randle, and the Knicks’ defense of last year shined through many times in this game to wrap up the season series against a rival Eastern Conference team that has given New York trouble this season and in recent memory.

This was the fourth and final clash already between the Pacers and Knicks this season, with the teams tied at two games apiece. Julius Randle, who was out the last two games due to health and safety protocols, returned to the starting lineup in tonight’s game. The Knicks also got back centers Mitchell Robinson, Jericho Sims, and Nerlens Noel who were sorely missed in their loss to the Toronto Raptors over the weekend.

Kemba Walker (sore knee) was still out of the rotation and is day-to-day. Otherwise, the Knicks had everyone back on the team from protocols.

The first quarter began inauspiciously for New York. A familiar storyline began to unravel: a player who typically performs quietly exploded against the Knicks. Tonight, it was Indiana’s Keifer Sykes, who was only averaging four points coming into the contest. Sykes kept hitting three-pointers and ended the first on 4-for-5 shooting from deep and 12 points. But the aggressive play of RJ Barrett to start the period helped the Knicks to keep pace with the Pacers’ shooting. By the end of the quarter, he was 6-of-7 from the field and had scored the most he ever had in one quarter with 19 points.

“RJ Barrett off to an excellent start!” pic.twitter.com/dWuLqsoWKK

In the second quarter, the Knicks were looking to continue their momentum with mostly bench players on the floor aside from the hot hand in Barrett. Immanuel Quickley had solid minutes with seven points and a nice lob to Mitchell Robinson to tip off the period. Barrett was exuding confidence and aggression as well, and he ended up finishing the quarter with 24 points on 8-of-12 shooting from the field. Unfortunately, the Knicks were abysmal from beyond the arc (22.2%). Even with the Pacers not doing much better, going 7-of-21 from deep, they pulled themselves back into the game to tie things up at the Garden at 55 points all.

New York was looking to get some energy back in the third after allowing Indiana to creep back into a game that looked to be firmly in their hands the first two quarters. There was back and forth scoring between the two teams, with both drawing fouls but neither doing much to separate themselves from the other pack. The ‘Bockers’ defense had also taken a notable downturn since the first half, and Pacers star Domantas Sabonis was getting what he wanted against the Knicks’ frontcourt. Thankfully, the tandem of Julius Randle and RJ Barrett was unstoppable and carried the Knicks into the fourth quarter with a lead.

The fourth began with several foul calls on both teams, which stunted momentum heading into the period as the Pacers and Knicks clamored for a solid lead. Randle continued his hot shooting, but foolish fouls from New York kept allowing Indiana to put pressure on the home team. Enter a Randle two-point shot masterclass. His midrange game in the fourth completely changed the trajectory for the Knicks as the quarter wound down. That along with outstanding rebounding by New York’s rejuvenated frontcourt helped to seal the deal on a series win against the Pacers and on a fantastic showing from the duo of Barrett and Randle.

To whoever gave Julius Randle a senzu bean, thank you. pic.twitter.com/wrqHmiNUQZ

RJ Barrett finished the night off with 32 points and eight rebounds on 12-of-20 shooting. Julius Randle also had an impeccable evening, getting yet another double-double with 30 points scored and 16 rebounds won. Alec Burks had a quiet but important 14 points, six rebounds, and four assists in his start. Taj Gibson, who started over Robinson as he returns to form after protocols, grabbed six boards and scored four points. Evan Fournier, who continues to draw ire for his at times painful shooting and defensive displays, once again disappointed with zero points scored.

New York’s bench was solid this evening, with Immanuel Quickley leading the scoring for the unit with 11 points. Mitchell Robinson was able to grab eight rebounds and score eight points in his debut back in the rotation post-protocols. Quentin Grimes had strong defensive minutes tonight in 20 minutes of action while scoring three points. Obi Toppin, who was relegated to the bench with the return of star Julius Randle, only played nine minutes. Toppin only scored once but grabbed two boards for New York. “Deuce” McBride played extremely limited minutes and did not score.

The Knicks will go on to play the Boston Celtics on TNT at Madison Square Garden on Thursday night. It will be a battle of two strong but disappointing thus far, Eastern Conference teams that are now almost fully back to healthy rosters.