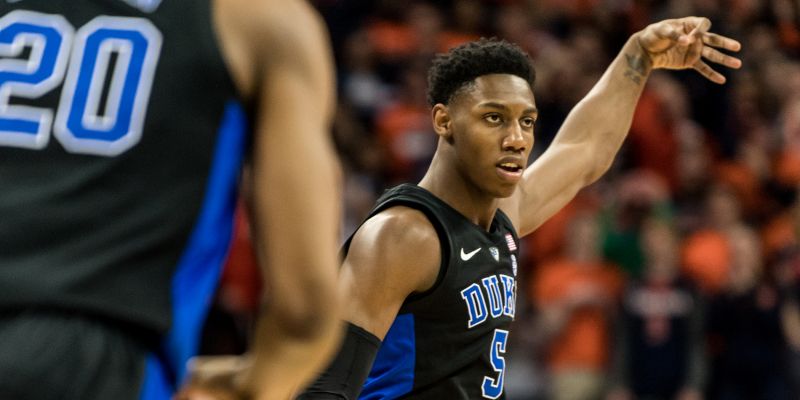 ESPN’s Adrian Wojnarowski reported early Monday afternoon that Barrett has a meeting with New York scheduled for early next week. The Knicks have also scheduled workouts with potential second-round targets.

Duke one-and-done swingman R.J. Barrett will visit the New York Knicks next week, per a tweet from ESPN’s Adrian Wojnarowski. Barrett is expected to meet with New York’s front office, complete a medical evaluation, and do light court work. Wojnarowski also calls Barrett the presumptive no. 3 pick in the 2019 NBA Draft, implying the Knicks’ intentions to select R.J. should they hold on to the third overall pick.

Duke forward RJ Barrett – the presumptive No. 3 pick in the NBA Draft – will make a visit to the New York Knicks early next week for meetings, medical evaluation and light court work, league sources tell ESPN. The Knicks are selecting third in this month's draft.

While Barrett is the likely choice for the Knicks should they stay at three, it is still possible the team either trades down in the draft or moves the third pick as part of a larger package for a star on the trading block, such as Anthony Davis, who has already requested a trade from the Pelicans, or Bradley Beal, should the Wizards go into a full-fledged rebuild this summer. The prospects of a Davis or Beal trade would become more realistic if the Knicks are able to land one or two of the top free agents this summer, namely Kevin Durant, Kyrie Irving, or Kawhi Leonard.

New York has considered trading down in this draft, per a report from ESPN’s Jonathan Givony early last week. More specifically, the Knicks had conversations with the Atlanta Hawks about acquiring the eighth and 10th pick in a potential swap. Scott Perry, Steve Mills, and the rest of New York’s front office are currently doing their due diligence on lottery prospects, with rumored interest in fellow Blue Devil Cam Reddish, Texas Tech’s Jarrett Culver, and North Carolina one-and-dones Coby White and Nassir Little, according to Givony.

If the Knicks find a prospect of perceived similar value to Barrett who is projected to go later in the lottery, they might pull the trigger on a trade down to collect more assets. However, in his latest mock draft posted Monday morning, Givony mentioned the following with regards to the Knicks’ intentions with the third pick:

“The Knicks didn’t completely lock into the idea of drafting Barrett when they were awarded the No. 3 pick, and they have been exploring alternative options, including potentially trading down. With that said, barring an Anthony Davis trade on draft night, it would be surprising if they ended up doing anything besides selecting Barrett.”

In a busy Monday morning for Knicks reporting, SNY’s Ian Begley reported New York scheduling workouts for Mississippi State guard Quinndary Weatherspoon and Duke center Marques Bolden. In addition, it was previously reported by Begley that Weatherspoon’s teammate, Aric Holman, and Kansas guard LaGerald Vick were scheduled to work out with the Knicks. All of these prospects are under consideration for New York’s second-round selection with the 55th overall pick.

Newsday‘s Steve Popper tweeted Jarrett Culver will work out for New York, too, scheduled for Wednesday.

Mike Vorkunov of The Athletic shared more workouts conducted by the Knicks:

The Knicks worked out Markis McDuffie and Phil Booth today, and will work out Kerwin Roach tomorrow, per league sources. @IanBegley reported they have Aric Holman and Quinndary Weatherspoon in today.

»READ: After missing out on Zion, R.J. Barrett is a nice consolation prize for the Knicks