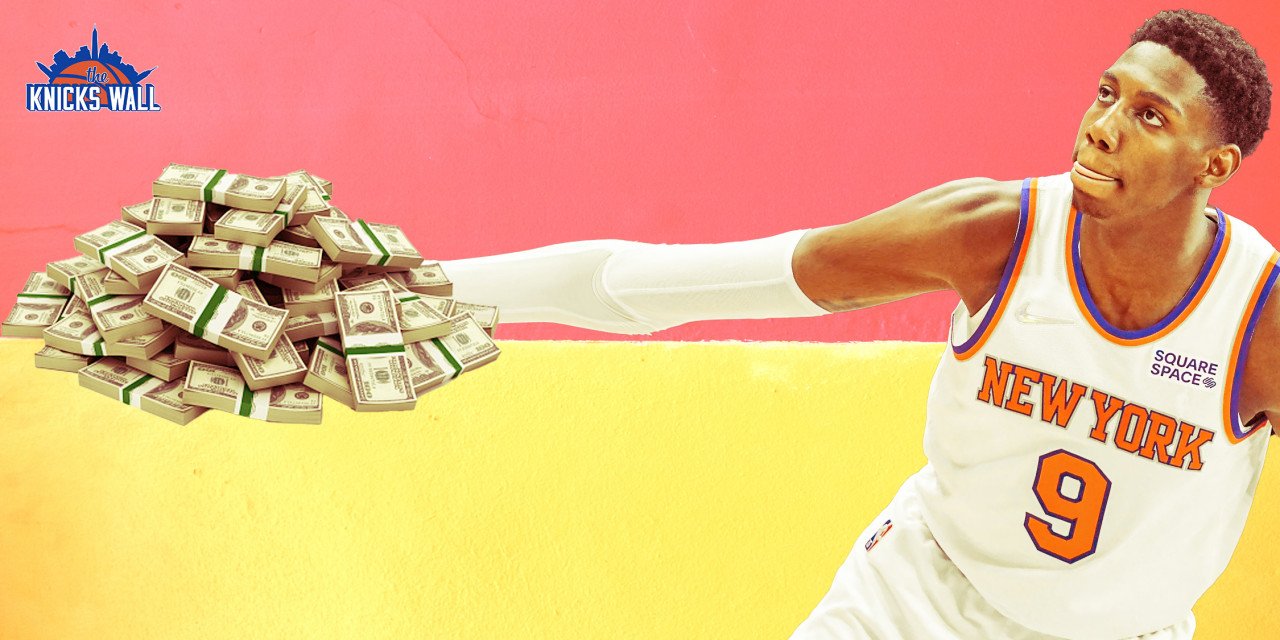 Throughout the course of the season, RJ Barrett has stepped up as the next cornerstone player. The Knicks can ink him an extension this summer.

The New York Knicks haven’t been able to sign a rookie they’ve drafted to a multi-year contract extension since Charlie Ward. They are finally on the verge of ending that undesirable streak with RJ Barrett. The third overall pick in the 2019 NBA Draft is quickly become one of the best young players in the league and has been the best player on his team since the new year. Barrett is turning into what New York had envisioned when they selected him to be the face of the franchise, and he’s starting to live up to expectations.

Barrett’s ascension has been slow and steady, but in recent months, it’s gone into hyperdrive. Since his rookie season, all Barrett has known is turmoil and turnover from his franchise. He’s finally had some sense of stability—and the foundation has given him the opportunity to start scratching the surface of his potential.

After a slow start to his third campaign, Barrett has been one of the few bright spots in an otherwise disappointing and underachieving season. The Knicks’ overall struggles have not bothered Barrett one bit. He has shown that he has the temperament to handle the demands of playing in New York. He never gets too high and he never gets too low, he’s been even-keeled when he’s struggled, and he has continued to work diligently on his game when things haven’t gone right. RJ has also grown as a leader on and off the court, he’s been very open with the media about his shortcomings and he’s always willing to face the music at the podium. On the court, he’s taken command of the team, occasionally running the offense and being vocal when he needs to be talking to the younger players when he’s sharing the court with them. If the Knicks were ever having doubts whether they should pay or not, the past few months have surely quelled any concerns.

Barrett’s growth as a player has been consistent with the first two years of his career. This season, he began with a rough patch, and for the first couple of months of the season, he was mainly up-and-down with his production, which in turn hurt his shooting numbers. November was especially rough for Barrett. He scored his lowest scoring average in that month, averaging just 12.8 points a game in 15 contests. He also posted his worst shootings numbers across the board in November: lowest field-goal percentage at 36.3% and fairing even worse from long distance, shooting 29.2% from behind the three-point arc. From the charity stripe, Barrett shot a sub-70%, shooting 67.4%.

Free throw shooting appears to be the weakest part of Barrett’s game, as he’s struggled from the line all season long, shooting 71.3% overall. At the time, those numbers may have been a cause for concern for the team and fans who were expecting another leap from their first-round pick due for a contract extension. True to his nature, Barrett did not let a prolonged slump bother him enough to stop his development as he has just gotten better. Every subsequent month, he has improved his play from the month before. It’s a positive sign that Barrett has gotten better as the season goes on and it’s not an anomaly. This has been a trend his entire career so far; Barrett always ends the season strong.

Since January, Barrett has averaged over 20 points a game. Post-All-Star break, RJ Barrett is averaging 26.5 points a game. He’s taken another leap and then some. He’s become a fierce downhill player attacking the basket every chance he gets. Barrett is converting 53.5% of attempts within five feet of the basket. NBA officials have begun to recognize Barrett’s physical style of play; RJ has made this his bread and butter and has resulted in more free-throw attempts. Before the All-Star break, Barrett was attempting just 4.6 free throws a game. Since then, Barrett has almost doubled his attempts to 8.9 free throws a game.

Post All-Star RJ has also become a more ball-dominant player, his per-game field goal attempts have jumped up from 15.5 attempts before the break to 21.4 attempts after. Barrett has honed in on his strengths, pre-All-Star break he attempted 281 field goals fewer than five feet from the rim in 48 games. In then 14 games since the All-Star Game, Barrett has already attempted 134 from the same distance. Barrett’s increased reps in ball-handling have increased in recent months because the Knicks quite simply don’t have a steadily reliable one, so Barrett has had to take it upon himself to create his own chances thus increasing the attempts per game. He has become a better player each season without a steady point guard, a role that he sometimes is forced to take on.

Barrett has looked like a different—more confident, more comfortable player since the beginning of 2022 and he’s asserted himself as an alpha on his team. Yes, there are nights where he still struggles as a young player, but the growth is plain as day. New York has gotten a taste of Barrett’s potential as the face of the franchise and for this first team he has been able to play without much turnover and it’s yielded positive results. In his first three seasons, Barrett has gone through three head coaches and two different regime changes and he’s never complained once. Barrett is due for a rookie max extension worth as much as $181 million. Giving anyone that kind of money is a risk no matter what, but RJ Barrett has proven he’s worth it with his constantly improving play on the court and consummate professionalism off the court. He’s stepped into the spotlight with the poise and make-up to handle New York’s brutal microscope. At 21 years old, RJ Barrett is starting to become the franchise player New York has been searching for since Patrick Ewing, who carried that mantle for 15 years.