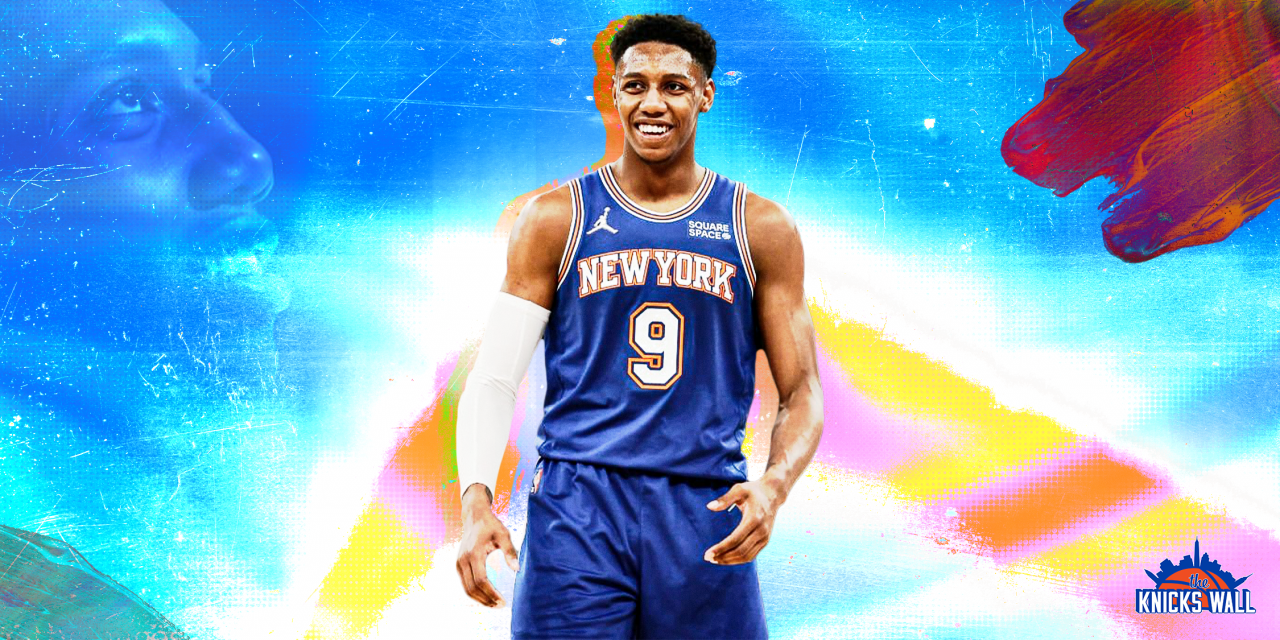 The curse is over! RJ Barrett has officially signed a four-year extension, and Knicks fans should rejoice.

If RJ Barrett accomplishes nothing else as a New York Knick, he is still a legend.

Once Barrett finalizes his reported four-year, incentive-laden extension that could be worth upwards of $120 million, it will be a seminal moment in franchise history, finally putting an end to the infamous “Charlie Ward Curse.”

For nearly a quarter-century – 23 years, to be exact – no Knick first-round pick had signed a second contract with the team. Mitchell Robinson got the trend going when he inked his extension earlier this summer, but since he was a second-round pick, Barrett is the true curse breaker.

Barrett becomes the youngest player in franchise history to receive a $100 million contract and solidifies his standing as a cornerstone piece. The circumstances in which the curse was mercifully put to rest however were a little unexpected to outsiders.

When ESPN’s Adrian Wojnarowski dropped his Woj bomb on Gotham late Monday night, he added the caveat that the extension “complicates” ongoing trade talks with the Utah Jazz for Donovan Mitchell. It was later revealed by others that prior to the extension being finalized, Barrett was included in an offer to the Utah Jazz, along with two unprotected first-round picks, in Donovan Mitchell trade talks.

Wojnarowski reported that Knicks team president Leon Rose set a Monday deadline to consummate a deal with the Jazz, otherwise the Knicks would lock up Barrett. Rose remained true to his word, and now Barrett’s future in New York feels secure to an extent. While Barrett can still technically be dealt, the Jazz are much less incentivized to make a deal with Barrett’s new price tag.

A Mitchell trade can still be had. Assuming the Knicks want to keep Barrett as the extension suggests, the trade-off in Mitchell negotiations would be including more unprotected draft picks, more young players, and likely a third team. The Los Angeles Lakers can enter the fray with their reported interest in Cam Reddish, or a mystery team can emerge.

Whatever avenue Rose chooses, it will have to be an impressive package to sway the ever-stubborn Danny Ainge, but a package the Knicks can put together nonetheless.

Enough about the Mitchell trade for now. That saga has and will continue to eat up most of the Knick-related headlines, as it did in the immediate aftermath of the extension being reported, until a deal is made. Now is about Barrett, the highest Knick draft pick since Patrick Ewing, seeing a second contract that is mutually beneficial to him and the team.

Assuming Barrett hits all his milestone incentives over the next four years, his deal comes in considerably lower than fellow draft classmates Zion Williamson, Ja Morant, and Darius Garland. Once the Miami Heat decide what to do with Tyler Herro, he too could be signed for a higher dollar amount. Barrett likely slots after Morant, Zion, and Garland in the pecking order at the moment, but there is not a $111 million difference between them.

Barrett has taken on the unenviable spot under the microscope as the face of the Knicks, which means every development in his play, positive or negative, gets amplified. If Barrett truly wanted to focus on maximizing his dollars, he did have a better case than many would think.

Since arriving in New York, Barrett has improved his game each season. His NBA career got off to a hellish start under the tail end of the disastrous David Fizdale experience, with Barrett averaging 14.3 points as a rookie with shooting numbers that resembled a poor-performing stretch four, not a top wing prospect.

Under Tom Thibodeau, though, things have changed considerably for the better. Thibodeau’s drill sergeant attitude and much-improved coaching staff helped get Barrett on track to where he has strived to be since he was in high school.

In Thibodeau’s first season, Barrett was a key player in a 41-win, miraculous turnaround season. That season, Barrett played the sidekick role to Julius Randle and significantly improved his game.

He took on the toughest defensive assignments while also growing as a playmaker and, most importantly, improving his ghastly rookie shooting numbers. Over the course of one offseason Barrett improved his shooting splits from 40-32-61 to 44-40-71. Last season that progress continued, even with a slight regression in his shooting numbers, as Barrett ascended as the top option later in the season.

With help from associate head coach Johnnie Bryant, who has worked closely with Barrett as he has with other star players in the past, Barrett joined an impressive group last season, becoming one of the youngest players to average 20.0 points per game for a full season. Barrett joined an even more elite company in his third season. His 3,000 points, 1,000 rebounds and 200 3-pointers before his 22nd birthday puts him with a group of legends: Kobe Bryant, LeBron James, Kevin Durant, and Luka Dončić.

This all has to be mentioned when discussing an extension that really fits Barrett’s ethos.

Barrett is known for putting countless hours in the gym and being wired to make doubters feel foolish. It also shows his commitment to becoming an elite player rather than the richest player.

His willingness to accept a contract much lower than his peers, with incentives that are better suited for someone like Zion, speaks to these grander aspirations. Unlike Zion, for example, Barrett plays just about every night, playing 198 out of a possible 220 games so far in his career.

How Barrett’s career ultimately unfolds in New York remains to be seen, but thus far he has given the team little reason to doubt he can become a special player for years to come.

»Read: Why RJ Barrett will thrive next to Jalen Brunson

»Read: The case for Julius Randle as a secondary option