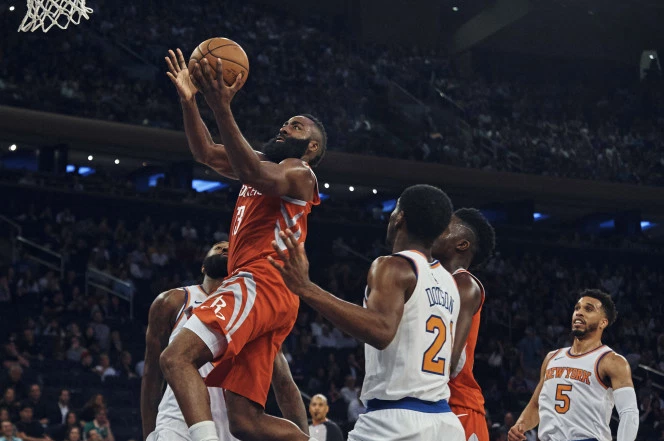 Well, four games into the New York Knicks’ preseason campaign and it might be time to write off the season. Thus far in the preseason, the Knicks are yet to play a game where they have given up under 100 points, while also being the second straight game where they have lost by 20+ points.

On Monday night, it was a 117–95 whooping that included Houston head coach Mike D’Antoni playing his starters deep into the fourth quarter, angering Jeff Hornacek. James Harden had a near triple-double with 36 points, 11 assists, and nine rebounds, and the Rockets made 22 three-pointers.

But, hey, “Baby Driver” (Ansel Elgort) was in attendance.

While there is a lot of gloom and doom surrounding this team, though, there are a couple positives to talk about and hey, maybe we’re clinging to straws, but let’s make the best out of this dire situation.

Damyean Dotson was the clear stand out performer for the Knicks tonight. The second round pick in this year’s draft, Dotson’s performances have been an area of interest for fans as the University of Houston product looks to garner a role player spot this season. Dotson, in 26 minutes of action, was able to post 17 points on 7-of-10 shooting from the field (3-for-5 shooting from three-point range), while also accumulating two rebounds and two assists.

For much of the first half, Dotson was the only Knicks player with a positive +/- as he posted +3, but alas, poor defense and, well, the Knicks being the Knicks led to Dotson finishing with a -1.

This was by far Dotson’s largest role in a given game and by far his best performance. Proving to be an offensive threat from all angles, Dotson was one of few Knicks to truly trouble the Rockets defensively, proving his worth as an asset moving forward.

Despite a relatively cold first half, Tim Hardaway Jr. was able to settle down in the second half, finding his shooting stroke, despite the blowout loss. Hardaway Jr. shot 8-of-17 from the field (4-for-10 from three-point range), finishing with 21 points while also contributing three rebounds, three steals and one assist.

Going forward, with a relatively young and inexperienced team, Hardaway Jr. will be called upon to truly transfix himself as a focal point of the Knicks offense, providing a threat on the perimeter, while also utilizing his athleticism to penetrate the interior.

Over the four preseason games, Hardaway’s shooting efficiency has been on display as he has shot 48 percent from the field, averaging 16.5 points in that span.

Over the course of the game, the Knicks were able to shoot 9-for-31 (29 percent) from distance, proving to be the teams Achilles’ heel. Largely implicating themselves with poor shot selection, Dotson and Hardaway Jr. were the only two players who posted a respectable stat line in regards to three-point shooting. Lance Thomas and Ron Baker were the biggest vulnerabilities shooting 0-for-4 and 0-for-3, respectively, from behind the arc.

Moving forward, the Knicks best shooting strength results from floor spacing, garnering open looks for players like McDermott and Porzingis, while also letting shooters such as Hardaway Jr. and Courtney Lee get the bulk of spot-up shots.

The Knicks have a multitude of problems, but one of the better aspects of this roster is possibly its shooting.

Overall, this is something both you, the reader, and I, the writer, should expect–recaps for games you’d watch and hate before the All-Star break and games you’d just ignore after the All-Star break. Get used to seeing box scores like this in a season where you can expect the Knicks to be in full fledged tank mode by January.