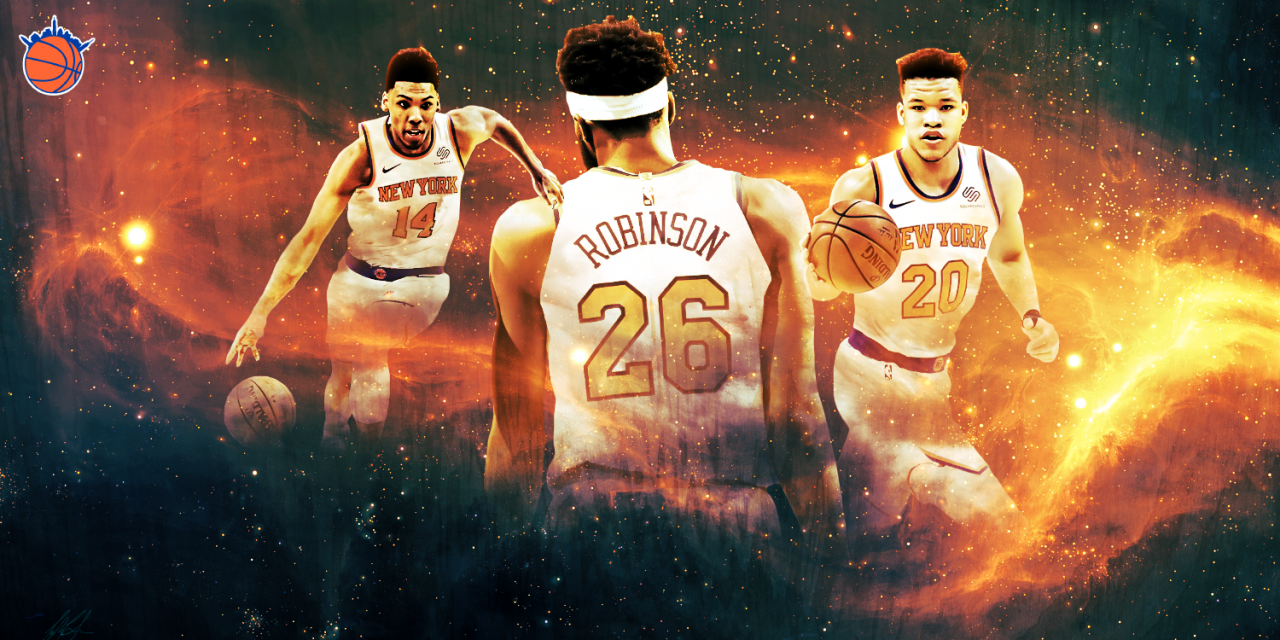 Kristaps Porzingis is out of the picture. It’s over. It’s official. “The Unicorn” is canceled; he has shed his horn and will graze on grass-fed Luka Doncic alley-oops in Dallas (can we call him “The Horse” now?).

If the Knicks’ future is a puzzle, there’s a gaping 7-foot-3 sized hole in the middle which the front office must fill with the embarrassment of cap space for which they traded Porzingis. But free agents alone won’t complete this jigsaw; New York needs its draft pick to pan out, and they need their rookies to show that they can be building blocks for a championship contender.

We graded their performance back in December. With the All-Star break fast approaching, let’s check back in on the rookies.

Robinson missed 13 games in a row—all of December basically—with a left ankle injury, so it feels unfair to judge him for a slow and unsteady return.

Still, Robinson’s rookie season, both prior to and after his ankle injury, has been erratic. He just cannot stay on the floor, mostly due to his foul issues and his poor grasp of NBA team defense.

Robinson does this kind of stuff all the time. It’s not that he’s reacting to the play a step slow, he just doesn’t know what he can or can’t get away with yet in this league.

The best interior defenders over the past five years—think: prime Marc Gasol, Rudy Gobert, Draymond Green at his most obnoxious—all have subtle, nigh-unnoticeable maneuvers (hand-fighting, a little elbow shove here and there) that they know the refs won’t call. Robinson, by contrast, attracts focus from the refs by reaching for dumb fouls like this.

Still, the dude’s ceiling is immense. He is the spitting image of a young Tyson Chandler, an impossibly long, bouncy roll man capable of protecting a rim by himself. Even with the foul troubles, Robinson is averaging 2.0 blocks per game. Like a rookie Chandler, however, Robinson is too raw to amount to any productivity on the court.

Trier’s play has fallen off since we first graded his performance, although like Robinson he missed extended time in December with an injury (hamstring).

In the 16 games following Trier’s return to the hardwood, he has scored in single digits nine times; troubling for a player so dependent on his ability to dig into the teeth of a defense and score off of dribble penetration.

Why the dip? Well, Trier basically went from the league’s best-kept secret to someone the league knows how to defend now. Already a high-turnover player, teams have been able to punish Trier’s sloppiness with the ball more than usual lately.

This is the most glaring of Trier’s Achilles heels; he’s a gifted improvisational ball handler, so he takes great liberties when driving, confident he can detangle his way out of a collapsing defense. Sometimes it works, and Trier creates opportunities out of chaos for himself and his teammates. Other times, it ends with a turnover.

Trier is a chronic “prober.” He doesn’t drive with any concrete plan. It’s what makes him fun, but it’s also what makes him problematic. He’s like a rapper freestyling off the dome. There’s not a sentence Trier can’t finish. But defenses are getting smart at making him run until his flow dies, without eloquence.

Out of all three rookies, Knox’ expectations have been altered the most by the Porzingis trade.

What did we want from Knox before? Not much. Everyone knew there would be a learning curve; he is, along with Jaren Jackson Jr. in Memphis, one of the youngest players in the entire league at age 19. An explosion once a month or so, like Knox’s majestic 31-point outburst against Philadelphia, was more than enough.

He won’t be burdened with “Unicorn” level expectations, but he is New York’s undisputed crown jewel now until the Knicks know where their 2019 draft pick lands (even with the worst record in the league, they’ll share the same odds at the number one pick as the second and third-worst teams).

Knox needs to step it up, regardless of pick position. If, for instance, the Knicks get the number-one overall pick and draft Zion Williamson, Knox needs to show that he can mesh with Williamson, who’d presumably become the future of the team. If the Knicks instead draft someone like Ja Morant, R.J. Barrett, or Cam Reddish, then Knox will need to prove that the team should build around him.

The two elephants in the room are the Knicks’ new pair of max-contract slots earned in the wake of the Porzingis deal. There’s a lot of positional overlap between someone like Kevin Durant and Kevin Knox—a partnership that might minimize Knox’s role on offense to a pure spot-up shooter, which he hasn’t shown any competency for yet as a 34.2 percent three-point shooter. It’s fair to raise questions about Knox’s fit alongside two ball-dominant superstars when no one knows what Knox does best yet. He’ll have to at least hint at it with the remaining 30-plus games left this season. Porzingis leaving has massively accelerated that timetable.

As far as his performance to date, Knox is a poor-man’s Rashard Lewis. Like Lewis, Knox is a lanky, athletic stretch big with legitimate guard skills. The only problem is that Knox isn’t even in the same stratosphere as a shooter yet, which cramps the rest of his game.

The good news is Lewis was a disaster his rookie season in Seattle, too. He shot just 36 percent from the field and 17 percent from three that year—Russell Westbrook numbers. And Knox’s ceiling is far, far higher than Rashard Lewis.

Lewis could never just put his head down and bulldoze his way to the rim in tight quarters like Knox does here. Not a lot of 19-year-olds have that in them, which is why Knox is such a tantalizing prospect. He flashes sporadic glimpses into a future in which he—not Porzingis, not Durant, not Kyrie Irving—could be the bedrock for the Knicks next ten years (along with the team’s lottery selection this year).

Most of the time, though, he’s a poor man’s Rashard Lewis, and with Porzingis out of the picture, that is a very troubling sign for Kevin Knox.