Rookies Continue to Shine as Knicks Sink Into Deeper Hole 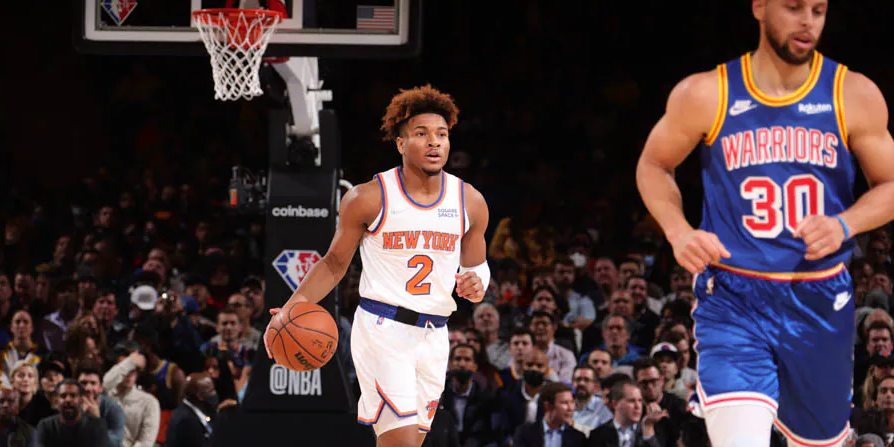 “Deuce” McBride right after Quentin Grimes, it’s the Knicks rookies’ time to shine amid a New York tumble down the standings.

NEW YORK, N.Y. — The New York Knicks lost on Tuesday night after Stephen Curry hit his record-breaking 2,974th three-pointer early in the first quarter for the Golden State Warriors. It was a moment that accompanied the Knicks’ fourth straight loss and also dropped them to an abysmal 5-10 from home on the year so far.

The Knicks have several players out due to health and safety protocols. RJ Barrett and Obi Toppin have already missed two games for New York, and neophyte Quentin Grimes missed tonight after breaking a record of his own at Madison Square Garden on Sunday afternoon. Grimes’ 27 points starting debut was a light in an otherwise dreary loss to the reigning champion Milwaukee Bucks, and tonight, another rookie shined: Miles “Deuce” McBride.

Knicks coach Tom Thibodeau expressed in the pregame press conference before tonight’s matchup that, given all of the outbreaks of COVID-19 across the NBA (and across sports leagues nationwide), he expects the same play and same effort from the team regardless of being shorthanded.

“We just gotta play as hard as we can, play unselfishly. There’s ebbs and flows to the season, just have to make the right plays…nobody’s gonna feel sorry for you,” said Thibodeau.

Enter Deuce McBride. McBride was touted as a defensive stalwart when he was selected by New York with the 36th pick in the second round of the 2021 draft class. In the G League, McBride has stood out as one of the better players for the Westchester Knicks when he has gone down to play with them this season, averaging nearly 27 points in his four games along with 8.5 assists, 6.0 rebounds, and 1.75 steals.

Even with these phenomenal numbers, McBride has not seen much playing time given Thibodeau’s style of short rotations and limited minutes for anyone not a seasoned veteran on his team. As a result, we’ve seen the frustrating play of shooting guard Evan Fournier (two points, 29 minutes on Tuesday) more often than we might like and a stagnant offense that could use a spark like McBride in the backcourt to push the pace. Tonight, however, McBride’s efforts (eight points, four rebounds) were certainly recognized by Coach Thibodeau and other Knicks players after the loss.

Knicks guard Derrick Rose, getting the start with Barrett out, also had nothing but good things to say after McBride’s performance.

“Deuce is a good player, man! His confidence is very high. His defense is top tier,” said Rose. “He just needs the time. Hopefully, Thibs gives him the time. It’s all about opportunity in this league.”

Rookie Jericho Sims had a stellar game against the Atlanta Hawks over Thanksgiving weekend. Rookie Quentin Grimes broke the record for Knicks rookies in three-pointers made in a single game. Now, rookie Deuce McBride has arrived with a defensive tenacity that resembles that of the Knicks team from last year that earned them the fourth seed in the Eastern Conference and brought them back into the spotlight. The proverbial ball is in Thibodeau’s court now to see the talent and depth he has on his team and to start rewarding them with more opportunities for growth and positive impact.