Rounding Out the Knicks’ Frontcourt Rotation 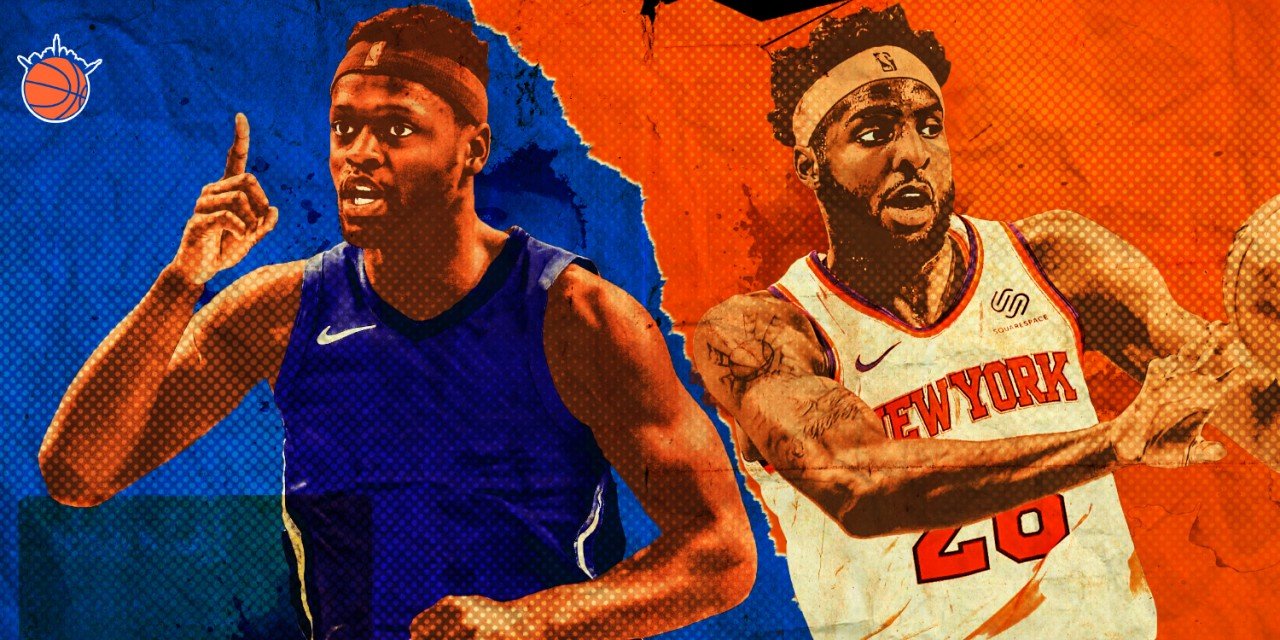 The Knicks splurged on big men in free agency this past summer mostly due to a vacant frontcourt aside from center Mitchell Robinson.

Over the course of this offseason the Knicks almost totally revamped their frontcourt. DeAndre Jordan left for an outer borough, Luke Kornet signed with Chicago after the Knicks renounced their rights to him, and Noah Vonleh went to Minnesota after having the best year of his career in blue and orange. Second-team All-Rookie selection Mitchell Robinson is the only holdover from last season.

This year he’ll be joined in the frontcourt by Julius Randle, Taj Gibson, and Bobby Portis—and Marcus Morris will also spend some time at the 4.

While a segment of basketball fans and media members mocked New York for adding four potential power forwards after making their Kyrie Irving and Kevin Durant ambitions so plainly known. However, as Morris will likely spend the majority of his time at the 3, and Randle, Gibson and Portis can and should play center when Robinson is resting or in foul trouble.

Randle and Robinson will start together once the season begins. If the first two games of the preseason are any indication, then Gibson will be the first big man called off the bench, but head coach David Fizdale seems to see Portis as a better replacement for Robinson when he can’t stop fouling.

Portis did not appear in the first game of the preseason when Robinson was able to play 28 minutes. In game two Robinson played just 10 minutes and because of it Portis played 29. Without reading too deeply into a pair of preseason game, Fizdale appears to have an early preference.

Although not one member of the newly minted frontcourt is a knockdown shooter, they’ll mesh better than they appear to on paper. Randle enters his sixth season on his third team, but this is the first time he will be the unquestioned focal point of an offense. His shooting improved last season—he made 34% of his threes on just over three attempts per game—but his playmaking is what allows him to share the floor with other big men.

Pick-and-rolls with Randle as the ball handler and Robinson diving towards the rim creates a matchup nightmare for opposing big men who aren’t used to navigating on-ball screens. Plus his willingness to push the ball in transition will create opportunities for all teammates. The Knicks have had four triple-doubles in the last decade; Randle could match that himself this season. He has six in his career.

Without Enes Kanter throwing up empty stats in front of him, Robinson steps into a starting role after a breakout rookie campaign. Outside of rookie first-round pick R.J. Barrett, Robinson is likely the player fans are most excited to see. After foregoing college Robinson went from being a top-ranked high school prospect to a second-round steal for New York.

He blocked 2.4 shots while averaging just over 20 minutes per game, although that would be closer to 30 minutes a game by the end of the season. By then, Robinson’s eagerness to get a piece of every attempt made in his vicinity was the only thing keeping him off the floor.

This offseason however, most headlines about Robinson were about his offense, not his defense. Robinson didn’t attempt a three last season, but reports surfaced that he had been working on shooting from deep during the summer.

“I’m shooting the thing now,” Robinson told reporters after the team’s first practice of training camp. “Why work on something you’re not going to use? I’m looking forward to it.”

The idea of Robinson becoming the stretch 5 that Kristaps Porzingis refused to be is enough to send fans into hysterics, but for the time being most should settle for anything that doesn’t look like his first two preseason games.

In addition to his game two foul trouble, Robinson’s made just three of his 10 attempts through the start of the preseason. Although, the ones he’s made have been a lot of fun.

This year’s Knicks team, while much improved from last year’s 17-win squad, is still about building for the future, and developing Robinson is going to be paramount to the team’s future. By signing Gibson, the Knicks added another adult in the room, one who has been deep into the playoffs on a defensive powerhouse. Tom Thibodeau’s Bulls were the closest thing in recent memory to the ’90s Knicks, which have been Fizdale’s muse going into this season.

Gibson’s value does extend beyond the locker room—he hit two threes in the first game of the preseason—but the Knicks are going to be one of the league’s youngest teams and are going to be looking to him and Morris for guidance. A fact that may lead to some fines in the future for the young core, but it’ll toughen them up for sure.

Rounding out the rotation will be Portis who fits the team’s pattern of scooping up former first-round picks who haven’t panned out. As stated, going into the season Fizdale seems to view Portis as the backup center, he’s the only player besides Robinson who is taller than 6’9”.

With so many young players, there are sure to be nights were they need someone to make a basket. Portis shot 40% from three last season, albeit in just 28 games; of their big men, he’s by far the best shooter, meaning he could also play alongside any other big man without wrecking their spacing.

However, he also showcased some of his worst habits along with his stroke from deep in his only preseason game. In 29 minutes he hit just three of nine shots from the field, but two of the three were from three-point range, and he hit seven of eight attempts from the line.

Additionally, while punching your teammate in the face is considered a bad thing, it does feel very ‘90s Knicks to do so.

While it’s far from the most modern frontcourt in the league, New York added an interesting mix of big men to play alongside their promising defensive center, and did so with reasonable moveable contracts. Randle and Robinson are here for the duration, unless something unexpected arises, but Portis and Gibson are both on two-year deals worth $15 million and $10 million, respectively. Both can contribute to this rebuild, even if they end up doing so by fetching the Knicks a draft pick or two.

Or keep them all around, lean into the jokes and throw out Randle at the point with Morris, Gibson, Portis, and Robinson. After all, the East is big, man.