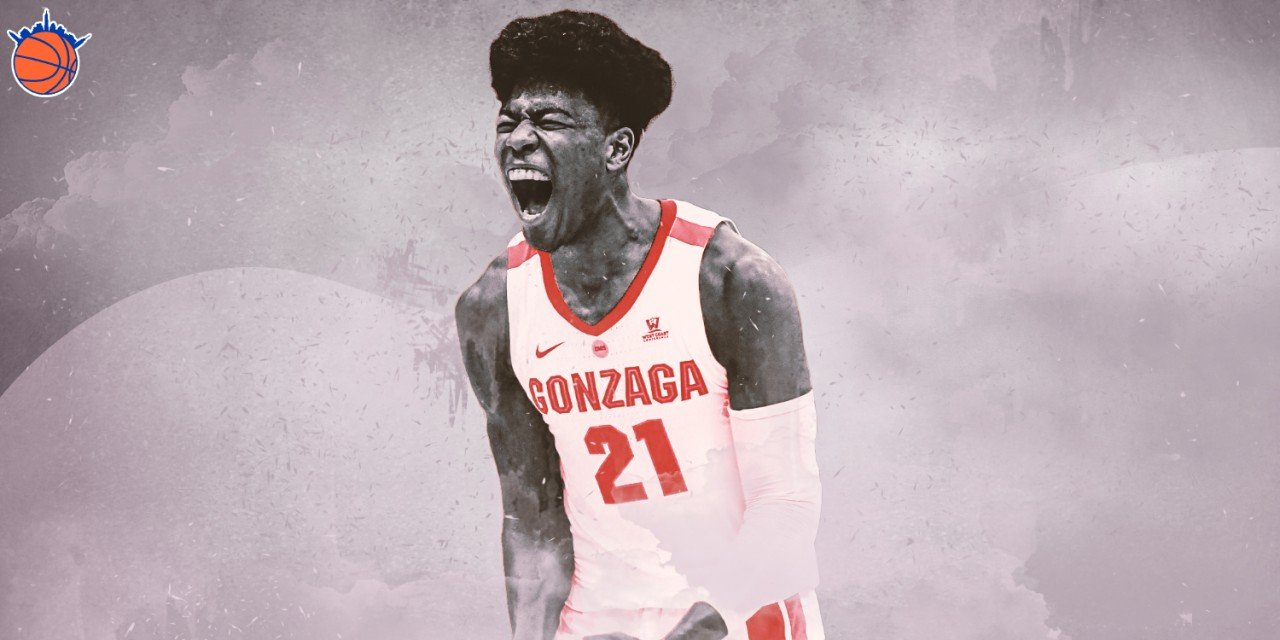 Rui Hachimura is an intriguing international prospect with college ball experience, too. The question is whether the Knicks could scoop the Zag in the draft with another pick at their disposal.

The Knicks Wall is setting a spotlight on the top prospects in the 2019 NBA Draft. Follow along with weekly features on the draft and players. Next up is Gonzaga forward Rui Hachimura.

International talent in the NBA has never been stronger. Basketball has seen a rapid expansion globally over the last 30-odd years, bringing an influx of foreign stars. With so many countries now being represented, it’s surprising Japan has yet to have a player to call its own.

Trailblazer is quickly becoming an ancient word, unless you play word association for things that trigger Russell Westbrook. But that is what Rui Hachimura is for his native Japan.

There have been Japanese players in the league prior to Rui. Yatu Tabuse, who had a cup of coffee with the Phoenix Suns in 2004, being the most recent, but none have been mainstays. Rui will be the first to have an extended stay.

Hachimura spent three seasons at Gonzaga. In those three years, he had a linear progression from end of the bench guy to top dog. His final year included being the first team to take down Zion and Duke, West Coast Conference Player of the Year honors, and the Julius Erving Award, given to the nation’s top forward.

His hard work has guaranteed him a spot in the first round alongside his Gonzaga teammate Brandon Clarke. Both are considered diamonds in the rough, although Clarke garnered more affection from draft buffs for his explosiveness and potential. Rui carries a potential of his own, with his 6-foot-8 frame and solid shooting stroke.

I know, I know: his name isn’t Zion or Ja Morant. It’s true that right now Rui and the Knicks don’t have much to talk about. The Knicks will be picking in the top five—well out of Rui’s projected slot at the tail end of round one. Still, due diligence never hurt anyone, right?

There have been rumors of Scott Perry shopping Frank Ntilikina on draft night in hopes of another first-round pick. Should the Knicks come into possession of an extra first rounder, Rui is someone the team could target.

What does Rui bring to the table along with a nation of fans at his back? I’m glad you asked.

*Jalen Rose is one of the few good ESPN employees left. He is also the king of god awful player comparisons usually reserved for the wastelands of Twitter. Every Jalen Rose Comparison pays homage to the most preposterous description of a player.

Hachimura’s playing time early on will hinge on how effectively he can shoot. It is the most polished area of his game.

Rui shot the ball extremely well at Gonzaga, although his shot selection will need some adjustment. His 41.7 three-point percentage is not fool’s gold per se, but it does not take into account how sparingly he extended beyond the arc.

His meager 36 three-point attempts this season were a career-best mark. A clean release and sound mechanics should put away any worries that Rui will not be able to adjust his game.

The adjustment he will have to make is his shot selection. The Knicks ranked 22nd in three-point attempts last season, and 28th in percentage at 34%. There is a void of shooters on the Knicks, and Hachimura can help fill it.

At Gonzaga, Hachimura found a nice comfort zone in the midrange where he proved effective on catch-and-shoot action such as this:

As well as pulling up off the dribble:

Jumper is a little flat but good patience shown by Rui Hachimura (@ZagMBB). Allowed defense to clear and gathers himself on extended block; reacts to what defender is giving him. Key is if he can make that jumper consistently. pic.twitter.com/rl49zmtbek

If Rui ends up a Knick, Fizdale will utilize him similarly to how he used Luke Kornet, or even Kevin Knox to a lesser extent—catching and shooting off penetration.

The current roster is not just barren of shooters, but scorers, period—particularly at the forward position. Hachimura still has some work ahead of him as he takes a significant leap in competition, but the pieces are there.

At Gonzaga he was at the top of the pecking order, leading the team in points per game. Rui is not blazing fast, but moves well for his size, and knows when to leverage his size on smaller defenders. He has some sneaky explosiveness to go along with sound shooting.

Rui has the size to play either forward position and should be deployed like Tobias Harris in Philly. Depending on the matchup, Hachimura could use his height to rise up over smaller wings or turn the corner on a slow-footed big.

There is a position-less appeal to his game. He seldom brought the ball up in college, but there were sequences where you saw a part of his game waiting to be unlocked.

Checkout this grab and go from Rui Hachimura. I understand the limitations and positional concerns, but this dude screams late bloomer to me. I contend that most are way too low on this kid. pic.twitter.com/KNDEmyYHdl

Fizdale showers his guys with freedom, encouraging a big like Noah Vonleh to handle the ball more. Rui could expect the same encouragement.

Defense is where the brakes start to get pumped on the Hachimura hype train. His 91.6 Defensive Rating would lead you to believe he is an above average defender.

Hachimura benefited from sharing the floor with Brandon Clarke, who was the most dominant player in college not named Zion. He did take strides last season, showing a slight bump in blocks.

He still falls in that purgatory of being neither quick enough to hang with the wings outside, nor enough of a presence to be relied upon to protect the rim.

I mean… this is a nice crossover by Matisse Thybulle but this defense from Rui Hachimura needs to improve pic.twitter.com/iam2l94ARV

Defensive highlights like this were few and far between:

With some work, in time Hachimura can become a serviceable defender. It will be rough early and better to hide him with plus-defenders.

When he’s asked to play the 4, which he will be, Hachimura will have to clean the glass. He was decent enough on the defensive glass, boasting a 16.9 defensive rebounding percentage. On the offensive glass, things get ugly.

Hachimura pulled down 111 offensive rebounds in three seasons at Gonzaga. To put that into perspective, he had 188 defensive rebounds this past season. Some of that could be the result of his shot selection being outside the paint, but for his size, those are rookie numbers.

If he were quick enough to play with two other bigs this would not be as serious an issue. Rui will likely share the floor with one other big or none in some instances. He will have to find a way to pump up those numbers.

Hachimura is a solid prospect. He has improved every season at Gonzaga and has been praised by his coaches as a hard worker. He is a little older than most of his peers, with the same amount of development ahead of him.

But when building the culture David Fizdale talks about—a championship culture—you need grinders and you need winners. Rui proved to be both and would be a value addition at the right price.

And that is where the current discussion lies. Rui’s arrival will come at the expense of Frank Ntilikina, or even Dennis Smith. Is that an exchange you are willing to live with?