Russell Westbrook and the Knicks: Is There Any Way This Makes Sense? 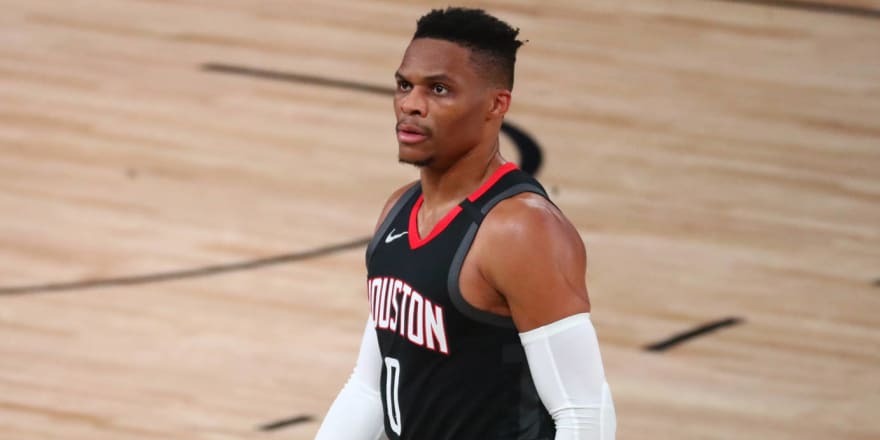 The Knicks are being heavily linked to Rockets trade target Russell Westbrook, the one-time MVP point guard. How could any of this happen?

According to the New York Times’ Marc Stein, the New York Knicks are viewed as a viable trade destination for Houston Rockets point guard Russell Westbrook. Earlier this week, The Athletic’s Shams Charania, said that Westbrook wanted out of Houston, citing the team’s offensive playstyle. The Knicks are one of the teams, along with the Charlotte Hornets who expressed interest in the nine-time All-Star guard.

The Knicks have oodles of cap space, and under the predictable road of acquiring bad contracts and draft picks could be attained in this move, New York wants a win-now deal under new team president Leon Rose and head coach Tom Thibodeau. Even as Westbrook declines in production, he’s still a talented player who can thrive under Thibodeau’s system and help the Knicks turn from an Eastern Conference cellar-dweller into a playoff hopeful next season.

Still, Westbrook’s contract is insane: three years, $130 million remaining, with the third year being a player’s option. The move effectively takes New York out of any big game hunting the next two seasons, while keeping an older, slightly less effective player on the books. As R.J. Barrett and Mitchell Robinson are expected to ascend and improve, Westbrook will be on a healthy decline. Still, history suggests the Knicks are looking to win at all costs, and Westbrook is one of the big names on the market.

Even the key benefit to this trade—the fact the Knicks won’t have to pay much to acquire Westbrook—doesn’t make much sense. Not only are you acquiring more money on the backend to tighten your flexibility, but Westbrook’s overall offensive game doesn’t mesh well with Barrett and Robinson, stifling their development. Even if the price is Julius Randle and Kevin Knox, the value for Westbrook on the cap sheet and offense isn’t worth it.

The question is more or less, how could the Knicks take on Westbrook’s contract with assets to make it work for New York down the road. Acquiring Westbrook pushes plans back with cap space, but it shouldn’t in terms of roster building. The Knicks will still have three picks within the top 40 of next week’s NBA Draft and several picks thereafter. How can the Knicks make it work out for them? Let’s talk about it.

When the Rockets traded Chris Paul for Russell Westbrook this past offseason, they decided to attach three first-round picks to Paul to get acquire Westbrook, severely hampering their ability to upgrade the roster or dump a contract, if needed. One avenue for the Knicks could be to take on the contract of Robert Covington and view him as the big asset coming back with Westbrook.

With Houston, Covington served as a big man in their “small-ball revolution,” but with the Knicks, his role would be as a stretch power forward who can seamlessly fit alongside Mitchell Robinson. Covington is an excellent defensive player, who doubles as an above-average shooter from the outside. Last year, Covington shot just 33.5% from distance but has made over 36% in each of the last two seasons.

Slotting Covington in at power forward would give New York the extra spacing it needs in the starting lineup, especially as Westbrook, Barrett, and Robinson all profile as below-average shooters. He also serves as a sneaky trade chip for a potential playoff team looking to add some defense, thanks to his two-year, $24 million remaining on his contract.

If the Knicks were to do complete a Russell Westbrook trade, the 2020 NBA Draft could be impacted, The acquisition of shooting would be much more important to the Knicks then ever before, just to provide balance on the floor and a bit more levity to Westbrook drives. That could bring the no. 8 pick back to someone who can space the floor. The name? Devin Vassell, the swingman from Florida State. Despite some wonky shot antics, Vassell has been the class’ lead “3-and-D” prospect, thanks to his combination of size, athleticism, and outside scoring. If the Knicks were to lean towards a Westbrook trade in the near future, the selection of Vassell might be able to cure some of those spacing woes.

This may also explain the recent buzz between the Knicks and Vanderbilt guard, Aaron Nesmith, in recent weeks. Despite missing most of his sophomore campaign with an injury, Nesmith showed elite shooting ability and is viewed as a mid-round pick, but was garnering some attention from the Knicks recently. A trade down would be in order to select Nesmith, but much like Vassell—without the defensive ability—acquiring Nesmith would be a wise pick to help keep defenses honest and space the floor.

Additional Compensation for the Knicks

In wiping almost $100 million in future money off of Tilman Fertitta’s books, the Knicks should come in aggressive and attempt to secure even more future assets from the Rockets. Here are just two suggestions:

From a Knicks fans’ perspective, the Knicks should avoid this move and attempt to make smaller moves that don’t completely submarine your flexibility moving forward. Also, I honestly don’t know how much better Russell Westbrook is in helping you win games compared to, say, Fred VanVleet.

However, we don’t have control and we can only go with what the franchise offers. The Russell Westbrook trade would be a tough pill to swallow because it hurts flexibility and Westbrook is on the wrong side of 30 with a game that doesn’t exactly fit modern basketball’s blueprint for success. Nevertheless, that doesn’t mean the Knicks can’t look to add future value from this trade to make the post-Westbrook Knicks a success. Between one interesting asset and two draft picks, the Knicks could come away with a good haul if the cards are played correctly.

For Leon Rose and company, it’s a risk but could benefit the Knicks if they can play the leverage game strong enough.

»READ: Knicks point guard profile: what’s next in the offseason?