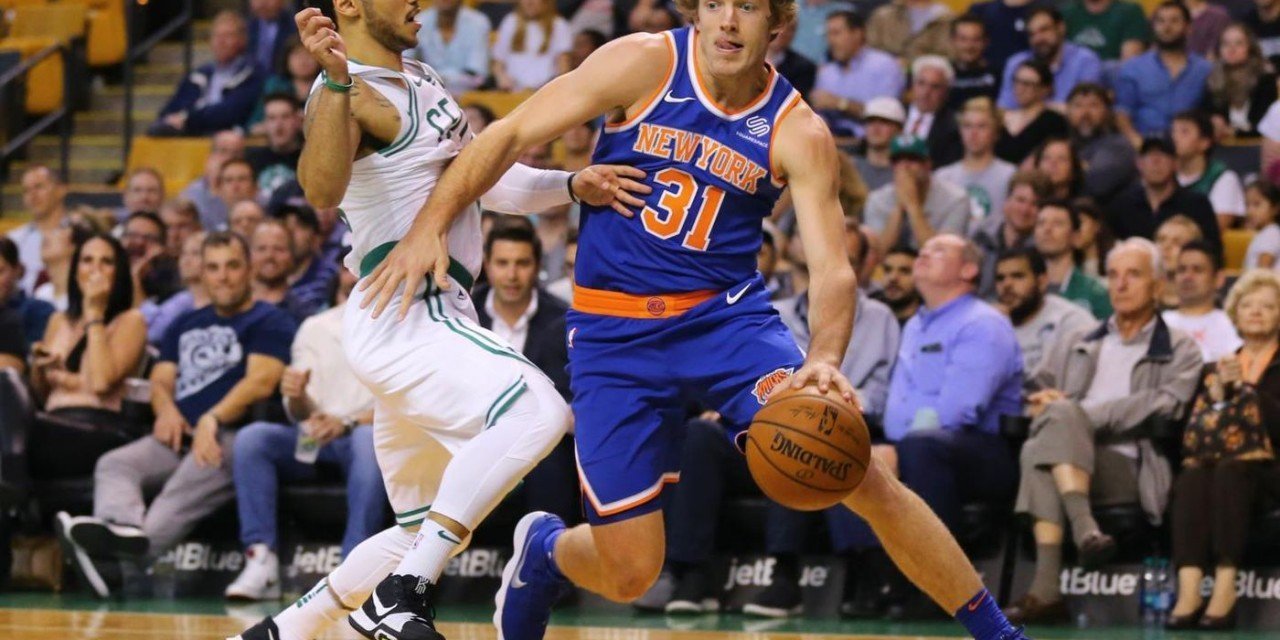 Ron Baker’s fierce, dive-on-the-ground attitude on the court was only eclipsed by his benchmob celebrations and internet-worthy expressions for the Knicks.

The Knicks agreeing to a two-year, $6.8 million deal with Allonzo Trier brought the end of the Ron Baker era in New York.

Since coming on board as an undrafted free agent in 2016, the wavy, golden-locked guard from Wichita State quickly became a fan favorite. Looking more like a surfer bro from California than a professional basketball player, Baker’s energy on and off the court was electric. As his career with the Knicks reaches a quiet conclusion, what better time to take a look at his best moments in the orange and blue.

The Legend of Ron Burgundy

During the 2016–17 season, Baker’s increased play time led to a shout out from Knicks star Carmelo Anthony—who referred to him as “Burgundy,” in reference to the main character in the 2004 comedy Anchorman, Ron Burgundy. It was a hilarious moment in an utterly disappointing season and one that made you realize the uncanny similarities between Baker and Burgundy’s hair.

With a lot of free time and accessibility off the court, alongside his energetic and enthusiastic personality, Baker soon became the Knicks go-to guy for hilarious social content and one of the best hype bench players in the NBA. Which included a few of these gems…

Need a pizza? Ron’s got you.

“If you utter so much as one syllable, I'LL HUNT YOU DOWN AND GUT YOU LIKE A FISH! If you'd like to fax me, press the star key.”

One of the best stages of the Baker tenure came during a brutal injury he suffered at the hands of an Anthony Davis poster. Rather than letting Davis take it to the basket, Baker did all he could to prevent it from happening. This play was the epitome of the type of player Baker is—a scrappy hustler at all times when on the court.

Unfortunately for Baker, he did not prevent the dunk. Instead, Davis threw it down with force and picked up the foul as well. As for Baker, he received an orbital fracture, which he showcased on his Instagram account the following day.

When you wake up and turn on #ESPN, and see you made @sportscenter Top 10 ??‍♂️! Ft: @antdavis23 #ThreeStitches #KnicksWay #W

You have to give credit where credit is due. Most players in the NBA wouldn’t have dared to confront Anthony Davis on a clear path to the basket. Baker did his best to stop the play from happening, and hustle efforts like this are what inspire a team. Even more impressive, he missed just one game due to the injury and returned as a new player; thus, MASKED RON was born.

His Best Game in NY

As fun as it is to poke fun at Baker, we must remember his most complete game as a New York Knick. This came on April 9, 2017, in a 110-97 loss against the Toronto Raptors. In this contest, Baker scored 11 points on 5-of-12 shooting while also adding eight assists and eight rebounds. It was an impressive effort for Baker, who was fighting to keep his roster spot at the end of a lost Knicks season—an effort that will sit in the memory of all Knicks fans when reminiscing about Baker’s career.

Thanks for the memories Ron, we wish you the best of luck in your future and hope to see you on the hardwood again soon!

Once a Knick, always a Knick.