Season Series Against Sixers Will Be Good Measuring Stick for Knicks 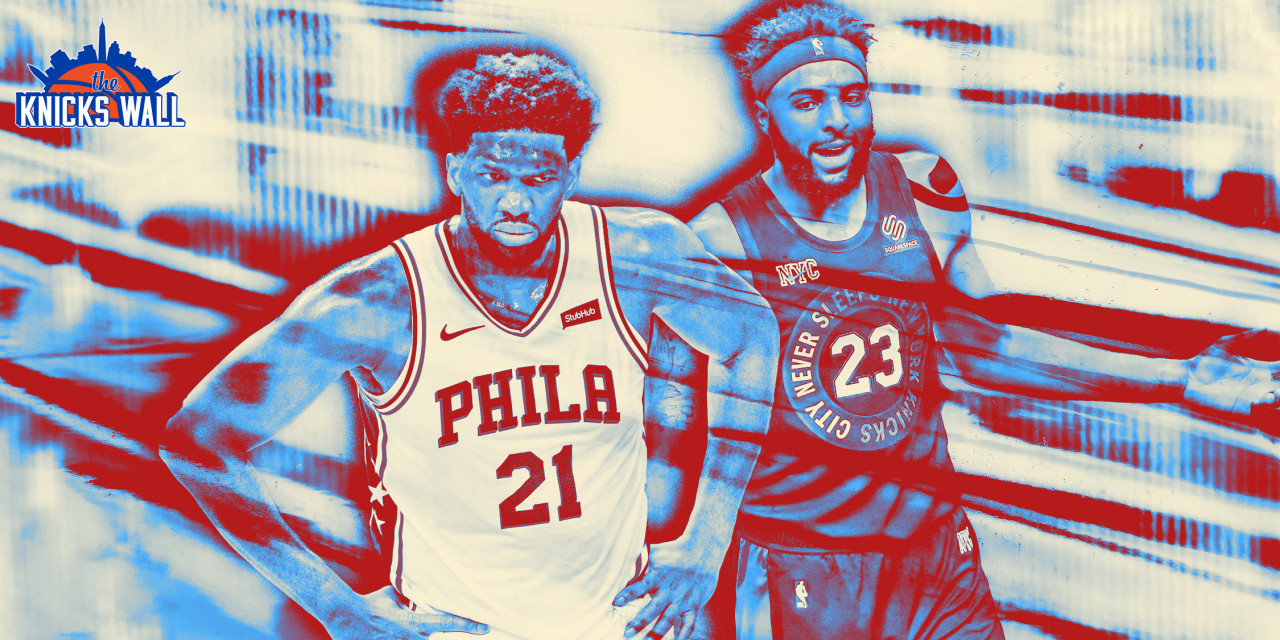 The Sixers are the messiest team in the NBA right now with Ben Simmons M.I.A. Nevertheless, the Knicks need to down Joel Embiid and co. to get ahead in the East.

The Philadelphia 76ers have owned the New York Knicks in recent years.

The last time the Knicks beat the Sixers, Carmelo Anthony was still a Knick. Since then, it has been 15 straight losses spanning over four seasons. Last season’s series had a bit of encouraging signs towards the end: the Sixers eked out single-digit victories in the final two meetings, with the final finishing in highly suspect fashion.

The Knicks were right on the cusp of getting a win. The game was a deadlock down to the final 5.3 seconds of overtime. It was then that a phantom loose ball foul call on Julius Randle helped seal a 101-100 victory and fourth straight season sweep for the Sixers.

Every team has another team that keeps them down, like a big brother always beating a little brother. The Sixers’ domination over the Knicks has had big brother vibes. If that trend is going to change, there are a few key areas where advantages can swing.

Before going any further, let’s address the elephant in the room: Ben Simmons.

A year ago Ben Simmons could have played his last game in Philly, with the possibility of being swapped for James Harden. That obviously did not happen, but the aftershock of that speculation has not gone away. Now it is Simmons who is ready to move on.

The resolution of the Simmons saga will dictate how tough the Sixers will be. On those nights Embiid was out, Simmons stepped into the captain’s chair to keep the Sixers at a high level. Without Simmons, that responsibility would shift to Tobias Harris. Harris is a good player, and someone the Knicks have had trouble with, but he does not do the things that make life tough for the Knicks like Simmons.

Simmons was, for all intents and purposes, an RJ Barrett stopper. His physicality canceled out Barrett’s strength, which tilted the matchups in Simmons’ favor more often than not.

RJ Barrett having polar opposite 1st half he had for Knicks in Indy. He's missed all 9 shots so far vs. 76ers (he was 8-for-8 for 20 pts vs. Pacers). Here he tries to get physical against Ben Simmons; it doesn't work, after he bullied Oladipo a few times. Barrett has 1 point. pic.twitter.com/FSWchda0j1

Should Simmons’ departure be legit, Barrett’s effectiveness could play a pivotal role. The Sixers can still throw Matisse Thybulle, among others, at Barrett, but no one can replicate Simmons’ class of defense.

For now, it appears that the Knicks do not have to worry about Simmons. It looks like Simmons is steadfast in his trade request. But the possibility of seeing him in a Sixer uniform once again should not be ruled out. As Andrew Wiggins’ recent vaccination proved, everyone is a gangster until that direct deposit doesn’t hit.

There is one sobering fact when discussing the Knicks’ chances against the Sixers: the Knicks have no answer for Joel Embiid.

This evergreen problem wasn’t as prevalent last season because Embiid missed two out of the three games. In his game, however, Embiid toyed with the Knicks on cruise control. Embiid scored 20 points in the first half and let his team handle the rest in the second half. And yes, Mitchell Robinson and Nerlens Noel both played. It did not matter. Embiid is that good.

The Embiid problem will not go away, no matter how much muscle Robinson put on over the offseason. Speaking of Robinson, it is not a guarantee that Robinson will be fully back by the first meeting on October 26th. Without Robinson, things could get even uglier down low, leaving Noel on an island.

There are two ways Thibodeau can approach his Embiid problem. The first and most obvious is throwing multiple bodies at Embiid. Noel, Robinson once healthy, Taj Gibson—maybe even rookie Jericho Sims. The Knicks’ greatest asset is their depth, and one thing Thibodeau can control is a fresh bodyguarding Embiid at all times.

The less obvious answer is allowing Embiid to cook while forcing every other Sixer to beat you. In the first game last season, Embiid feasted first, which opened things up for his teammates. Maybe the Knicks let Embiid get his 40 points, and instead focus efforts on slowing down Harris or the snipers who surround Embiid.

Closing games was an issue for the Knicks in general, and it reared its ugly heads against Philly. The Knicks blew a late lead thanks to a 26-14 fourth quarter in their 99-96 defeat. In addition to Julius Randle being the only steady scoring force, the Knicks never mastered a play that generated a great look late.

That issue may be past them with Kemba Walker now on the roster. Walker is a closing threat that frees Randle, Barrett, and others up late, making the team tougher to defend.

On the other side, you have the Sixers, who will have to adjust to late-game situations without their main facilitator. We all know Embiid is the first option, and Harris will be the main secondary threat, including the other team. Without another high-level player to help create good looks, the Sixers could face an issue that plagued the Knicks last season.

The next generation of New York versus Philadelphia can become a Kentucky affair. Immanuel Quickley wasted no time becoming a key player for the Knicks. Quickley will carry similar responsibilities this season (helping Derrick Rose lead the second unit) and assume new responsibilities (being ready to fill in at point guard at a moment’s notice) with a full year under his belt.

Thibodeau trusts Quickley, and quite frankly, he needs Quickley. The shots Quickley creates are unlike others on the roster. His range forces the defense to worry about him at halfcourt. Defensively there is potential, that if realized can raise his ceiling beyond the sixth man of the future.

Everything I just said about Quickley can be copy and pasted for Tyrese Maxey in Philadelphia. Simmons left a massive void in the playmaking department. Shake Milton figures to remain the leader of the Sixers’ second unit, which opens the opportunity for Maxey.

The Sixers need a playmaker like Maxey now more than ever. Maxey, like Quickley, is a two-way spark plug that can defend his position and score from anywhere on the floor. Doc Rivers has talked up his sophomore guard, but like Quickley, Maxey is still readjusting to becoming a facilitator again after spending his college days off-ball.

If both can take leaps as playmakers, Quickley and Maxey could find themselves in the thick of this rivalry, going head-to-head for years to come.