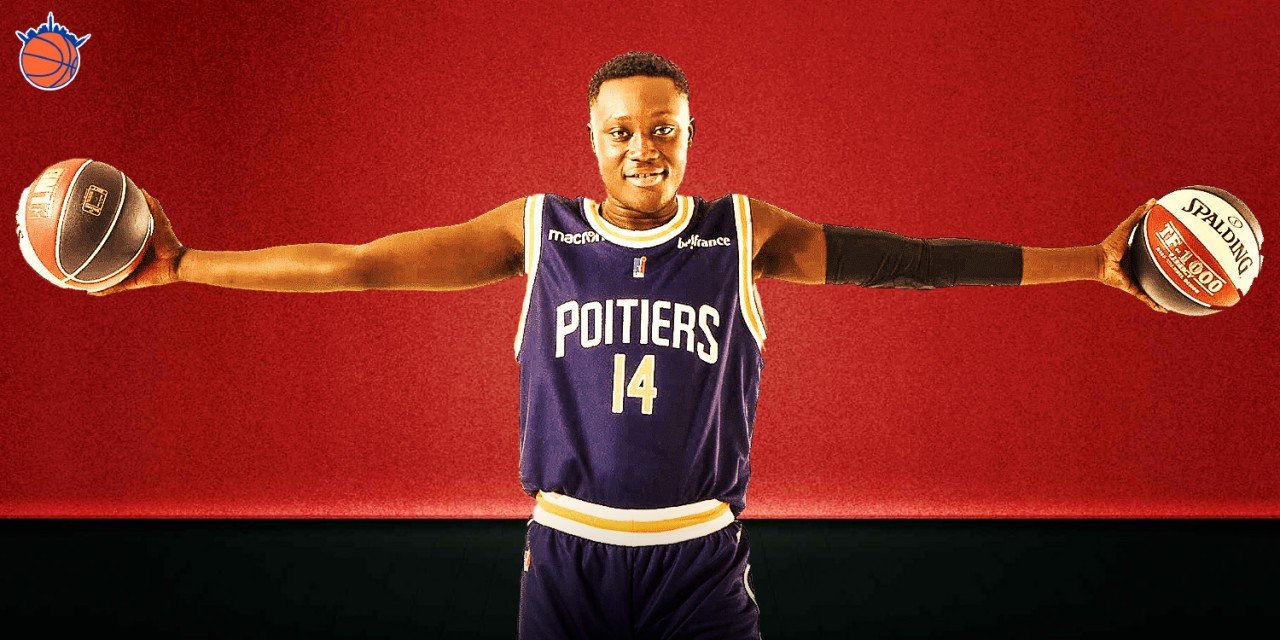 Should the Knicks trade back or acquire another lottery pick in 2019, they could select French national team player, athletic 18-year-old forward Sekou Doumbouya.

The Knicks Wall is setting a spotlight on the top prospects in the 2019 NBA Draft. Follow along with weekly features on the draft and players. Next up is foreign import, forward Sekou Doumbouya.

When God closes a door, he opens a window. The door to Zion Williamson slammed shut at last week’s draft lottery, and Knicks fans were sent scrambling looking for any way out. Is R.J. Barrett this proverbial window, or could it be a trade?

While rumors of bringing in Anthony Davis are going to draw most fans’ attention, the Knicks have more options. Trading back could allow the team to compile more assets while also adding another young prospect, and with all the focus on Zion—or now Barrett—practically every other player has been overlooked by the majority of Knicks fans.

Guinean-born Sekou Doumbouya moved to France when he was just one year old. After his height began to hinder his ability to play soccer, Doumbouya started playing pick-up basketball games at age 12. By the next year, he stood over 6’7” tall, and by age 15 he was playing professionally in France’s second-best league. Last season, he played in France’s top division, and last month he declared for the NBA draft.

So what could Doumbouya bring to the Knicks? The Knicks could snag the 18-year-old should they consider trading back or acquiring another first-round to draft the prospect in the mid-to-late lottery range.

Doumbouya has the prototypical size to be a productive two-way combo forward at 6’9” with a 6-foot-11 wingspan and NBA-level athleticism. Years of playing soccer have molded him into a fluid athlete whose long strides allow him to cover a ton of space on the defensive end, and his frame suggests that as he grows and fills out he’ll be able to guard 1-4 on the court.

Not one to shy away from contact on either end of the floor, Doumbouya can finish strong at the rim and bang in the post at either end. He also has terrific instincts when it comes to being the weak side shot blocker:

This is the best Sekou Doumbouya defensive play I've seen in a LONG time, maybe ever.

(Also, love the flash to three after the pick and then hitting the roll. I wonder if the weakside 3 would have made the layup if he had cut sooner and roll didn't have to fully turn to pass.) pic.twitter.com/BgzfS6VW9q

A high-motor athlete, Doumbouya is always a threat to attack in transition and has shown the ability to blow by his defender as a slasher. He can play above the rim when jumping off one foot or two. Whenever Sekou can grab a defensive rebound, he’ll be a threat to take it end to end on plays that show shades of a raw Pascal Siakam.

It's not one of the most important skills to possess, but Doumbouya's ability to burst into transition after turnovers and rebounds will likely be one of his main skills early on.

Like Siakam, Doumbouya is a willing passer, and his ball handling is improving, even though he’s currently most effective when driving straight to the rim. Also, while he has a soft shooting touch, Doumbouya only shot 28.9% from deep last year. He’ll have to improve in both these facets in order to reach his ceiling.

Doumbouya’s upside is quite exciting, but at times it’s painfully obvious that he only began playing basketball fairly recently. Like most young European prospects playing professionally is a gift and a curse. Playing against grown men has prepared him for the physicality of the NBA better than most college players, but it also makes him the low man on the totem pole. This past season he played just over 17.5 minutes per game.

The lack of in-game reps shows in Doumbouya’s basketball I.Q. He’s often relying on pure instinct when on the floor, and as someone who’s still relatively new to the sport, Doumbouya’s struggles with his fundamentals are to be expected. The hope would be that investing a first-round pick in Doumbouya means the Knicks’ coaching staff would work with him on these skills more than his European club. Why spend time developing young players who are about to leave for the states?

At this point, Doumbouya is more of an athlete than a basketball player, and it shows in the halfcourt. He plays his best in transition when he can get straight to the rim. His first step isn’t quick enough to blow by most defenders, and he has trouble getting his own shot. However, he’s still growing, and definitely not comfortable in his own body yet. His ability to score one-on-one should improve as he fills out.

As previously mentioned, despite his good touch, Doumbouya is a below-average shooter with questionable mechanics—and he knows it. Doubt in his own scoring ability manifests as occasional overpassing, which leads to too many turnovers.

Doumbouya has the tools to be a versatile, disruptive stretch-four à la Draymond Green or Siakam. Unfortunately, he doesn’t yet have the other skills to fall back on. If he doesn’t develop a better feel for the game and can’t hit a respectable number of threes, then he’s going to struggle to stay on the floor regardless of the situation.

With so much of the Knicks’ future hinging on free agency, it’s hard to predict how Doumbouya will fit with next year’s roster. He could end up another project on a rebuilding squad, or subbing into the game to relieve, say, Kevin Durant. While the win-now mindset that accompanies Kevin Durant would likely prohibit the Knicks from drafting such a raw talent, Sekou’s switchability could make for an interesting frontcourt combination.

Conversely, should the sky fall and Knicks strike out in their pursuit of signing two top-tier stars, the team could decide that rather than overpay for someone they didn’t see as a max player, they’d instead focus on their collection of young prospects.

While a Ntilikina-Dotson-Knox-Doumbouya-Robinson lineup may be too offensively anemic to play for long stretches, the defensive potential is undeniable. It’s a lineup could potentially switch 1-5, and that collection of lanky limbs flailing around the court is enough to give any opposing player second thoughts about making a pass.

Additionally, Doumbouya and his countryman, Ntilikina, already played together, winning gold medals for France in the 2016 FIBA Europe Under-18 Championship in Samsun, Turkey. Rumors of an impending Ntilikina trade have started up again, but nonetheless, the two thrived together. Doumbouya was the tournament’s youngest player and averaged a team-best 17.8 points, 7.0 rebounds, 1.3 steals, and 1.2 blocks in the competition. Both were named to the All-Star Five, and Ntilikina won Finals MVP, putting up 31-4-3.

Doumbouya could be a high-risk, high-reward pick, but after Ntilikina and Knox’s struggles, most fans are likely looking for someone who could contribute immediately. All reports indicate that the Knicks are destined for Williamson’s teammate R.J. Barrett. While Barrett has his own weaknesses, there’s a reason he came into his freshman year ranked above Zion.

Yet all options must be considered. If another organization falls in love with Barrett, the Knicks should at least consider moving back. And if they do, Doumbouya and another couple of picks could end up as a winning haul.