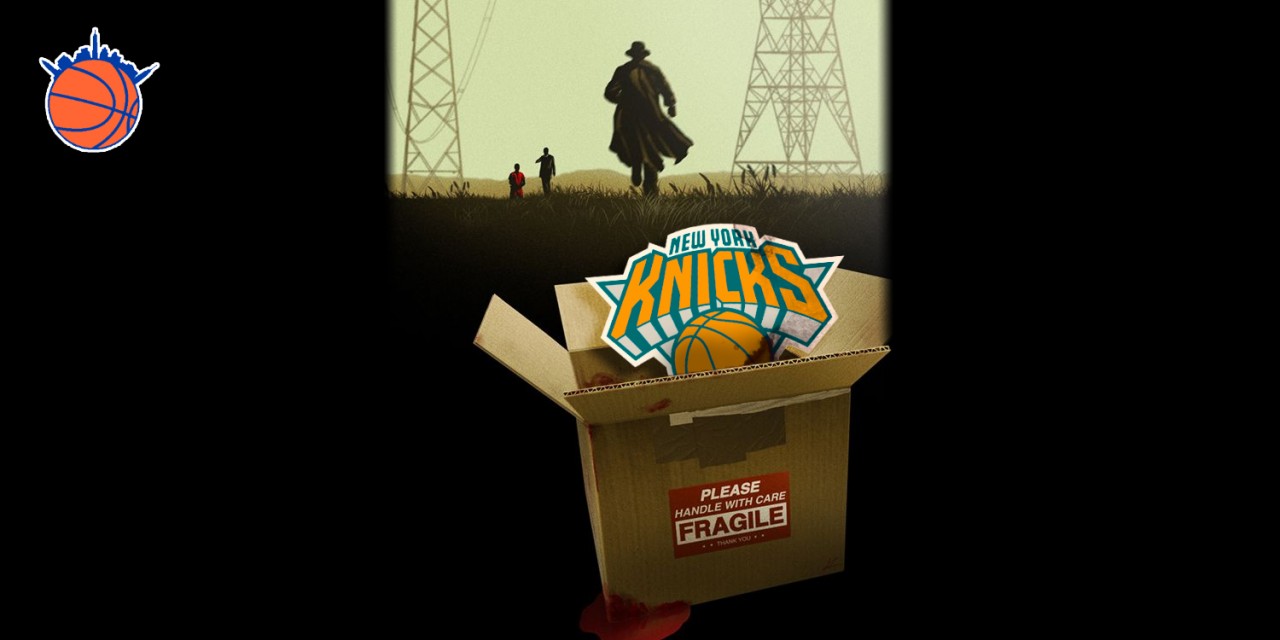 With the 2019–20 NBA season effectively over for the Knicks, the past campaign had several blemishes that must be addressed going moving forward.

The 2019–20 NBA season—assuming it is over for non-playoff teams—was not kind to the New York Knicks. It featured unfulfilled dreams, coaching changes, front office changes, ill-advised press releases—just about everything besides winning.

As we take a retrospective look at what could have been, what was, and what lays ahead, now is as good a time as any to see exactly what went wrong. To be clear, this was not a redux of the 2018–19 season, there was a marginal improvement in the win column, but only a fool watching through rose-colored glasses could truly be happy with a 21-45 record.

The share of the blame extends beyond the players. The front office possesses the lion’s share, and the coaching staff had their portion of poor decision-making. To best capture the collective folly and move on to new beginnings, let’s take one last look at what went wrong by reviewing the seven deadliest sins the team, as a whole, committed.

If you feel that the free agency failure and hastily composed Kristaps Porzingis trade has come under enough scrutiny, you’re wrong. It remains the single greatest reason the season went how it did.

When Steve Mills and Scott Perry made that trade they went all in, which isn’t the problem—the problem was they put their chips in sooner than they had to. A blueprint for what the front office should have done was what OKC did with Paul George. Whether Porzingis signed that one-year tender as he threatened—which would have been a ballsy move by someone coming off major knee surgery—he could have remained under club control of some sort. It is hard to believe the Mavericks still don’t make the Porzingis trade a few months later in the summer.

Because of their haste, the Knicks’ backup plan for striking out in free agency went from Porzingis and draft pick to Julius Randle and draft pick. R.J. Barrett was the right pick at three, only it hasn’t felt that way all the time. A major reason for that is he shares the floor with someone who is a bigger version of himself in Randle.

Barrett and Porzingis are an infinitely better pairing (not to mention Mitchell Robinson’s existence). Randle’s rumbling playing style doesn’t really mesh well with the team’s future, Porzingis’ stretch-the-floor shooting did, and that is a mistake that should not be forgotten.

The free agency folly bled into poor roster construction. Randle was signed what felt like seconds after Kevin Durant signed with Brooklyn. Marcus Morris was an eleventh hour signing and a good one–Morris was the team’s best player most of the season. Taj Gibson is a great veteran, and one of the veterans that should have his option picked up. Bobby Portis was … signed, too.

Knicks fans screamed in objection at jabs about the team signing four power forwards, but the end result was a predictable one: none of the pieces fit well together. Independently these are not bad signings; each player had his strengths. The problem is their strengths were the same as each other. The trio of Portis, Randle, and Morris shared the court a lot more than anyone expected and was part of the team’s second most-used lineup this season.

Beyond the stupidity that each of these guys helped in blocking Robinson’s minutes, it wasn’t a good fit. Portis was often nonexistent on defense and Randle had his lapses. Morris and Portis occupied the same spaces on the floor, and Randle’s cold shooting shrunk the floor, especially if Barrett and Elfrid Payton were in the ball game.

The cherry on top was Portis and Morris being on one-year “prove it” deals. It is easy for each guy to justify this season as an audition for a more secure financial situation. Unfortunately, while that mentality could have yielded Morris a big payday, and maybe even Portis a contract elsewhere, it never manifested into a cohesive attack on the floor.

Poor ball movement is typically a player-specific failure. This particular case is a bit different, it was a healthy mix of poor coaching, poor roster construction—what else did the front office expect from a roster filled out with veterans on expiring deals?—and chemistry. The stagnation on offense was a culmination of every failure before a single minute was played.

David Fizdale’s offensive system was as identifiable as Manti Te’o’s girlfriend, however; if it had to be categorized as something, isolation-reliant would be the best description. This type of system may have worked out really well with Durant and Kyrie Irving leading it, or even Porzingis and Barrett. It did not work well with Randle, Morris and Barrett leading it.

The Knicks ranked low in assists per game (27th), total assists (26th) and assist percentage (27th). Part of the problem had to do with Payton missing a lot of games, and there being no viable lead-guard backup aside from Frank Ntilikina, who also missed stretches of games with a nagging groin.

Barrett was the best playmaking option when Ntilikina or Payton were out, but it took away from his offense. Too often the offense would resemble an open gym run, with each guy looking for theirs. It is why the top priority heading into the draft is addressing a long-term solution at lead guard.

Perhaps the most egregious of all the sins committed by the team this season, keeping Mitchell Robinson with the second unit might be on the top of the list. Robinson is not only the best of the young guys, he was the best player of the team on paper.

In his sophomore campaign Robinson saw a marginal increase in his minutes per game, averaging 23.1 compared to 20.6 as a rookie. What Robinson did with his minutes was truly remarkable; the second-year center led the league in field goal percentage at a jarring 74.2%, in addition to remaining near the top in rim protection, blocking 119 shots, good for sixth in the league.

Clearly Robinson should have started. Taj Gibson was a solid spot starter yet interim coach Mike Miller seemed to like what Gibson was doing in the starting lineup, and loved what Robinson was doing off the bench.

“We got into the decision the other night, should we go ahead and start him now or keep him in his role,” Mike Miller said when asked during the season about bumping Robinson into the starting lineup. “We kept him in his role and then started him in the third quarter and he put together another good game. Taj (Gibson) has gotten us off to great starts. Sometimes it’s a matchup… But for the most part it’s because Mitchell is so effective in the role that he’s playing. We just haven’t been put in a situation where we think it’s time to change it.”

That change didn’t come this season with Fizdale or Miller at the helm. Whoever is named the next head coach better make starting Robinson his first priority.

There was a moment in time when the Knicks were not a mess on the court. In fact, they played quite well once Miller took over, and when stopped playing well no one from the locker room was creating headlines. That void was filled by the public relations department.

A normal entity uses press releases mainly as a conduit to announce organizational news. The Knicks instead used it as their own personal Notes app.

Was it really necessary to put this out?

Statements from the New York Knicks and Steve Stoute pic.twitter.com/jDN07qHllO

For clarification purposes, it is not true that the New York Knicks offered Richard Jefferson a contract in either the summer of 2018 or 2019.

The point of the public relations department is to enhance your image, not besmirch it. As difficult a task as making the Knicks look worse in the year 2020 can be, the PR team certainly pulled off the impossible.

“Bully ball is back!” was the proclamation many Knicks fans, including yours truly, made over the summer. Julius Randle was supposed to be the centerpiece of a pivot that was intended to be competitive. The Knicks were far from competitive, and Randle had the tough task of shouldering all the blame—and some of the endless ire he received from fans during the season was warranted.

Remember when you were first learning to play Madden and your first instinct when a defender approached you was to button mash spin? That’s what Randle spent the opening leg of the season doing. His general awareness on the floor was confusing, and gave fans flashbacks of Enes Kanter.

Randle’s ball dominance mainly frustrated fans, or so we thought. A recent report from Marc Berman of the New York Post stated that Randle’s teammates were frustrated with his over-dribbling and slow reads. With the exception of Payton, there is not one player you can point to and say has a good rapport with Randle, a pretty damning indictment from a guy who played the 22nd-most minutes in the league this season.

Recent success stories from Westchester have nicely hid the Knicks’ unwillingness to utilize the G League to develop their young players; remember, this is the team that wouldn’t even send Willy Hernangómez to the G League.

There are only two reasons to explain why so few players are sent down to the G League and of that few all are either undrafted free agents (Kenny Wooten), second-round picks (Damyean Dotson, Ignas Brazdeikis), or reclamation projects (Trey Burke). Not one first-round pick has been sent down, which is a bit puzzling since the team spent their 2017 and 2018 first-round selections on project picks.

Ntilikina was never sent down, even when he was chained to the end of the bench by Fizdale, and this season Knox was not sent down despite starving for minutes. How is watching conducive to development?

The good teams use the G League. Starting players on better teams than the Knicks spent the early part of their career in the G League: Dejounte Murray, Khris Middleton, Rudy Gobert, Fred VanVleet, Pascal Siakam, and on the list goes. None of those guys played a full season in the G League, but they still played. That is all the Knicks had to do with Knox.

Knox is still a blank canvas two years into his career, and the team plays a large role in that. Not playing Knox much this season made sense with Morris, Reggie Bullock and later Maurice Harkless on the roster. What didn’t make sense was allowing Knox to collect dust on the bench instead of going up to Westchester to get reps.

The team took this approach with Dotson, who at times would play for the DubKnicks and attend Knick games later that night, and Dotson has been a consistent role player when given the opportunity. The main issue with Knox is he hasn’t found his niche. There is no better place to experiment and get live reps than the G League.

When used properly, the G League can be an academy for the organization’s promising young players. The Raptors have taken this approach, and developed two of their four most important players, VanVleet and Siakam. The Knicks can pivot to this immediately and truly build a core from the ground up, or they can continue to throw their young guys “into the fire” and allow fate to run its course.