Shaking Out the Knicks Backcourt Rotation 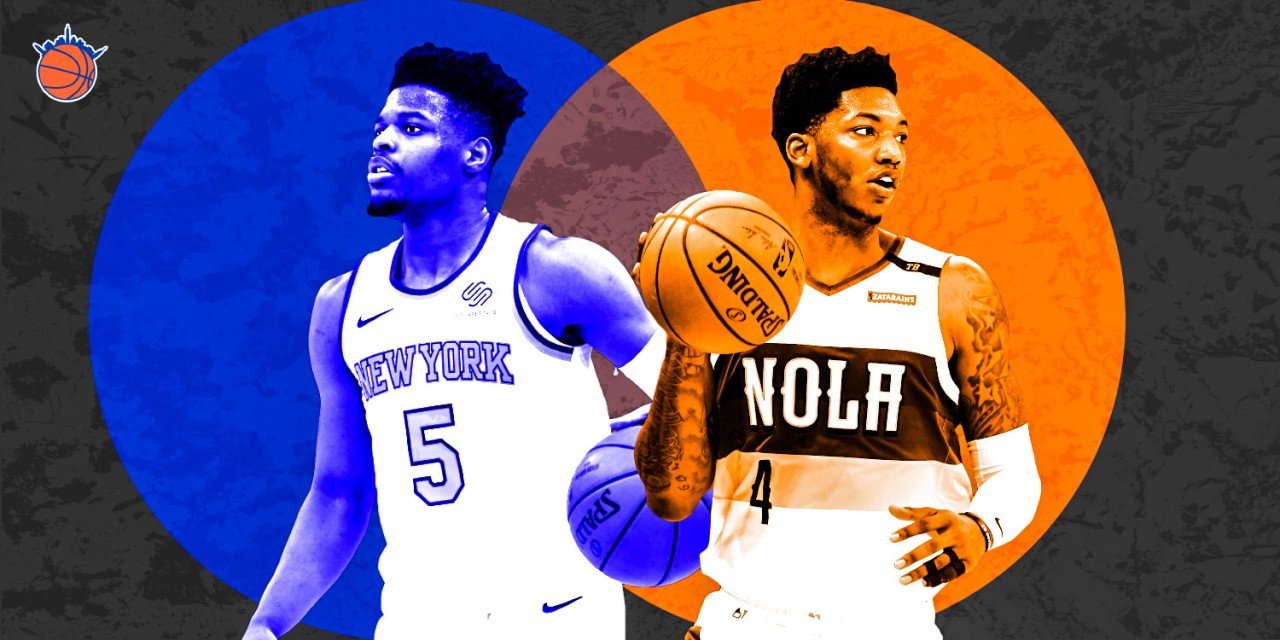 Besides the well of power forwards signed this offseason, the guard depth on the Knicks will be a battle for minutes too.

The Knicks aren’t going to be a good team next year, but they’re going to be a deep team. With no aces at the top, a deep team of role players won’t mean much in terms of results, but it will mean some serious battles for minutes.

The team’s taken a lot of memery for signing four guys who are most comfortable at power forward, but the depth at the guard positions means there’ll be some real competition there too. Here’s all the mouths to feed:

That’s eight guys, six or seven of whom could be playing real minutes on almost any NBA team.

To start to try to make sense of how Fizdale is going to piece together this squad, here’s how their minute load and positional responsibilities broke down last season:

Minutes and positional load breakdown of the guard rotation in the 2018-19 season: pic.twitter.com/R9be2szyTT

There are six players in the rotation who played more than 22 minutes a game last year, so some are definitely going to take a hit.

Let’s start at the point. There are 48 minutes to go around, and both Payton and Smith are most comfortable with the ball in their hands. Payton has played almost exclusively point in his career and is a non-shooter from distance, outside of one hot stretch to end the season with NOLA that brought his percentage up to 31.4. Smith operates best as a point man, too, as he wasn’t much of a threat as a shooter off-ball last year and was reportedly disgruntled with playing off of Luka for stretches in Dallas.

The battle for point guard minutes will fall mostly to those two, as SNY reported that Payton will have “every opportunity” to earn the starting point guard job. There’ll be some spot minutes left for Ntilikina, Trier and Barrett, but I’d guess one of the pure point guards earns 24 minutes and the other earns 20, with a few at the 2 for Smith. He’s re-worked his shot from the ground, up this summer. It usually gets worse before it gets better when you alter the foundations of a young player’s shot, though.

Frank Ntilikina was mostly the odd man out in Fizdale’s circuit last year when Mudiay, another Scott Perry draftee, snatched over 20 minutes of guard play a night. He figures to be one of the odd men out in this rotation too, with the acquisition of a solid distributor and attacker of the basket in Payton (50% FG at the rim). It’s unlikely Frank surpasses either of the two young pure point guards in the rotation, so he’ll probably split a little time across the two guard positions, with some at the three if Fiz wants to use him as just an ace defensive stopper swingman—as Ty Jordan recently suggested. That takes away a lot of his defensive advantage, though, because a 6’6” guy with a 7’0” wingspan doesn’t intimidate the bigger 3’s as much. Fizdale has been attending a lot of Frank’s workouts this offseason, but he likely won’t break consistent minutes unless he can finally show some of that aggression the head coach likes to see.

R.J. Barrett is a more interesting case. He figures to get a good chunk of minutes as one of the Knicks’ crowned prospects, split mostly between the 2 and 3, but will occasionally get to run a bench mob as the point guard (this is not a slight, because the bench mob will on many nights be better than the starters). In Summer League, Barrett showed himself to be much more comfortable driving and getting to his spots off the catch than with the ball in his hands.

It's so clear how much better RJ Barrett is at attacking off the catch rather than in iso situations. He's a talented player & there is legit upside w/ him but the Knicks need to recognize how to ideally use him to get the most out of him

He was limited by his lack of speed and burst, as he often had to rely on turning his back and using his physicality to get around his man in Summer League contests. But he did show some skills that portend positively for his ability to run the show in spots. He can make plays with his positional size advantage when he runs point, as he can see and find creative angles to flip passes over the top to cutters. He also made a few passes in Summer League that I never saw him make at Duke.

He’ll probably play around 17 minutes a night at shooting guard, with eight at small forward—since our depth there means guys like Marcus Morris, who contribute to winning ball, will be pushed down a spot to small forward and a few at the point. I foresee there being some nights in which Barrett gets benched for lack of defensive effort. Fizdale loves to teach lessons, and those instances will open up a few more minutes for the guys closer to the back end of the rotation.

Damyean Dotson played decently more minutes than either Ellington or Trier, but he actually played most of them at the 3. Again, he’ll get squeezed out by Morris, Knox, Bullock, and a bit of Barrett, but his defense and shooting are too good to leave out of the rotation. He should find at least 20 minutes a night between the two spots.

Trier should be useful in exactly the role he played in last season, albeit with a slight drop in minutes. When the team is in need of scoring, he can get you buckets. He’ll be a nice spark plug off the bench and log most of his minutes, probably around 15 a night, at the 2. He needs to improve his vision when he gets in to the paint to become an even more dangerous threat off the bench. Developing into a Lou Will caliber player doesn’t seem out of the question for Trier, if he can learn to read defenses better and create chemistry with a big like Lou did with Harrell on the Clippers.

I expect Wayne Ellington to nab about 15 minutes a night, as his 37%+ shooting from deep and veteran calm on the court will help open things up for the Payton, Smith, and Barrett to attack the paint. He’ll probably take a backseat in the rotation near the second half of the season, and there’s reason to believe the Knicks will cash in on some of their veteran three-point shooting acquisitions to playoff teams panicked for shooting at the deadline. Things would open up a little bit more for the young guys if Ellington, Bullock, or Morris are moved.

Don’t be deceived by Kadeem Allen’s almost 22 minutes a night last year, because he only appeared in 19 games, mostly as a tryout near the end of the season. He shouldn’t factor too heavily into the rotation this time—maybe at the end of the year again.

These are rough estimates of how the rotation could shake out. It’s likely that someone, be it Frank, Ellington or Dotson, will be dropped entirely, and the others will certainly get their minutes bumped from last year.

For a team that has so long been deprived of star guard power, the Knicks now have a roster of young, competitive studs who will compete their asses off for minutes. None of them are guaranteed to be positive players on the floor, but they’re all pretty solid, and most are at a similar level.

A lot of them are shot chuckers who can be black holes at times, but the Knicks have set shooters to balance them out. All it takes is two guys to get hot at the same time. Morris can go 4-of-8 from deep any given night, and so could Ellington, Dotson, or Smith. Payton can be driving well and opening up things for others, and so could Barrett off the catch. Some nights it won’t be pretty, but there’s a lot more shooting on this year’s team than last year’s, and Vegas has the Knicks penciled in for more than a ten game jump in wins.

The minutes battle should, at the very least, be fun to watch unfold.

»READ: What went wrong with the Knicks this offseason?