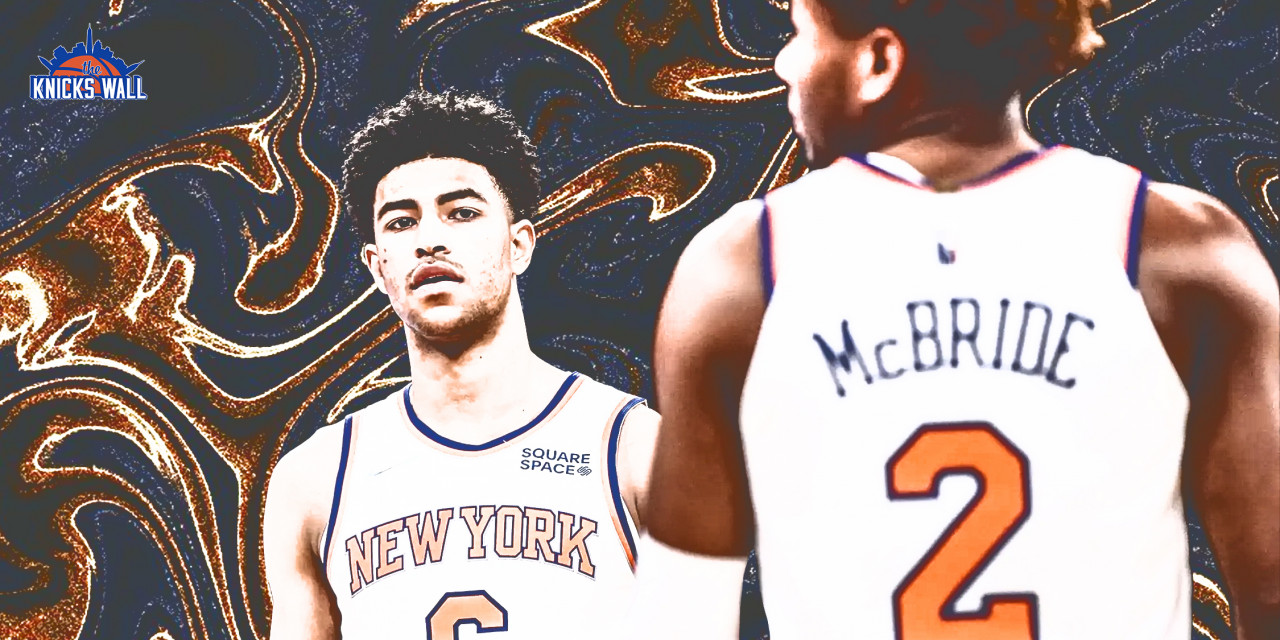 As the Knicks continue to struggle outmatching opponents, maybe it’s time to put their younger prospects in the limelight.

The New York Knicks have underperformed compared to expectations this season and there is no one reason or person to blame. However, as is the nature of the NBA, the attention has to go somewhere. While Leon Rose is not blameless and the tide has begun to turn on him in regard to certain decisions that have been made, all eyes have been on Tom Thibodeau.

Going back to his days in Chicago, Thibs has garnered a reputation for not only having a tight rotation but also being notoriously stubborn. For some parts of his career, this has paid dividends as he has pushed his agenda and had a loyal troupe of players to fill the necessary roles and play his style.

That takes us to this season, where things have not gelled with the new roster as well as one would have hoped. Again, there is not one issue at play nor is anything catastrophic occurring on or off the court, but there is enough struggle to warrant changes. That is where every New Yorker with a Twitter comes in, thinking they have the right ideas to help this roster. Whether it is roster changes via trade, changes to the starting lineup, or rotational management shifts, there is no shortage of possibilities for this organization.

RJ Barrett and Julius Randle have not shown the sustained growth or success of the expectations that had been thrust upon them. However, they are still contributing at a high level and there are no doubts that they are still at the forefront of this organization, and the Knicks’ long-term and short-term success still depend on them. So what changes are there that can be made within the rotation?

We have already seen Kemba Walker be pulled out of the starting lineup as well as the rotation as a whole along with a starting lineup shift of Nerlens Noel replacing Mitchell Robinson. While it remains to be seen what that means for Mitchell Robinson, it is safe to say that we have seen the end of the short-lived Walker Knicks era. That was disappointing for many as New York’s favorite son returned home where he had so much success in the Garden throughout his collegiate career. While it was a match made in heaven on paper, it was a couple of years too late for what the Knicks actually needed. So, where does that leave the Knicks and what can they do in the wake of the veteran guard’s absence in the rotation?

We have seen Alec Burks take the role of starting point guard, but that seems to be a stop-gap solution. While Thibodeau does not have the best track record of embracing any sort of youth movement, a case can be made that it is a necessary move for the current Knicks roster. While Knicks fans think that may just mean trusting Barrett and giving more opportunities to Obi Toppin and Immanuel Quickley, those are not the only possible options.

The Knicks drafted two guards in the first 36 picks in this past draft and it is time now to start giving them a chance. Thibs needs to be willing to give them an opportunity and see what they can do given a larger role. The guard rotation has dwindled down to four players in total: Alec Burks, Evan Fournier, Immanuel Quickley, and Derrick Rose. That roster does not have the depth, nor the talent to warrant this type of rotation.

Quentin Grimes is a sharp shooting two-way guard that is hitting a 38% clip from beyond the arc on a small sample size. The 6’4″ Houston alum was an older prospect in the draft and an NBA-ready one at that. He showed good production in Summer League and has a picture-perfect jump shot that looks as pretty as anything in the game.

Now, we do not know what Grimes’ performance looks like in practice and we need to trust that Thibs will do what is best for the team. However, it is hard to believe that Grimes has not earned an opportunity to play more than the 6.1 minutes per game that he is currently averaging. His defense alone makes him a worthwhile rotational guard and provides more contribution than some of his contemporaries.

Nobody expects the rookie guard to jump into the starting lineup, but he deserves a chance and could potentially contribute at a high level on both sides of the ball. Not only could you expect a contribution already from Grimes, but he would provide new energy to the team. Grimes appears to be young and hungry with something to prove, and that is an attitude the Knicks could certainly use.

The Knicks’ second-round pick was touted for his motor and his defense going into the draft and fell all the way to the 36th pick. Many scouts had him as a first-round grade because of a combination of his point-of-attack defense and shot creation. While some might have questioned how the shorter guard would translate into the league, others believed in his physicality and toughness to help compensate.

The West Virginia guard was heralded as one of the steals and best value picks on draft night. Unfortunately, we have not had a chance to see what he could look like on an NBA court. McBride has only suited up for seven games this season for the Knicks and is playing a whopping 1.7 minutes per game, mostly consisting of mop-up minutes.

While the pesky defensive-minded guard has had limited minutes on the Knicks proper, he has had a few games to prove himself in Westchester. In his time in the G League, he put up downright astounding numbers and again proved that he deserves a chance.

The 21-year-old guard came in with a reputation to be “NBA ready” largely because of his on-ball defense and the idea that he could contribute on day one on that side of the ball. However, in the G League, he proved once again that he can do it on both sides of the basket. His three-point shooting has been on full display in Westchester.

At least in Westchester, Deuce McBride has 25 points and 5 triples through 3 quarters

Similar to Grimes, Deuce should not be getting put in the starting lineup, but for a team without much depth, what downside is there to giving him an opportunity?

The time for change is now, and Thibodeau has said that more change is still to come. When looking at the realistic options that the Knicks have, this is something that solves multiple issues. Bringing in two defensive-minded plus shooters brings positives to the roster while increasing the depth and bench production.

Not only would the on-court production be a potential benefit, but the bi-product of this would be the message that it sends to the team and fan base at large. An old-school coach notorious for a tight lineup and an unwillingness to trust his young guys giving a couple of rookie guards a chance would show he is serious about figuring this out.

The energy has been off with this team and the effort level has not been what anyone hoped for coming off a successful playoff appearance last year. This is where you bring in the young guys with nothing to lose to give that effort and hopefully motivate the rest of the team.

Grimes and McBride still have a long way to go to prove they are consistent rotation players on a playoff team. However, the Knicks are floundering and the Kemba move shows that they are ready to make some changes. So what better time than now to give these guys a chance to earn their spot in the rotation?