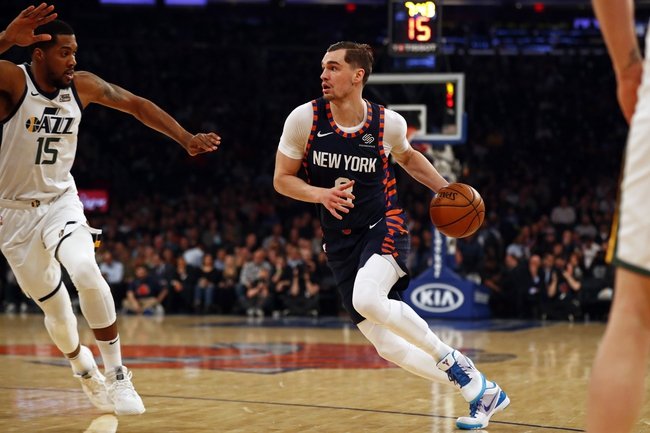 With only 10 players available, the Knicks were quickly dispatched by Rudy Gobert and the Utah Jazz, 137-116.

As the deficit ballooned to 33 points, color commentator and New York Knicks legend Walt “Clyde” Frazier summed it up perfectly: “This is becoming embarrassing now, folks.”

With Frank Ntilikina and Dennis Smith Jr. already out, the loss of guards Kadeem Allen, Allonzo Trier and forward Noah Vonleh before Wednesday’s tilt meant the Knicks had just 10 active players with one active lead guard in Emmanuel Mudiay.

For a Utah team looking to remain in the race for a top-four seed in the Western Conference playoff standings, it was a welcomed sight.

Being the only ball handler for the offense, Mudiay finished with 15 points and five assists on 7-of-17 shooting. He was able to break down Utah’s offense but found himself staring at Gobert at the rim, making shots at the rim a difficult chore to drop in.

The Jazz took advantage of New York’s 28th-ranked defense, shooting 56.5 percent from the field and knocking down 47.6 percent of their three-point attempts—several shots being wide open. The Jazz largely won this game early, pushing their lead to 27 points before the half.

In all, it was a game to forget for the upstart Knicks and another lesson to add in a season full of them.

The one bright side was the play of rookie Mitchell Robinson. Robinson had a tough assignment against Rudy Gobert and fared well in spurts. Overall, Robinson finished with 14 points, eight rebounds, and three blocks.

Mitch is the only bright spot in my life pic.twitter.com/jBmY7Lwgmj

With his three blocks, Robinson set a new record of 29 straight games with a block, breaking Knicks legend Patrick Ewing’s record of 28. He also finished the game with 136 blocks total for the season, setting a new Knicks rookie record. The previous record holder was Kristaps Porzingis with 134 blocks.

The Knicks should avoid trading Frank Ntilikina, something the front office is interested in doing. Even in spurts, Frank has the tools and intelligence to be a good team defender. The Knicks lack solid perimeter defenders and it was on display tonight as Utah found several good looks from beyond the arc.

Huge shout for Kevin Knox. Everyone was poor on defense tonight, but Knox played well on offense—getting to his spots and being active off the ball. Six free-throw attempts and eights rebounds are a good indicator of Knox remaining active, a knock on the 19-year-old rookie who can display passivity and fade out of games. It’s the little things that are positive for Knox as we near the end of the season.

The Knicks remain home to host Nikola Jokic and the Denver Nuggets (47-22) on Friday.