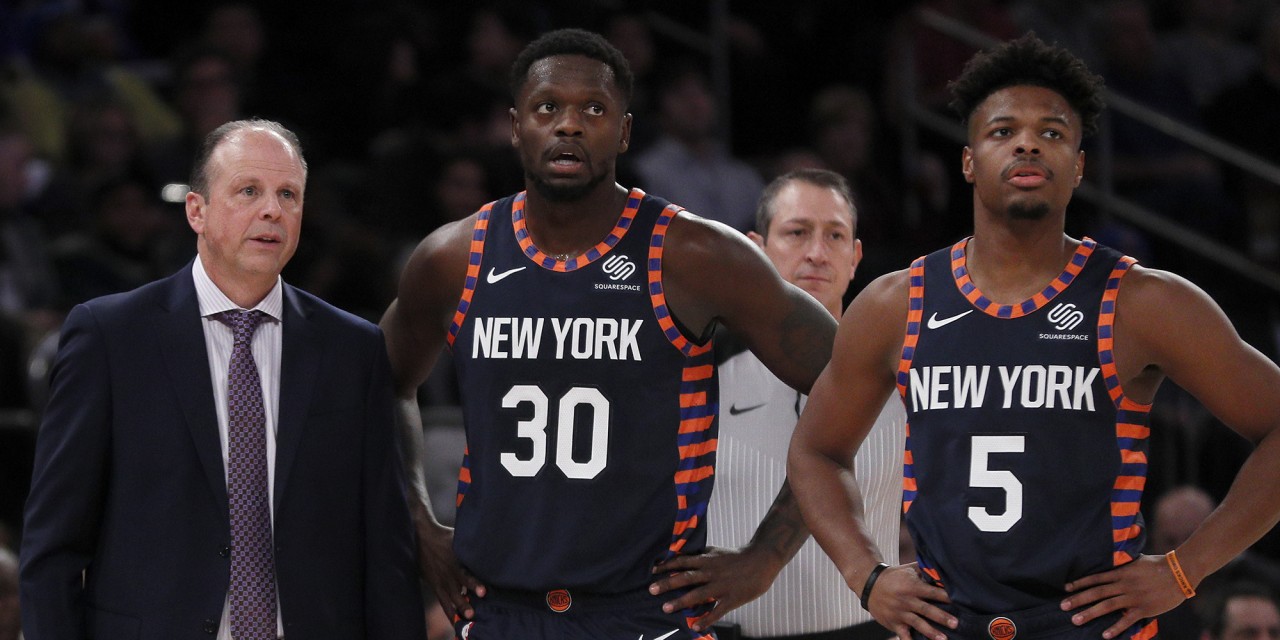 With Elfrid Payton suspended and Frank Ntilikina hurt, the Knicks’ point guard depth is seriously damaged as they face off with the Pacers.

The New York Knicks (13-36) will get their second of three matchups with the Indiana Pacers (31-17) Saturday night. Tip-off at Bankers Life Fieldhouse is scheduled for 7:00 p.m. ET. New York will look to avoid three straight losses following an ugly Wednesday evening at Madison Square Garden.

Indiana recently welcomed two-time All-Star Victor Oladipo back into its lineup. The 27-year-old guard averaged 21.6 points, 5.3 rebounds, 4.6 assists, and 2.1 steals per game over his last two seasons, his first two with the Pacers. He was named the 2017–18 Most Improved Player in addition to being an All-Defensive First Team member that season.

Oladipo suffered a ruptured quad tendon last January and had been sidelined since then. He made his season debut Wednesday night, recording nine points, four assists, and two rebounds on 2-for-8 shooting in 20 minutes of play off the bench.

This season, the Pacers have been led by big man Domantas Sabonis. The 23-year-old was named a first-time All-Star on Thursday, averaging 18.0 points, 12.6 rebounds (which ranks sixth in the NBA), and 4.6 assists per game.

Malcolm Brogdon is a key player in Indiana’s success, too. The 27-year-old guard is averaging 17.0 points and 7.4 assists per game. Forward T.J. Warren is Indiana’s leading scorer, averaging 18.4 points per game on 51.7% field goal shooting and 38.1% from three.

Indiana’s defense, anchored by shot-blocking extraordinaire Myles Turner, is their strength. They have the 10th lowest Defensive Rating in the league. Bringing back Oladipo, who led the league in steals in the 2017–18 season, should strengthen their defense further.

The Pacers offense is one of the most efficient in the league. Although they only score 110.1 points per game (good for 18th in the NBA), they rank third in field goal percentage, three-point percentage, and assists per game.

Elfrid Payton and Marcus Morris were reprimanded by the league for their roles in the fight at the end of Wednesday’s game, with Payton serving a one-game suspension.

The Knicks announced Saturday morning that Frank Ntilikina will be out with a groin injury. Ntilikina said his groin “acted up” prior to tip-off of Wednesday’s game, which he got a DNP in. Reggie Bullock is listed as questionable with an illness.

Injury Update for 2/1 at Indiana: Reggie Bullock (illness) is questionable and Frank Ntilikina (sore groin) is out.

R.J. Barrett was named to the NBA’s Rising Stars Challenge during All-Star Weekend. The Toronto, Canada, native will be a member of Team World, but his availability for the game is currently unknown, as he has missed over two weeks of action with a right ankle sprain.

Mike Miller said Barrett is “on track” to play in the game, per Stefan Bondy of the New York Daily News. Barrett will extend the Knicks’ streak of having a player in the rising stars game to three years, with Kevin Knox playing in last year’s game and Frank Ntilikina playing the year before that.

Mike Miller said that RJ Barrett, who is sidelined with a sprained ankle, is on track to play in the Rising Stars Challenge. Said “it looks promising.”

SNY’s Ian Begley reported that Marcus Morris and the Knicks have a “strong mutual interest in reaching an agreement in free agency this summer.” Morris has drawn interest from the Los Angeles Clippers and Philadelphia 76ers.

The 30-year-old Morris is having a career-year so far this season, his first as a Knick. Despite Morris being on an expiring contract and the Knicks owning the third-worst record in the league, the team is hesitant to move him.