Should the Knicks Bring Carmelo Anthony Back? — A Debate 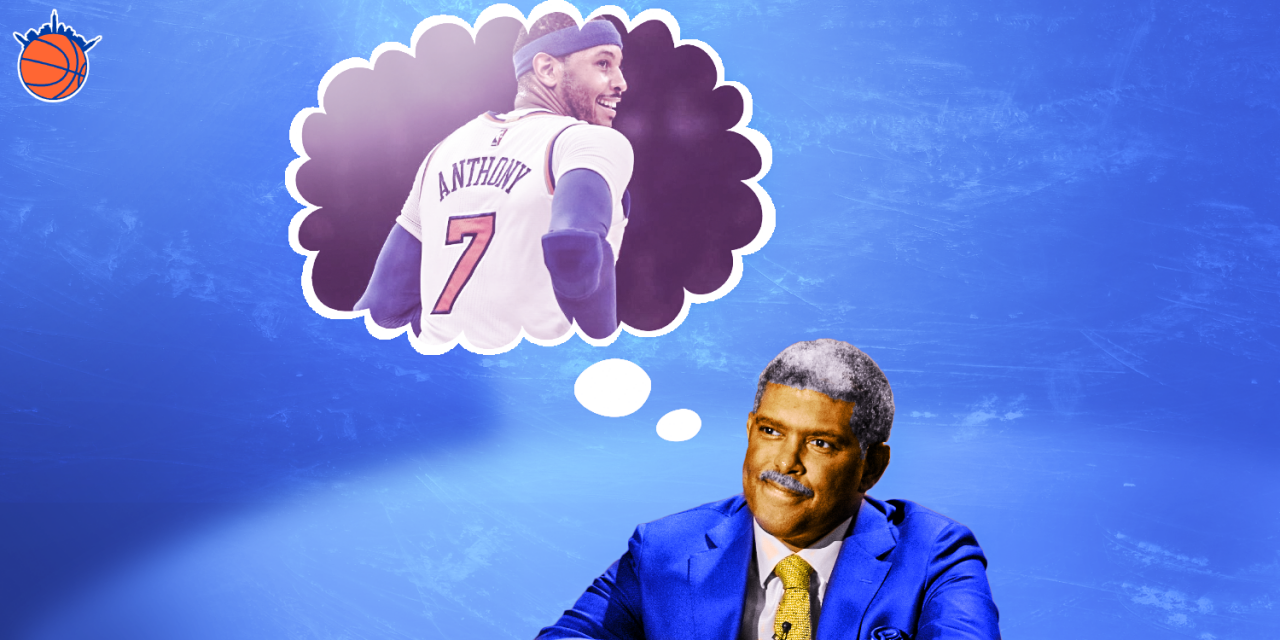 Carmelo Anthony is a free agent following a short stint with the Houston Rockets. What could the veteran provide for the Knicks, and should they consider bringing him in?

Ty Jordan: Carmelo Anthony has an extensive list of accomplishments, but right now it’s not necessary to name them all. What we do know is that he’s one of the greatest scorers to ever set foot in the NBA. That pedigree, although it may not be “winning,” is important. I think it’s time for him to enter into the twilight of his career as LeBron James has. He’s always been compared to James—and come short, but this next phase, as a teacher/mentor could be where he gets an edge.

The Knicks are chock full of raw, talented guys who could learn a thing or two from Old Man ‘Melo. Kevin Knox was drafted to essentially fill the void he left, a strong rebounding stretch forward who can get buckets from every level. That was ‘Melo from the jump through his last year in New York. Frank Ntilikina could learn a little something from Anthony’s post game, too. Knox and Ntilikina are largely blank slates, and having someone like that working with them every day could help mold them into their best selves. I’m not saying anyone should expect him to contribute as a defensive anchor, but the kids would have to pick up something in osmosis. Plus, learning from Knicks legends is a thing Fizdale has already implemented this season!

Knicks haven’t had a legendary player in their ranks in a long time. There’s something about a franchise, especially one that’s as storied (and is supposedly NBA royalty) as the New York Knicks. Right now, I think the franchise could actually get themselves a win by doing what they’ve always done: signing an over-the-hump star. ‘Melo just signed a minimum deal with a supposed-contender and then got dropped. Why wouldn’t he sign a somewhat secure deal back at home base where the fans know and love him? It would be similar to Kevin Garnett’s return to the Minnesota Timberwolves, except they’d probably expect ‘Melo to take to the court nearly every game, giving them some vintage mid-range buckets while the young guys rest. It could be that “going into the sunset” moment for Carmelo.

Picture it: he averages around 10 minutes a game, slowly but surely still climbing up the all-time scoring list. Knox, Ntilikina, and Allonzo Trier develop into top-40 NBA players. And, as the team starts to get good, he retires, leaving space for growth. Then, after years of service and two stints with the Knicks, his jersey is retired. And he’s happy. Without a ring, but truly at peace with his Hall of Fame–worthy NBA career. Because the success he wanted was right under his nose the whole time all along. (Get it? Because his jersey is under his nose. And his jersey gets retired.)

Along with Fizdale’s “learning from the legend” exercise, it was mentioned this past summer that the Knicks wanted to add another veteran to the roster. Well, Carmelo is a fifteen-year veteran.

That’s a whole lot of veteran, but the Knicks don’t have too many options with players that they know well. Courtney Lee hasn’t played a game and Lance Thomas is sidelined with an injury of his own. The closest thing to a veteran on the court is Tim Hardaway Jr. I don’t expect him to be anything close to what he was when he left the Knicks—players don’t age like wine, but I noticed that in the close games the Knicks have had, they’ve lacked firepower. Trier can only be depended on for so much, and although he’s past-his-prime, ‘Melo hitting a wide-open jumper isn’t out of the question. At the very least it’ll help teach Trier about passing out of a double team. No one else seems to care to get open.

Between Houston and OKC, ‘Melo averaged 15.8 points per game over 88 hectic, inconsistent games. He was playing 30 minutes a game. A much smaller workload where he’s pushing maybe 10 minutes at the 4 isn’t a terrible idea. The Knicks would most likely get more efficient numbers, since his role would be diminished. Thomas won’t be back for a while, and Knox isn’t quite ready for the full-time job, but that’s conversation for another time. For right now, tell me which sounds better: Allowing Vonleh to try spurts experimenting as a small-ball center while Kanter rests and Robinson stops raking in fouls, or playing Mario Hezonja? Yeah, that’s what I thought.

Kevin Gamgort: The thought of the Knicks even entertaining the idea of signing Carmelo Anthony is ridiculous. It’s simple—bringing Anthony back would be a step in the wrong direction for a team looking to build towards the future. The trading of Anthony in 2017 marked the end of an era and the beginning of a new one.

At age 34, Carmelo Anthony is a shell of his former self. With that, I still believe Anthony can serve a solid role off the bench for an NBA team—but not the Knicks. At 8-16, the Knicks are in the midst of a rebuilding year. Therefore, it’s vital that they give their young talent as much play time and experience on the court as possible. Whether he served a role off the bench or even started for the Knicks, Anthony would take away vital minutes from the Knicks neophytes in a rebuilding season.

With his tumultuous career in New York coming to an end, Anthony returning and taking away minutes from younger players would make Knicks fans more upset than happy about his return. With the coaching staff already struggling in terms of figuring out rotations and getting good minutes for their young core, Anthony would just bring more issues to the situation.

After being traded to OKC and then signing with Houston, it’s clear that Anthony was looking to play for a contender towards the end of his career. Thus, it’s hard to believe that Anthony would want to play for a rebuilding team rather than get another shot at a championship. It’s not as if the Knicks would even give him a larger contract than any other team, so why wouldn’t Anthony wait and sign with a team that gives him the best chance to win rather than return to New York?

I know that legacy is often brought up in his debate to return, but what will his return in a rebuilding season do to improve his legacy any more than he already has? It was clear that the Knicks and Anthony were long overdue for a breakup, and it’s hard to even fathom the thought of bringing him back given the way in which things ended. This alongside the team looking to get younger makes the signing of Anthony ludicrous.

Let’s not forget the impact this potential signing would have on the media.

For the first time in a long time, the Knicks are doing things the right way. They are getting young and developing talent through the draft. Bringing in Anthony would completely go against this plan and their goals.

‘Melo had some magical moments in New York, and will forever be remembered as one of the best scorers to don the orange and blue. However, his time with the Knicks ended in 2017, and the thought of bringing him back needs to be put to rest. Case closed.