Should the Knicks Make Malik Beasley an Offer? 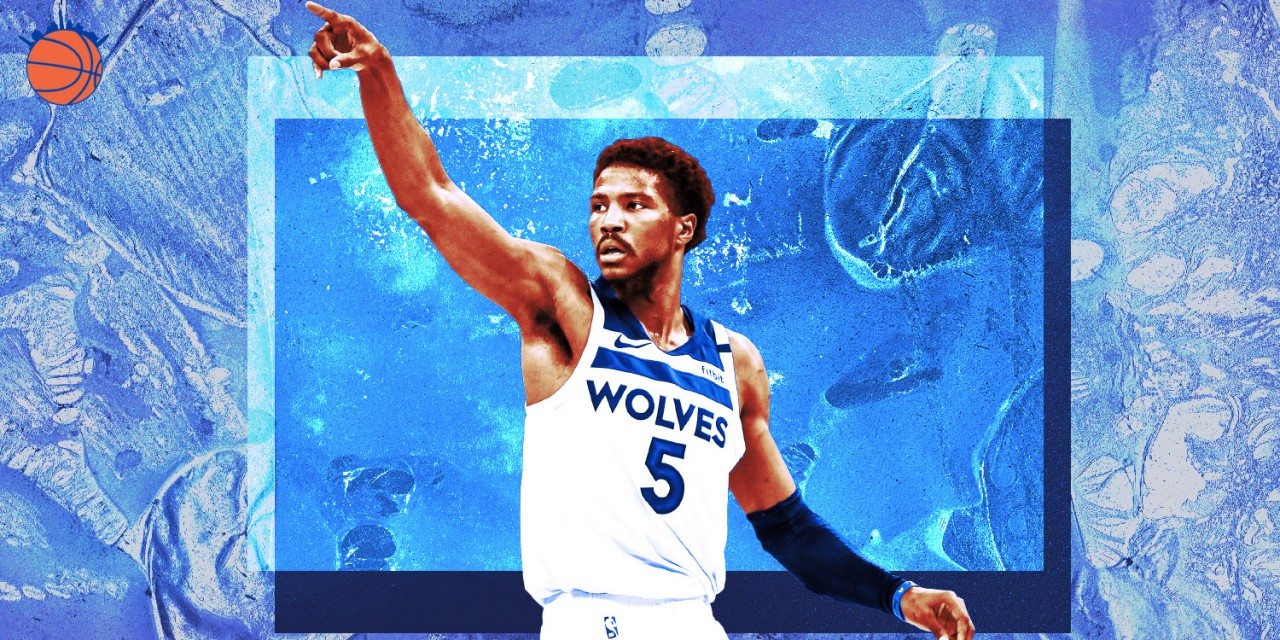 Malik Beasley made himself a lot of money in 14 regular-season games.

After three-plus years as a role player for the Denver Nuggets, Beasley was dealt to the Minnesota Timberwolves on February 5th in the 12-player trade that sent Robert Covington to the Houston Rockets. The no. 19 overall pick in 2016—a 6’4″ shooting guard—was redundant behind Jamal Murray and Gary Harris, and averaged just 7.4 points in 16.4 minutes per game in his Mile High tenure. Despite a limited role, Beasley did flash the potent scoring prowess that moved him up draft boards after one season at Florida State. As Forbes noted, his 11.3 points on a 59.9 TS% in his semi-breakout 2018–19 was “outright elite” for a perimeter-oriented player.

He instantly looked like an All-Star upon arrival in Minnesota. Beasley has always been more effective when given substantial minutes, and in 33.1 minutes a game in 14 Wolves contests pre-hiatus, his scoring rocketed to 20.7 points per game on a sizzling 57.7 eFG%. He shot 8.4 threes per game (compared to 3.3 in his Denver career) and drained 42.6%—Steph Curry numbers.

Malik Beasley hit SIX threes in the first half against the Clippers 🌧 pic.twitter.com/fdgiH1QY5O

He shot 40.5% on catch-and-shoot triples in 2019–20 and 35.5% on pull-up threes. After the trade, he nailed nearly 50% of pull-up looks as his role increased with Karl-Anthony Towns out of the lineup. 37.7% of his three-pointers came after zero dribbles, though he can whip out a few go-to dribble combos to set up a jumper.

Beasley shot more threes in Minnesota, but he also showed off his full offensive arsenal during his extended heat-check. He attempted more shots within 10 feet after the trade than he did before, and generally attacked the rim and filled the lanes in transition with vigor.

Simply put: Beasley is a natural bucket-getter; a prototypical shooting guard. He’s a nifty and active slasher—with or without the rock. He seems to enjoys knifing into the lane, even if his so-so handle can result in trickier-than-expected shots (which he still finishes well). His uptick in three-point shooting volume only rendered his slashing game even more dangerous.

Perhaps Beasley was motivated by his impending free agency or energized by the change of scenery, but his competitiveness and high-activity level are glaringly obvious in his Minnesota clips. Those characteristics help compensate for his unpolished defensive skills (and 6’7″ wingspan).

Whether his passing and handle is advanced enough to operate as a pick-and-roll playmaker remains a question. But, he was the league’s second-most effective pick-and-roll ball-handler after the trade in limited opportunities.

Regardless, as an Energizer Bunny who can catch-and-shoot, space and cut, and occasionally create his own bucket, he offers intriguing potential as a third banana. In 2018–19, Beasley/Murray/Nikola Jokic was Denver’s second-most utilized three-man combination, and produced +9.1 points per 100 possessions. Beasley only suited up twice with Towns and once with both Towns and Russell—in Beasley’s first two games with Minnesota—but the Wolves offense was prolific in those contests, accumulating 268 points.

Beasley lacks versatility on defense, but his offensive progression—particularly a commitment to freely fire from deep—indicates a willingness to adjust his game. “I watched a lot of film and a lot of guys I’ve been playing against and studying their personnel,” Beasley told The Denver Post in 2019 about improving his defense. “And watching guys who are really good at defending like Avery Bradley, Tony Allen back in his prime, Andre Iguodala and even Gary Harris. Seeing how they defend and then working on strength; laterally and stuff like that.”

On that note, Beasley’s work ethic has been lauded for years. He was not heavily recruited out of high school, but became one of the ACC’s top freshman in 2016–17, averaging 15.6 points for the Seminoles, shooting 47.1% from the field, 38.7% from deep, and 81.3% from the free throw line. “From a character standpoint, he’s off the Richter scale,” Florida State head coach Leonard Hamilton said. “He’s one of those kids who is unbelievably hardworking, extremely passionate, a gym rat. Tremendous effort is not work to him, it’s just kind of like who he is and what he enjoys doing.”

“He may be the hardest worker I’ve had in 30 years,” Beasley’s high school coach Drew Catlett recounted to the Orlando Sentinel.

Beasley—who earned about $2.73 million in 2019–20 on the final year of his rookie-scale deal—should profit handsomely from his hot hand in the Minnesota winter. He will be a restricted free agent whenever the offseason begins, so Minnesota can match any offer that comes his way. (The Timberwolves also own his Bird Rights, enabling them to exceed the cap to retain him.)

Before we get to his feasibility for the New York Knicks, we should emphasize: the safe money is on the Timberwolves committing to the emerging sharpshooter—even with the elevated price tag. Minnesota sent Houston’s 2020 first-round pick for his services, and his outstanding late-season play further validated the acquisition. (He could sign a qualifying offer and become an unrestricted free agent in 2021, but this route is unpopular. See: Noel, Nerlens.)

Plus, Beasley sounded like a man who was invested in a future in the Twin Cities. “Give the Timberwolves time, and we will be the best team in the West,” he said in March.

Having said that: Should the Knicks make a play for Beasley?

First off, Beasley is represented by Rich Paul and Klutch Sports (notably not CAA), who will drive a hard bargain. Beasley prudently passed on a three-year, $30 million offer from Denver in 2019 before changing agencies, and is now in line to earn a contract in the four-year, $16-18 million average annual value range. Considering his restricted status, a team might have to surpass those numbers to put the Wolves in a tough position.

Here’s where the Knicks come in. They can’t control what Minnesota does, and teams typically hesitate to make lucrative offers to RFAs because it ties up cap space and demands an offer above market value. In this upcoming offseason, teams could be especially apprehensive because of revenue uncertainty—even with expected cap smoothing.

However, the Knicks will be one of the few teams with significant cap space (possibly $45 million), and one of the many that could use a promising young wing who will score off-the-ball and work his tail off.

The Knicks were 29th in three-point percentage and 30th in three-point rate in 2019–20. They lacked off-ball movers and spot-up shooting, and finished 27th in assists per game. Reggie Bullock made 33% of his threes and is destined for bench duty. Damyean Dotson hasn’t developed into a rotation piece, and Wayne Ellington isn’t the answer. Frank Ntilikina may lock down opposing guards, but, sadly, he will never develop an offensive repertoire on Beasley’s level. And, historically, Tom Thibodeau squads don’t light it up from deep, so a microwavable spark plug like Beasley would provide a major boost.

More specifically, the prospect of Beasley playing off R.J. Barrett and Mitchell Robinson is an enticing daydream. His competitiveness would ingratiate him to the fans, his teammates, and Thibodeau. While he may not quite replicate his production from this past February and March, the 23-year-old will make the effort to round out his game, and he confidently excelled in his first (albeit limited) chance to be a top offensive option in the NBA.

Realistically, the Knicks may have to offer something in the range of four years, $70 million to make Minnesota sweat. Rose might reasonably determine that targeting unrestricted wings like Joe Harris, Christian Wood or Davis Bertans, or spending bigger on a point guard like Fred VanVleet is a smarter use of funds. Or, he could look to the draft to fill the void.

On the other hand, in a thin market, paying a little extra for Beasley could be the Knicks’ best route to land a long-term third option. Plus, it’s possible the Timberwolves are slightly less interested in paying Beasley big bucks after winning the lottery in August.

Beyond money and sample size, it’s hard to argue against Beasley as a basketball and cultural fit in New York, and he may be unattainable, anyway. But, if Rose is looking to make an immediate imprint on the roster in his first offseason, there are worse people to bet on.

»READ: Why the Knicks should bring back Damyean Dotson