Should the Knicks Move Up in the 2022 NBA Draft? 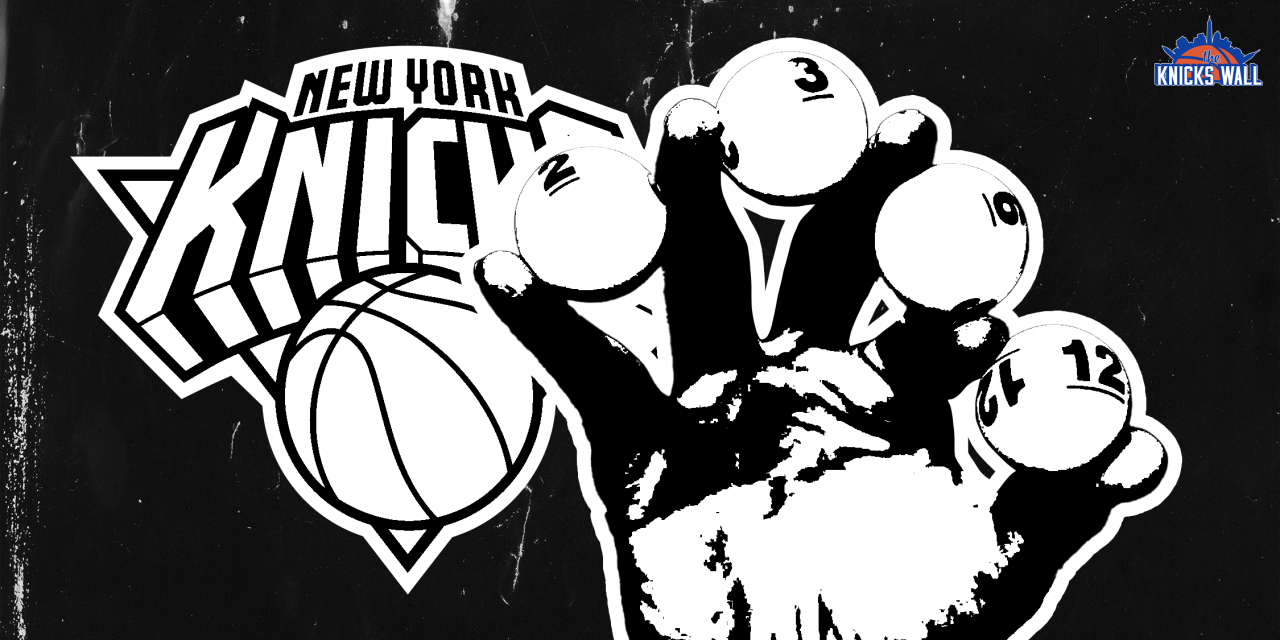 The options are truly limitless for the Knicks this offseason, with the 2022 NBA Draft presenting the chance to trade up to find a prized prospect.

With the 11th-best draft odds, the New York Knicks sit in a unique position entering the 2022 NBA Draft. While New York continues to gather assets for their next move, they continue to add talent to the roster, hoping to stay afloat. The rare “middle” of the pack suggests the Knicks can go just about anywhere in this draft, but they could also use an elite talent while also already having several young pieces on the roster from the last three years.

It makes for an offseason where just about anything is possible, from a theoretical Donovan Mitchell trade conversation to a consolidation trade, just to solidify a young core moving forward.

Just a brief glimpse at New York’s young talent here; Mitchell Robinson is a pending unrestricted free agent, looking to cash in, while Jericho Sims, a potential Robinson replacement, was on a two-way deal last season and should get a new, guaranteed contract for next season. From there, you have RJ Barrett, Cam Reddish, Obi Toppin, Immanuel Quickley, Miles “Deuce” McBride, and Quentin Grimes, all of which are on their current rookie contracts.

As a result, New York can go nowhere and everywhere all at once. Outside of a lead guard, New York has several paths to follow. There a two-way wing players available to add to the Barrett, Grimes, and Reddish group, a bouncy forward who can be added alongside Toppin or, if they want, a center prospect option to battle it out with Sims. The Knicks could go several different directions with this pick.

One option that intrigues me for New York is moving up in the draft. Using some of their assets to take a swing at a higher group of talent in the 2022 draft class.

More about talent, less about the need

After that? New York remains wide open with adding players to the roster, as they continue to find another piece to solidify their young group of players. There isn’t a player the Knicks shouldn’t consider at this stage in the draft and this stage in their roster remodeling. For example, if Kansas guard Ochai Agbaji is the best player on the board, the Knicks should not pass up on him because they have Quentin Grimes. Or, if Iowa forward Keegan Murray were to fall, I wouldn’t be against taking him despite Obi Toppin’s presence as the power forward of the future.

One player who fills that spot at the end of the lottery is Baylor forward Jeremy Sochan. On the surface, Sochan is a weird add because of Julius Randle, Obi Toppin, and Cam Reddish on the roster—all three could see minutes at power forward this upcoming season. Throw in Barrett, who should seize most of the minutes at small forward, and you start to ask where are Sochan’s minutes if he were drafted by the Knicks.

Sochan has woes, as his shooting numbers (29.6% from three, 58.9% from the free-throw line in his lone season at Baylor) and overall offensive skill set dampers the entire profile for some. After seeing the likes of Frank Ntilikina and Kevin Knox’s subpar shooting seasons in a Knicks uniform, another non-shooter just might break the fanbase, especially one in the lottery.

However, Sochan does make sense for a team that could use more versatility amongst their lineups and finished last in several major assist categories last season. At Baylor, Sochan was an excellent defender, averaging 2.8 stocks (1.0 blocks, 1.8 steals) and finishing with an 89.8 Defensive Rating. His underrating skill is his passing ability, finishing with 2.58 assists per 36 minutes, Sochan was malleable in Baylor’s offense, serving as a secondary creator and overall ball-mover.

At this stage in their roster remodel, New York should be more interested in adding talent than adding for fit. Guys like Sochan, G League guard Dyson Daniels (6-foot-8 combo guard who seems like a high-level role player on a good team), and Murray (blistering scoring forward) are all guys who might be bench pieces for the Knicks, but all have traits that could help the Knicks in the long-run as they figure out their direction. Taking someone like Kentucky’s TyTy Washington over them because he “fills a need” would be a big mistake by the front office.

Should the Knicks use Julius Randle in a trade to move up?

Where do we stand with Julius Randle? His 2020–21 season was one for the ages—Most Improved Player of the Year, All-Star bid, the second player to average 20 points, eight rebounds and shoot 40% from the outside (the first being Larry Bird)—Randle signed a four-year, max extension and many thought Randle would be a cornerstone of the franchise.

Fast forward 12 months, Randle is coming off a poor season, clashed with New York’s now future-forward direction, alienated Knicks fans with his brash and erratic behavior and more importantly, New York has Obi Toppin in tow, ready to take another step forward. With that, could the front office use him as a chip to not only move up in the draft? If so, where could they go?

There aren’t many options that make sense. Indiana at no. 5 just traded Domantas Sabonis and could further tear it down with Malcolm Brogdon available this summer. Sacramento just acquired Sabonis from Indiana, making that a tough fit. Moving up with teams like New Orleans or San Antonio and giving up Randle for a few spots doesn’t make much sense for the Knicks. The only team that makes sense is the Portland Trail Blazers.

With the New Orleans Pelicans making the playoffs, the biggest loser was Portland. As a result of New Orleans “winning” the play-in, they punted their first-round pick, which would’ve been in the lottery, to Charlotte instead. Now, the Blazers, who needed that pick to trade for a player to help the Damian Lillard era, are stuck with more questions than answers. Could the addition of Randle, while flipping picks help Portland in their last gasp of salvaging the Lillard era?

Considering the highs we’ve seen from Randle, moving him and the 11th pick to Portland for the sixth pick would be a few things. Eric Bledsoe—and his salary of $19.3 million—would have to be in the trade, but mostly as trade filler. The Blazers get the chance to rehab Randle back into the solid player he was before, plus still allows them to operate in the lottery as well. Re-signing Anfernee Simons, bringing in Randle and a lottery talent, and a healthy Lillard allows them to approach the offseason with the intent to try to contend for a play-in spot.

Meanwhile, New York clears future payroll and jumps five spots and into a different stratosphere of draft prospects, while also jumping headfirst into working around the youngsters on the roster. Bledsoe would either be traded or a short-term starter under Tom Thibodeau, but it opens up minutes for Obi Toppin and Cam Reddish at power forward, which would be the biggest gain from the trade. I think the Knicks hesitate on that trade, but it would be intriguing for both sides.

The front office has backed Randle, and brought him along to their field trip to the Mavericks-Jazz playoff games a couple of weeks ago, but if they don’t think they can land Brunson or Mitchell, a full push towards playing the young guys could be a direction to look into.

Who should New York move up for in the 2022 NBA Draft?

The ultimate question: who should the Knicks trade up for? In a world where the Knicks cannot trade up into the top four, Purdue guard Jaden Ivey, who fits New York’s need for both a point guard and a true slasher and kick backcourt player, is off the table. Even if the Knicks failed to land Ivey, there are a few names the Knicks should be intrigued by in a potential move up.

It starts with Duke forward AJ Griffin. The freshman averaged 10.4 points, 3.9 rebounds, and 1.0 assists. Along with those averages, Griffin shot 54% from two and 44% from three. What makes Griffin enticing for the Knicks is his ability to create offense for himself. Even though the rest of Griffin’s skill set leaves a lot to be desired, a wing player who can impose his way and generate offense is always welcomed and Griffin could form a 1-2 punch with RJ Barrett.

Drafting a center in the lottery is a bit of a concern, but Memphis center Jalen Duren is a special athlete. At 6-foot-11 with a 7-foot-4 wingspan, Duren has the size and athleticism of an elite shot blocker and that projects him as a positive defender (4.2 stocks per 36). What makes him different is his passing ability. Averaging 1.8 assists per 36, Duren made several impressive passes and finds that could intrigue teams as a short roll passer.

If Duren can offer great defense and isn’t a complete dud with the ball in his hands on offense, he’s a great pick in the top 10 and could help someone for years the come. Also, he’s one of the youngest players in the league, so the sky is the limit for him.

Finally, the Knicks should be intrigued by the mystery box in this class that title belongs to Shaedon Sharpe. Another young player, Sharpe has been viewed as a top-five prospect for 2023 before entering the 2022 draft. The starter kit—mid-range game, impressive slashing, elite athleticism—could be quite the get for someone who wants to dream of a potential elite wing player.

For New York, the selection of Sharpe would allow New York to get an elite wing prospect and figure out the rest of the roster before breaking him out. The Knicks would still have Grimes, Reddish, Barrett, and Evan Fournier to work with before breaking Sharpe in. Then, as New York makes moves in the future, whether it be a sign-and-trade or blockbuster deal, Sharpe could either be a piece in the trade or a leftover with upside to develop and remodel with.

Ultimately, Sharpe seems like a long shot, but he would represent an opportunity for New York to acquire an elite talent and allow them to move forward with that in mind.

The New York Knicks are in a solid spot at the moment, even after falling off from the highs of the 2020–21 season, but this offseason gives them a chance to get back on track. The draft offers New York another chance to add cheap talent to a roster that could change within the next 12-24 months with a big move in either direction.

New York can go several directions, whether it be moving Randle to move up or sticking and picking, the Knicks have a few good options and could come away from this draft with a talented player. However, the chance to move up and add a premier talent, someone who can join the Barrett-Quickley-Toppin trio to build around for the foreseeable future.