Should the Knicks Pursue Dennis Schröder This Offseason? 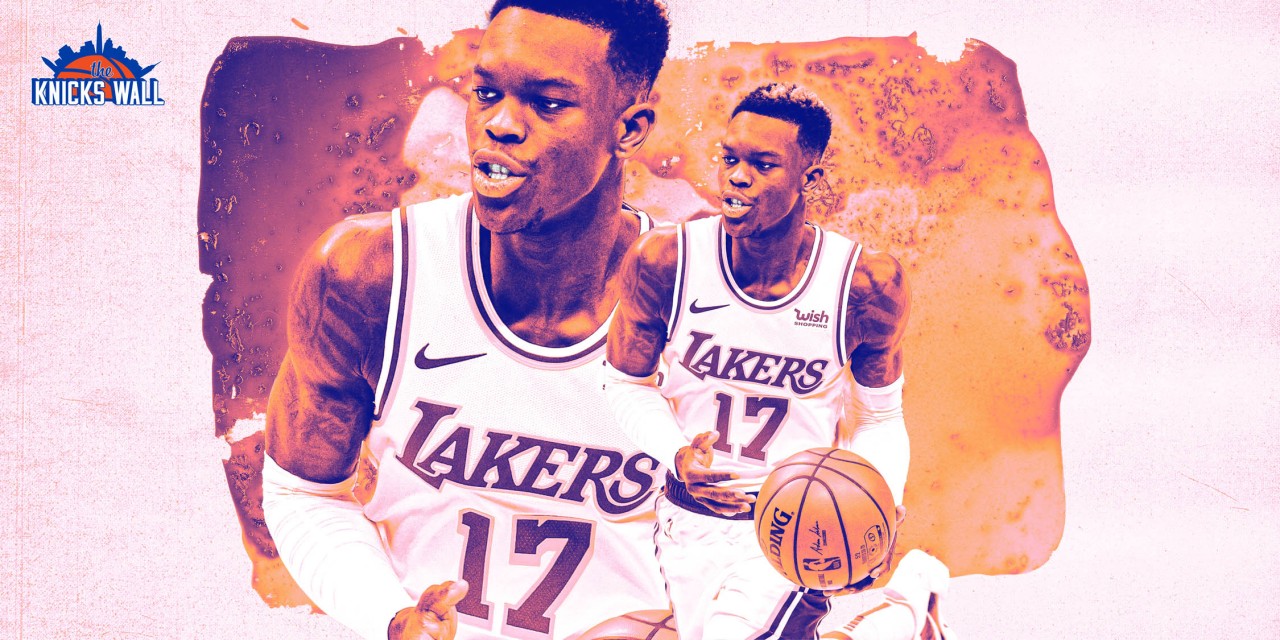 Los Angeles Lakers point guard Dennis Schröder will hit the open markets this summer. The 27-year-old would fit like a glove with the New York Knicks because of his fiery defense and playmaking abilities.

Ahead of the New York Knicks’ 111-96 win over the Los Angeles Lakers last Monday, SNY’s Ian Begley reported that point guard Dennis Schröder is “among the players on New York’s radar as the club looks ahead to free agency.”

If Schröder intended to use his lone appearance at Madison Square Garden in 2020–21 as an audition for what could be a lucrative role with the Knicks, he made a compelling case for the part. The Lakers—in a subpar offensive performance, even without LeBron James and Anthony Davis—were powered by their Energizer Bunny guard, who led the team with 21 points and six assists. That performance occurred just two nights after going toe-to-toe with Kyrie Irving for a half in with Schröder joined him for an early stroll to the locker room.

On Saturday against the Utah Jazz, Schröder turned in arguably his best performance of the season. The 6-foot-3 product of Germany scored the Lakers’ final six points in regulation—including a layup with 3.5 seconds to go to force overtime—to go along with 25 points, eight assists, and two blocks(!), as L.A. pulled out the win.

Aside from below-average three-point shooting this year—33.7%, though he shot 38.5% from deep in the 2019–20 campaign—and a few too many turnovers, Schröder has been basically everything the Lakers could have asked for since they acquired him from the Oklahoma City Thunder in November.

In his ninth season, the 27-year-old has been good-to-very-good on both ends, averaging 15.4 points, 5.5 assists, and a career-high 1.2 steals per game, shooting 43.2% from the field and 84.6% from the free throw line. Those numbers won’t blow anyone away, and his advanced stats are mildly unfavorable. However, his true value is best measured with other metrics, including heart and grit. His tenacity has served as a vital sparkplug for L.A., while his quickness and dribble drives are an essential component to the Lakers system.

“I love Dennis Schröder,” Vogel said last week. “I think that’s the first thing you have to state. His competitive spirit, his fight, his swag, I think that wins for you.”

Dennis the Menace, at it again, gimpy ankle be damnedpic.twitter.com/yi4MRcx82k

The Lakers’ unsuccessful extension negotiations with Schröder have loomed under the surface. The Lakers would love to keep Schröder, and they’ve offered him the maximum extension they can make until summer: four-year, $84ish million. The guard rejected the offer, banking that he can earn upwards of $100 million, possibly $23-25 annually, in unrestricted free agency following a strong playoff run.

On multiple occasions, Schröder has expressed a preference to remain with the Lakers and a steadfast desire to test the market for the first time in his career. The two sides remain far apart on his value.

Dennis Schröder re-stated his desire to stay with the Lakers but also his intention to test unrestricted free agency for the 1st time in his 8-year career.

“I wanna play my season out…I want to be a Laker, but I want to see my options.”

The Lakers own his Bird Rights and can exceed the cap to eclipse any offer for Schröder. But, they’re facing a slew of key re-signings that could inflate their luxury tax bill to historic levels. Jeanie Buss is willing to spend, but there’s an internal limit somewhere.

Across the country, New York is sitting on a borough of cap space (roughly $50 million). Elfrid Payton, Derrick Rose, and Frank Ntilikina are impending free agents. Leon Rose will be targeting a young-ish point guard, and Schröder fits the mold as a third banana to R.J. Barrett and Julius Randle and a pick-and-roll partner for Mitchell Robinson.

Dennis Schroder, playing with a foot infection, hits Andre Drummond, playing on a toe injury, for an OT alley-oop, followed by an emphatic air-kick from Dennis pic.twitter.com/kiW8cX0x0v

On Friday, Begley opined that the Knicks would not “want to get into a bidding war for Schröder” but he “is certainly somebody that the Knicks are giving internal consideration to.”

“Schröder is a guard that some [in the Knicks’ front office] like, and Lonzo Ball has some support within the organization, but I don’t think it’s uniform support on Lonzo, or probably Dennis either,” Begley notes.

The Lakers won’t want to get into a bidding war, either. (Bleacher Report ranked the Lakers 26th in spending flexibility, and the Knicks second.) If the Knicks brass decides to prioritize Schröder over the 23-year-old Ball—who is reportedly seeking $20 million annually, too—they could probably nab him for $24 million or so. If the Knicks are willing to part with some draft capital, the Lakers could try to orchestrate a sign-and-trade.

Ball is a better three-point shooter (37.3% on 8.0 attempts this season) and distributor, but Schröder possesses a far superior ability to break down the defense and attack the rim. They’re studs on defense, albeit with different styles. The Lakers have been an elite pick-and-roll team this season, and Schröder deserves some credit for that.

83 NBA players have had 20+ rolls (actual rolls, not pops/slips) this season.

Schröder and Immanuel Quickley would easily become the feistiest defensive backcourt in the league. Schröder could ease the drive-and-kick and ball-handling burden from Barrett and Randle.

Above all else: Schröder is a consummate Thibs Guy. He’s as scrappy as they come, and he plays with his uniform dirty and a chip on his shoulder. If Thibodeau told Dennis he wanted him to play over 40 minutes for 82 games, I’m fairly confident Schröder would embrace the challenge without a complaint.

In terms of culture and character, Schröder is an ideal fit—for the coach, the city, and the franchise’s newfound identity. If it requires an overpay? So what. Now’s the time to spend—coming off a surprise playoff berth with two emerging stars—and the time to win.

As long as Elfrid Payton isn’t starting next season’s opener.