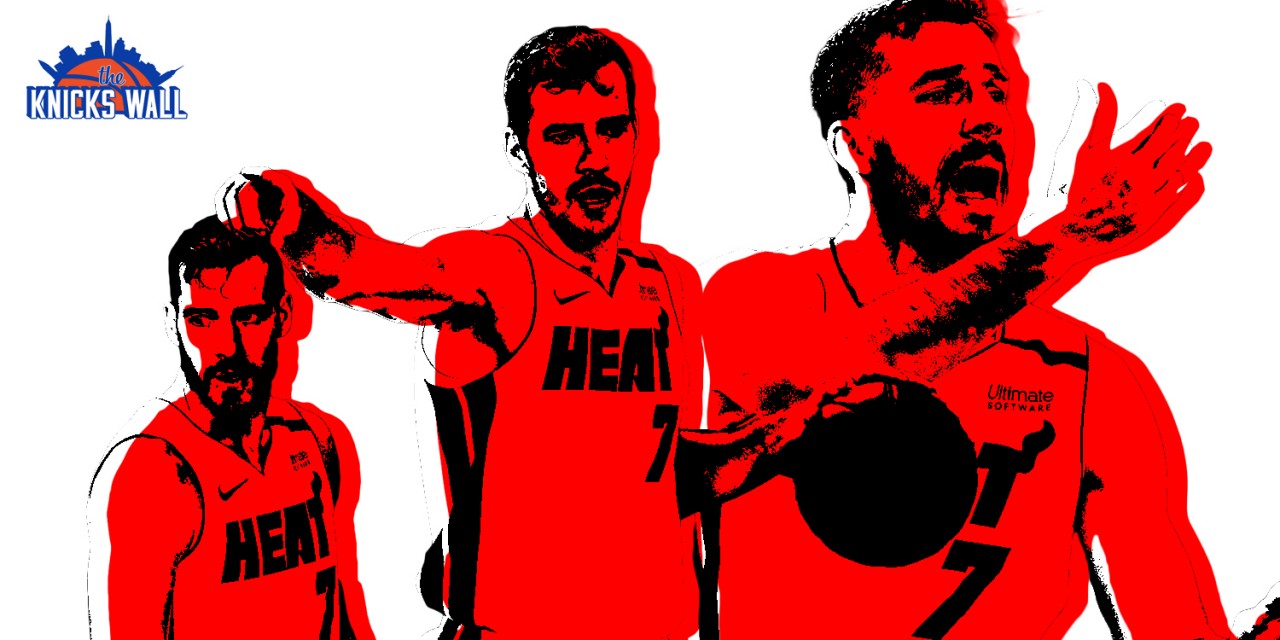 Goran Dragic is one of the the quieter free agent point-guard options for the Knicks this offseason. He could be cheaper than other options mentioned in passing.

The New York Knicks are in the market for a playmaker. Specifically, a dynamic guard to pair with R.J. Barrett and Mitchell Robinson who can also improve the culture.

“There are people in the organization who see the lead guard spot as a glaring weakness,” per SNY’s Ian Begley. “They are looking for a lead guard who can knock down a shot, because they see that as something that can really unlock things for a player like Mitchell Robinson in the pick-and-roll, and that can be very complementary for a player like RJ Barrett at the shooting guard spot.”

Two high-profile veterans who have been linked to the Knicks are currently garnering the attention of the NBA: Chris Paul, Leon Rose’s former CAA client, who could be heading to the Phoenix Suns, and Russell Westbrook, who wants to abandon the Houston Rockets ship.

The Knicks are reportedly interested in Fred VanVleet, too, and will likely use the No. 8 pick (or trade up) to nab a guard in next week’s draft.

They could offer something like a four-year, $85 million deal to VanVleet, 25, who is looking to cash out. Westbrook has three years and $132 million on his back-loaded deal, while Paul has two years and $85 million remaining. There are pros and cons to all three options, but another guard exists on the market whom Rose should consider: one-time All-Star Goran Dragic.

Dragic, 34, has plenty of game left. He averaged 16.2 points and 5.1 assists for the Heat in 2019–20—mostly as a sixth man—including a team-leading 20.9 points per game over the first three playoff rounds before tearing his plantar fascia in Game 1 of the Finals (it did not require surgery and he is expected to be ready for next season).

The Knicks pursued Dragic under Phil Jackson, but Pat Riley beat him to the punch by trading two first-rounders to Phoenix, then giving the Slovenian slasher $90 million. Five offseasons later, things been relatively quiet on the Dragic front—besides a friend of James Dolan “reporting” that Dragic (and Tyrese Haliburton) was a target of the front office.

Part of this is because Miami and Dragic are mutually interested in running it back, and with good reason. He’ll help them contend next season, and provides valuable mentorship for Tyler Herro and Kendrick Nunn (including coming off the bench). In September, The Ringer’s Kevin O’Connor reported that league sources expect him to stay in South Beach.

But Miami will not commit major money beyond 2020–21 with Giannis Antetokounmpo’s free agency looming, meaning a balloon one-year deal is the likeliest scenario for Dragic.

“Miami has interest in re-signing” Dragic, but “won’t do anything that jeopardizes their chances with Antetokounmpo,” ESPN’s Zach Lowe wrote last week.

“I want to be happy,” Dragic expressed to the Sun Sentinel in October about his free agency. “I’m at that stage of my career where it’s not only about me. It’s about my family, my kids, my wife. I do have to admit, I’m really happy … There’s still a lot of uncertainly in the future.”

Dragic will have multiple suitors after his stellar performance at Disney World. If he decides to entertain multi-year offers from non-contenders, ESPN’s Bobby Marks recently posited that his salary range could land at “2 years $10M per with another team. 1 year at $16-18 with Miami. It’s hard to see him getting 3 years at his age.

“It’s also very hard seeing him going to a rebuild like in New York,” Marks added.

Fair. In all likelihood, the Knicks would need to offer Dragic two years and a player option, in the ballpark of $70-75 million to draw him from a winning organization to a rebuilding one. (Worth noting: Dragic shares an agent with Barrett, Bill Duffy.)

The thing is, it’s easy and enticing to envision Dragic alongside Barrett and Robinson. He can play on-or off-the-ball, thrives in pick-and-roll, and can space the floor. He could improve both the team’s league-worst assist rates and three-point shooting figures. And it’s never a bad thing to add a “steward” of #HeatCulture.

He’s always been a pick-and-roll threat, dating back to his Most Improved Player campaign in 2013–14, when he posted the highest points per possession (0.98) for any PnR ball-handler with a frequency above 37%. As Tom Rende of Forbes noted, Dragic was more effective in pick-and-rolls (0.94 PPP) than Westbrook, Jamal Murray, De’Aaron Fox, and Jrue Holiday last season.

Dragic is not Prime Steve Novak (36% in his career), but he’s respectable enough to improve the Knicks team-wide production from deep. He shot 37.7% in 2019–20 while attempting more than ever (5.7 per game). He can create triples for himself, his teammates, or spot-up, and his accuracy remains steady in any scenario. 43 of his threes were unassisted last season. Of his 81 assisted threes, 37 were off passes by Butler or Herro—showing he can play alongside other playmaking guards. He made 48 pull-up threes this season at 37.8%, and shot 16-of-30 on step-backs. A quarter of his three-pointers were catch-and-shoot looks, and he made 36.3% of those. Plus, he set up 110 threes for his teammates.

Erik Spoelstra used pick-and-roll sets to create threes for Dragic, too, a tactic Tom Thibodeau could employ with Barrett, or a rookie handling the ball. (Dragic shot nearly 57% from the left corner, and 46% from above the break in 2019–20.)

Lineups with Dragic and Butler had an 111.0 Offensive Rating in 2019-20, and it’s possible he could have relatively similar chemistry with Barrett.

Furthermore, it’s hard to overstate the positive impact that two (or three) years of steady, dependable point guard play could have on Robinson and Barrett’s possession-to-possession improvement. (Also: the more lefties, the better!)

The Knicks have desperately needed a point guard for eons, and Dragic, even in his mid-30’s, would instantly be their best since Marbury and one month of Linsanity. However, he wouldn’t necessarily have to fill that void. Even if the Knicks overpaid Dragic, they could pair him with a cheap and complementary backcourt mate via the draft such as Tyrese Haliburton, Kira Lewis Jr., or Killian Hayes.

Dragic would undoubtedly help the Knicks franchise, on the court and in the locker room. But the Rose administration has to be prudent about how they allocate their expected $40-45 million in cap space, and Dragic doesn’t significantly move the needle or draw eyeballs. Personally, if the Knicks are going to write a fat check on a guard, I’d prefer Paul or VanVleet, though Dragic represents a different type of acquisition—less buzzy, more practical.

Sure, the Knicks could save money and bring in D.J. Augustin or (gulp) Jeff Teague. They could hope for Dennis Smith Jr. and Frank Ntilikina to make noticeable leaps under Thibodeau and improve the roster elsewhere. They could trade for Victor Oladipo—which he seems to want—but that doesn’t make sense until they see him play more.

In the short term, the Knicks should be prioritizing gradual organizational improvement rather than luring superstars or making grand leaps, and Dragic undoubtedly checks boxes as an example-setter and consistently productive lead guard.

Stylistically and culturally, he’s an obvious fit. In terms of age and money, maybe not. Either way, it’s worth considering.

»READ: Why Jrue Holiday should be on New York’s radar