Should the Knicks Retain Derrick Rose or Trust Immanuel Quickley With a Larger Role? 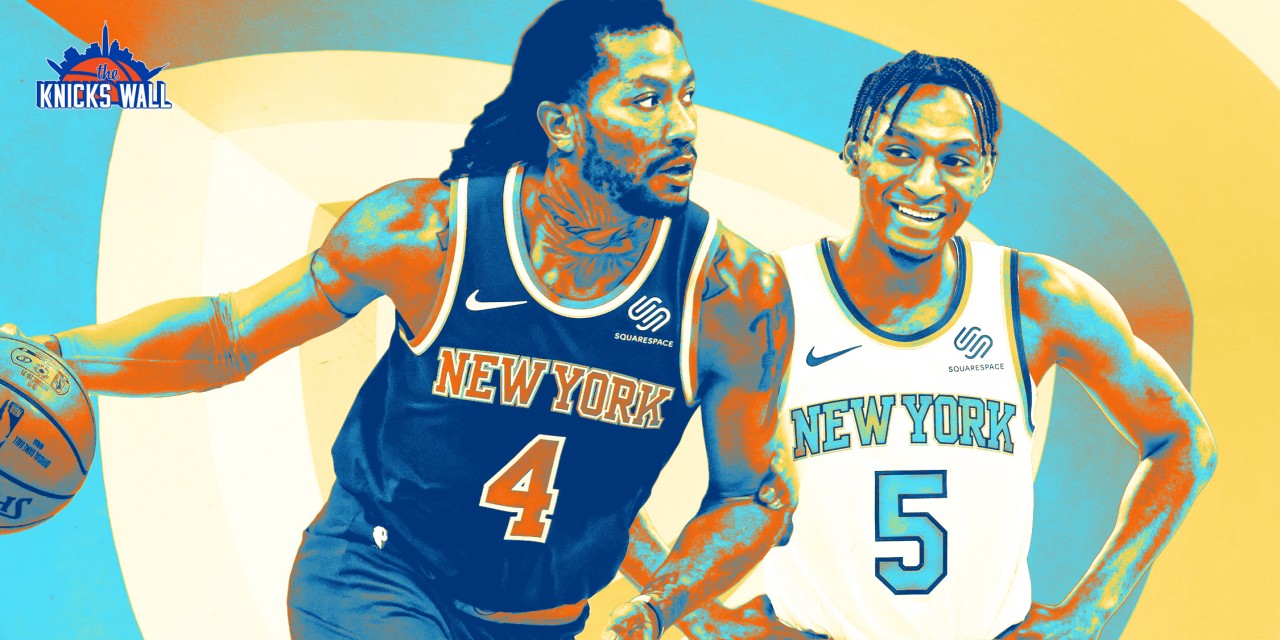 When it comes to the backup point-guard role, the Knicks have, among many options, the choice of retain Derrick Rose or handing it to Immanuel Quickley.


If you were to ran the New York Knicks’ internal free agents based on likely they were to return next season, Derrick Rose would be on the top of the list.

It makes sense. Rose experienced a renaissance after the trade that brought him back to New York from Detroit. Even though Rose failed in supplanting Elfrid Payton as the starter, Rose was a key player in the team’s offensive plans. Rose averaged 14.9 points, 4.2 assists, and shot 41.1% from downtown in his 35 games after the trade and looked like the best player on the floor for New York in their five-game series defeat against the Atlanta Hawks in the 2021 playoffs.

Not only that, but the relationship between Rose and current Knicks head coach Tom Thibodeau remains rock solid. Thibodeau has some say in New York’s offseason plans in a world where Derrick Rose feels like a safe return and a key free agent for New York to retain. The two have joined forces in Chicago, Minnesota, and now New York and Thibodeau seemed comfortable with Rose running the offense from day one, and once the Knicks needed to make a change in the playoffs, Rose was shifted into the starting lineup.

But is that the right way to go for the Knicks?

Derrick Rose was a solid contributor for the Knicks

Entering his age-33 season, Rose is coming off a solid season. One that saw him continue to evolve his game, shifting from the athletic force from Chicago to a more wily veteran, capable of picking his spots. Rose now shows another level of shiftiness, keeping defenses off balance with his ability to attack the rim for a floater and pull-up for an easy jumper.

However, some of the issues persist. Over his last three seasons, Rose has knocked down 35% from the three on 2.2 attempts, including a poor shooting season the year before with the Pistons. While he shot 41.1% from the outside during his Knicks tenure, that’s just off two attempts per contest. He might be a solid shooter on low attempts, but it’s tough to suggest Rose as a constant shooter over a larger amount of attempts.

Consider me skeptical of Rose as a defender. In Thibodeau’s system, Rose was largely capable of playing a bit of a free role, showing his ability to snag steals and make excellent hustle plays in the regular season. However, as the playoffs and Trae Young show up, the superstar point guard had no issues throwing Rose into a spin cycle of pick-and-rolls and simply moving past him. How does he handle a steady diet of Young, Ja Morant, LaMelo Ball, Russell Westbrook, and the likes for 30 minutes a night?

It’s fair to say that Rose’s best role is the backup point guard and sixth man on the roster. When the starting unit needs a boost, put Rose on the floor and allow him to provide a bit more speed to the lineup. Let him work with the second unit and operate some pick-and-rolls with alley-oop threat (and improving perimeter shooter) Obi Toppin. On nights where he’s on, you keep him to close out the game. On nights where he struggles, you don’t have to pay him a ton—a fine balance.

He sounds like a fine player, and the Knicks have the cap space, so what’s the issue?  Rose’s present value represents a bit of a roadblock for both Immanuel Quickley and Luca Vildoza.

The depth chart becomes a bit clogged up with Rose, Quickley, and Vildoza before adding a starting point guard

Once Rose returned to New York, the depth chart became Elfrid Payton as the starter and Rose as the backup under Thibodeau, with no one got much playing time at point guard when both players were available. The alternative, from there, was Alec Burks playing a “point guard” role, with Quickley assuming an off-ball role for most of the time.

As far as Vildoza is concerned, this also makes his path to minutes a bit more narrow. The Knicks jumped the gun by acquiring him shortly before the season ended. Still, based on the language of his four-year contract worth $13.6 million, the Knicks could cut the Argentinan guard without much damage to their cap space and future flexibility. If Rose is back and the Knicks add a starter above him, his $3.5 million for next season is in question.

So while Vildoza would also get a chance if Rose moves on, the biggest winner there would be Quickley, who could jump into a backup role and get even more reps on the ball.

Can Immanuel Quickley be the backup point guard of the Knicks?

Coming out of Kentucky, Quickley was viewed as an elite shooter but more of an undersized off-ball player than a point guard. Still, Quickley finished with an assist-to-turnover ratio over 2:1 (127 assists to 52 turnovers), even struggling to make more advanced reads and very few chances to operate as a pick-and-roll ball-handler.

In the conversation of “unlocking Quickley,” the conversation starts with playing him more amongst the likes of R.J. Barrett and Julius Randle and allowing him to launch more threes. But his true unlocking the former Kentucky Wildcat is seeing if he can maintain a larger load of the team’s ball-handling and creation responsibilities. Last year, it was largely Randle, Rose, and Alec Burks who got to create and run the show for their offense.

While there’s no apt comparison for Quickley, two analogs of intrigue are Denver guard Jamal Murray and former NBA guard Jason Terry. Before his unfortunate ACL injury, Murray continued to come into his own as an offensive player. An elite shooter, Murray matched his ability to space the floor with his propensity to slash into the paint and finish at the rim, something Quickley has yet to do in his short career.

Much like Murray, Quickley eventually starting alongside Randle would allow him to maximize his strengths while having someone to lean on for creation. Ideally, as Quickley gains experience in those lineups, he can operate the offense more and properly navigate the entire offense, taking some of the responsibilities from Randle as he gets closer to his second contract.

The Terry call is an undersized guard who was miscast as a point guard early in his career in Atlanta. Terry would move off the ball in Atlanta but didn’t truly thrive until he went to Dallas. As the Hawks shuffled through several options to hold down the position, they continued to go back to Terry, who could handle and even run some offense but was much more comfortable off the ball. He linked up with Dirk Nowitzki, found success in the backcourt with a point guard running the show, and eventually assisted in bringing a championship to Dallas.

There are many different levels for Quickley to reach, but one thing is for certain: the Knicks have a special talent on their hands. Do they look to give him more responsibility as a backup point guard, or do you continue to keep him off-ball for Rose?

When it comes to the New York Knicks and their offseason pursuits, the Knicks have to find a point guard. Some guys can link offenses, like Lonzo Ball but miss a key element when running the show. There are ball handlers, guys who aren’t the best at creating for others but can create for themselves and offer just enough team creation; think someone like Evan Fournier. The Knicks need a true lead guard.

If the Knicks decide to sign a starting point guard, it creates a situation for the Knicks, a balance between the present Also, a minor financial one. And the future. Also, a minor financial one. Should the Knicks retain Rose, say a one-year deal worth $10 million would make sense. On the other, the combination of Quickley and Vildoza, a combined $5.7 million, could also have some say for New York’s backup spot, and if they can handle the position, both players are locked on dirt-cheap contracts for the next three years.

With copious amounts of cap space, the Knicks don’t have to be frugal here. However, balancing the need for Derrick Rose next season against giving Immanuel Quickley and Vildoza a larger role will be a question nonetheless as unlocking Quickley could push the ceiling of the Knicks higher in the upcoming seasons.

»READ: The unbelievable people that made the 2020–21 Knicks unforgettable