Should the Knicks Trade for Dennis Smith Jr.? A Debate 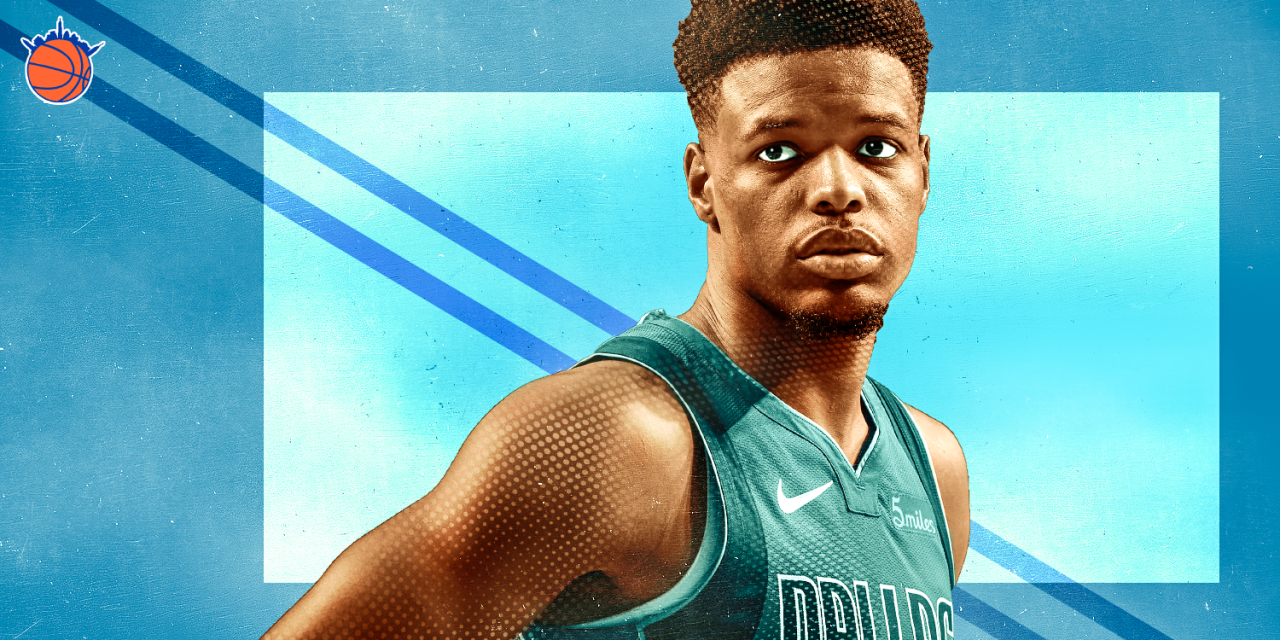 With reports that Dallas’ young guard Dennis Smith Jr. is on the trading block, Kyle Maggio and Ty Jordan debate whether the Knicks should be all in on acquiring the infamous pick after Frank Ntilikina.

League reports signal that the Dallas Mavericks are ready to trade their point guard Dennis Smith Jr. Smith, the NC State product, was selected in the 2017 NBA Draft, memorably one pick after the New York Knicks selected Frank Ntilikina.

The Knicks had tested out Smith Jr., even imploring him to try octopus at a restaurant where ex-President Phil Jackson hosted a dinner with the then-draft prospect.

Smith is apparently holding out from team activities with the Mavs following a bumpy sophomore season with regression overshadowed by the emergence of the 2018 draft’s third-overall pick Luka Doncic.

This all comes to a head with the stunted development of Ntilikina, who could even be swapped in a deal that could net the ‘Bockers Smith Jr. Clearly, Frank and DSJ are extremely different projects and offer diverse skill sets. Trading for Smith could ostensibly put an end to any dreams of developing Ntilikina into a legitimate perimeter defender and stable offensive presents at point.

That being said, we brought staff writer Ty Jordan and TKW Podcast co-host Kyle Maggio together to debate the question: should the Knicks trade for Dennis Smith Jr.?

Ty Jordan, for no:

21 years old is still pretty young, even in the impatient NBA, which is why the Knicks would be foolish to give up the young asset the Dallas Mavericks would obviously be asking for. There’s a limited list of assets and prospects the Knicks can realistically trade for Dennis Smith Jr. That list consists of Frank Ntilikina, Kevin Knox, and their 2019 first-round pick. There’s not much else that isn’t getting the phone hung up on you if you’re the Knicks.

Trading Knox, the reigning Rookie of the Month, would be boneheaded now and later. The Knicks are painfully lacking depth at the forward spots. They have themselves a potential volume scorer and rebounder in Kevin Knox. Why would the Knicks trade in two plus-skills for one? Both Knox and Smith are shooting below the league average at the rim this season, but Knox is averaging 14.6 points in January to Smith’s 10 points while both shoot around 40 percent from the field. Knox isn’t perfect, but he clearly has been improving since his slow start. It’s encouraging, unlike Smith making his team markedly worse when he’s on the court. He’s a tank piece in the hyper-competitive Western Conference and in the league of Trae Young and Collin Sexton in the East.

Dennis Smith Jr. is practically the promising a prospect as he was at the onset of last summer. Let’s be clear: this isn’t a hit piece. He’s a quick, explosive lead guard who can give you 10+ points a night. His 12.6 points per game and 3.9 assists per game this season is a far more eye-catching average than what Frank Ntilikina has done thus far. His draftmate is averaging 6.0 points and 2.6 assists on the season. In fact, Ntilikina can barely stay on the court.

So, a swap of Ntilikina for DSJ in their second season sounds like a win for the Knicks, right? Congratulations, you now have two Emmanuel Mudiays. Although Mudiay may not have the speed to compete with Smith, his mid-range jumper is a wrinkle in his offensive game that Smith Jr. hasn’t quite hacked. Citing Mudiay’s age helps no one, as Smith is 21, and Mudiay is 22. I don’t believe Smith is the real deal. He could easily struggle on a team much worse than the Dallas Mavericks. Mudiay is doing fairly well on a team devoid of legitimate scoring threats this season, his recent slump notwithstanding. Why would the Knicks add another not-quite-good-not-quite-bad point guard who pretty much does the same thing as the guy they could re-sign for pennies during free agency?

Smith Jr. can run the floor like Fizdale urges the group to do every trip up the floor. His average pace this season of 102.9 isn’t too far off from the Knicks’ most recent 102.6 over the last few games. He’s a marvel to watch when he decides to go at Mach 5 speed, but he doesn’t offer much after that. His Defensive Rating has dropped from 109.3 to 106.7 since his first season, but he still has a long ways to go.

In addition, Fizdale’s “experiments” with position-less basketball wouldn’t go over well with the 6-3, 195-pound guard. It’s doubtful he’d be asked to play shooting guard with Tim Hardaway Jr. being backed up by Allonzo Trier and Courtney Lee, but defending guards and sometimes wings may be too much of an ask for Smith. If the Knicks hope to implement a modern defense, they’ll need to switch, and, as quick as Smith is, he’ll be barbecue chicken on the switch every time. Even with his improved defensive capabilities, Smith is a liability to risk a swipe that could end in a foul or an easy bucket at the rim. In other words, his stature limits the effectiveness of the defense whereas Ntilikina’s and Mudiay’s size at least gives them the potential to stifle defenses from muscling them or taking advantage of a height mismatch.

For what the Knicks are trying to build, Dennis Smith Jr. is enticing, but his deficiencies and his fit already make almost any deal stink. The Knicks are looking for the long-run, but DSJ isn’t even a short-term resolution to their point guard troubles. Trading for him would solve nothing besides answering the question of what would happen if he were a New York Knick instead of a Dallas Maverick.

My “yes” is more so based on overall value relative to the Knicks’ future than it is about saying I’d take Dennis Smith Jr. over Frank Ntilikina.

Look, it’s no secret the Knicks are aiming to make a splash this summer. They’ve even shot down trades and referenced they can just sign free agents—and a few names have been linked to the Knicks since last summer. So with this in mind, moving Hardaway Jr. and Ntilikina is a reasonable request for Dennis Smith Jr. and Wesley Matthews, Dallas’ other burden, even if it hurts to see the former guys moved.

Tim Hardaway Jr. is set to make $18.15 million dollars next season and about $19 million the following year. Now, it’s no secret how much I fight for Hardaway, but if it means putting a hard reset on the cap space and opening up room for the 2019 and 2020 free-agent class, I think you have to do it. Furthermore, you still retain the value of a lottery pick from the 2017 NBA Draft in Smith. Essentially, we are just swapping lottery picks and clearing a ton of cap space in the process. The other issue here lies in moving on from Frank Ntilikina, which most aren’t ready to do.

I love Ntilikina. But Frankie hasn’t really helped his own cause this season. We’ve seen a string of DNPs on the heels of poor performances; we’ve see flashes one night, then it disappears for weeks at times. His averages are down across the board, aside from “dramatically” raising his scoring average from 5.9 to 6.0 points per game, and his vaunted defense has slipped up much more frequently than a season ago. We haven’t seen the strides we’d hope to see him take this season, especially on the offensive end, and while it’s not all his fault (the inconsistent playing time and playing him in difficult positions), he needs to step up sooner rather than later. You need to be able to score to stay on the floor in this league—and he needs to figure it out.

It’s a fine gamble and a necessary evil to trade him if it means opening up that much salary, and you still come out of it with a lottery pick. DSJ is the better player right now, and while Frank may be the better player in the long run, that’s far from a guarantee at this point. Smith has made some improvements this season, despite being shifted off-ball to accommodate rookie Luka Doncic. Smith’s shooting percentages are all up; his field goal percentage jumped from 39.5 percent to 44.3 percent. His three-point percentage rose from 31.3 percent to 37.5 percent, and his two-point percentage jumped from 43.5 percent to 47.9 percent. His passing and defending still leaves a lot to be desired, but his scoring may develop into a more efficient and lethal weapon.

After all, Smith is only four months older than Ntilikina.

I probably wouldn’t do the trade, as I think you can get more for Hardaway and you can trade him in the summertime if you need to make room to sign a big free agent, but I’d have to say that it’s a more even trade than Knicks fans would like to realize.