Should the New York Knicks Be Interested in D’Angelo Russell? 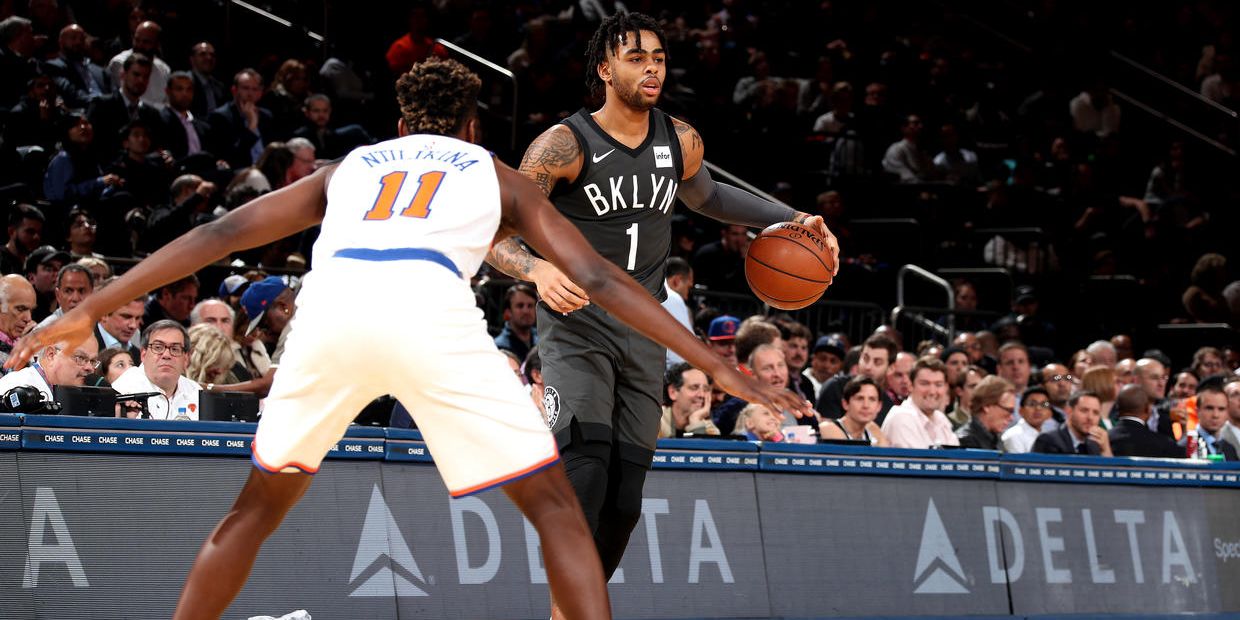 A max contract for D’Angelo Russell would be unwise for the Knicks, but picking up the young guard should Brooklyn dump him could be helpful to the rebuild.

Could the New York Knicks find themselves entering D’Angelo Russell this summer?

According to SNY’s Ian Begley, if free agent guard Kyrie Irving were to sign with the Brooklyn Nets, Russell could be headed out of the door, allowed to pursue other avenues in free agency. Russell, 23, is coming off a season in which he averaged 21.1 points, 3.9 rebounds, and 7.0 assists and earned his first All-Star appearance.

“If Irving ends up signing in Brooklyn, it may have an interesting ripple effect on the roster, particularly D’Angelo Russell.

“Russell, a restricted free agent, will likely draw significant interest on the open market. The 23-year-old is coming off of an All-Star season in which he helped lead Brooklyn to the playoffs. Members of the Pacers organization are high on Russell” [SNY]

The next question is, should the New York Knicks be interested in acquiring D’Angelo Russell?

Due to Kevin Durant’s ruptured Achilles, the Knicks are forced to change their offseason targets, looking to add to their young core. Russell, at just 23 years old, fits that criteria and offers New York someone who offers both production and modest upside to a roster sporting several young talents.

Much like Brooklyn did last season, Russell could play alongside another point guard and provide another ball handler and floor spacer—36% three-point shooting on 635 attempts last season—to New York’s roster. And while he’s not a true lead guard, Russell saw his assist rate reach a career-high 41.3%, while his turnover rate went to a career-low 13.6%.

For a New York team that could sport as much as $72 million in cap space this summer, signing D’Angelo Russell gives them a valuable piece to help this season while keeping their cap sheet clean for the future.

However, just how much of that do you want to offer Russell and is he ultimately worth it?

If Russell remains a restricted free agent, then New York, along with every other suitor, must find a number that both Russell agrees with and Brooklyn finds expensive enough to let him walk. That number could be somewhere around $22 million, or, that could be Russell’s max contract number, which starts at $27.3 million.

As good as Russell was last season, a max contract would be a questionable proposition for the Knicks. Russell has shot over 200 free throws just once in his career, getting to the line under 3.0 times a game. He’s also a poor defender, getting substituted out of late-game situations as recent as this season. For all his volume, Russell is a relatively inefficient offensive player as well.

New York’s roster also doesn’t fit the addition of a player like Russell. Guys like Allonzo Trier and Kevin Knox are offensive-first players and Dennis Smith Jr. seems to enjoy the ball in his hands, whether it be to attack the basket or create for others. And if New York drafts R.J. Barrett at the end of the month, there will be several players looking to hold on to the ball.

The New York Knicks should be interested in D’Angelo Russell if he were to become available. His combination of age and shooting have elevated his game and makes him an interesting piece for a team looking to add and cultivate young talent.

However, with multiple suitors—Begley’s piece referenced the Pacers as one—and the potential price tag to pry Russell out of Brooklyn, this one free agent just might be a pass for the Knicks.

»READ: Are the Nets a threat to the Knicks’ free-agent aspirations

»READ: Despite Nets’ salary-clearing move, not all is lost for Knicks in free agency