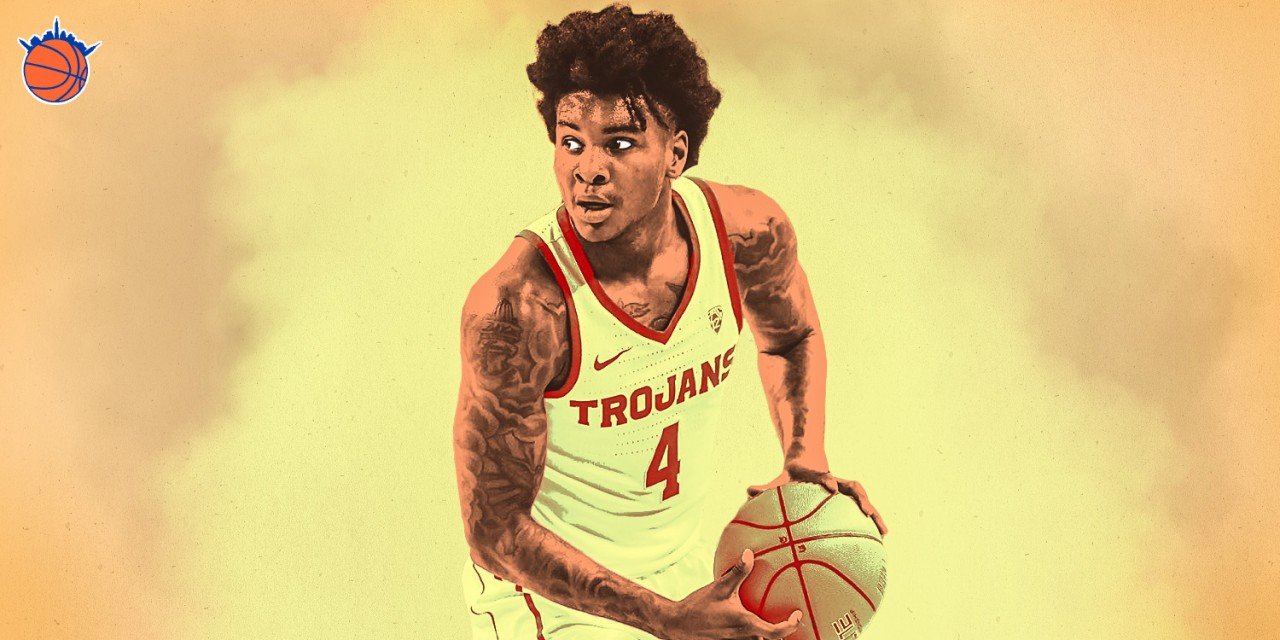 Once considered a top-10 talent in the draft, Kevin Porter Jr. has seen his stock fall into the mid-to-late first round. Should the Knicks acquire another first to select the USC product?

The Knicks Wall is setting a spotlight on the top prospects in the 2019 NBA Draft. Follow along with weekly features on the draft and players. Next up is USC swingman Kevin Porter Jr.

Moving south from Seattle, Kevin Porter Jr. had a roller coaster year in his lone season at the University of Southern California. After exploding out of the gate with dazzling scoring performances off the bench against National Runner-Up Texas Tech, among other teams, Porter Jr. was touted as a lottery-bound talent during the early portion of the NCAA season.

Things started to go south in a figurative sense when he suffered a quad injury during the Trojans’ fifth game of the season. Sidelined for the greater part of the next two months, Porter made his much-anticipated return against Oregon State, only to subsequently miss the team’s next two games as he was suspended by the coaching staff for “conduct issues.”

Porter rallied to finish the season somewhat strongly with back-to-back solid performances in the Pac-12 Conference Tournament, ending his collegiate career by totaling 17 points, six rebounds, two steals, and a block against Conference Defensive Player of the Year Matisse Thybulle and Washington.

Playing limited minutes per game both due to injury and lack of trust from his coaching staff, Porter posted unimpressive averages for the year but managed to stand out when accounting for his limited minutes. Per 40 minutes, he averaged 17.2 points, 7.2 rebounds, 2.6 assists, and around a steal and a block apiece on 47.1% shooting from the field and 41.2% accuracy from three-point range. Porter’s impressive efficiency demonstrates his ability as a scorer, and the fact he attained these numbers playing primarily through pick-and-rolls and isolations speaks to his NBA-ready style of play, even if it doesn’t align with the slower-paced, team-oriented college game.

Heralded primarily for his scoring ability, KPJ’s middle portion of the season raised questions of his character and commitment to basketball. Let’s take a deeper look at Porter’s game and see if he could fit into the Knicks’ plans this summer.

Porter’s ability to score the ball will be the main reasoning for any team to take a gamble on him, and is by far the greatest part of his game. Porter showcased the ability to score the ball from all three levels last season, whether it be in isolation or off feeds from his teammates. A significant portion of Porter’s buckets came from the former, indicating his potential as shot creator at the next level.

On the perimeter, Porter knocked down 18 of 47 attempts from NBA three-point range, and only half of the makes were assisted. He showed an impressive ability to shoot the ball from distance, whether it be via a filthy step back or off the catch-and-shoot. Being capable of stretching to the NBA three-point line will go a long way in opening up other options for Porter offensively.

Additionally, KPJ shot a blistering 71% at the rim on 41 attempts, relying frequently on either the space created due to the threat of his jumper or the ability to use his size to finish through contact and larger defenders.

Kevin Porter Jr. will be the biggest steal in the draft whenever he decides to come out. I been telling y’all this young man is a problem.
pic.twitter.com/xAKpy5DF4H

Porter’s stats from the mid-range are underwhelming, even without accounting for efficiency, as his accuracy from the area varies from 29 to 37%. A savvy front office would be wise to look to remove this shot from Porter’s game since he can already score prolifically and proficiently at the two more analytically friendly shots at the rim and behind the arc.

few notes
-I don't like kpj's tendency to settle for long 2s. He has the skillset to get to the rim more and pass more, but these shots make me question his feel
-the amount of separation he creates on that shot is insane pic.twitter.com/4amotPEEdD

Listed at 6’6″ and 220 pounds, Porter boasts the ideal size to play on the wing at the NBA level. His offensive skillset gives him the ability to be either lead or off guard on offense, while his size allows him to hang physically guarding 1-3 on defense. He even holds his own when matched up against some power forwards.

This is some excellent on ball D from KPJ, activity and intensity, quickness, fluidity turning his hips, moving his feet and sticking with his man. pic.twitter.com/wwu81LWzlu

Almost equally as important as his NBA-ready build is Porter’s demonstrated cognizance of his size and ability to use it to his advantage. KPJ’s strength enables him to bully smaller guards in transition, while his quick-twitch agility allows him to change directions at the whims of larger defenders, keeping them off balance while attempting to stay in front of him. Additionally, Porter is adept as using his sturdy frame to draw fouls at the rim and finish through contact. In sum, KPJ already possesses the ideal frame and strength to ensure his skills translate to the next level.

One of the biggest knocks on Porter’s game is his inability to play with a sharper focus consistently. His lapses appear the most frequently on the defensive end of the court—more specifically when defending the pick-and-roll or assigned to a matchup off the ball.

Unsurprisingly, KPJ is ultimately a below-average defender, though he has hardly been coached on this end of the floor at the young age of 18. He’s very aggressive in pursuing steals, and while he occasionally comes away with a few swipes, he frequently jumps out of position while attempting to take the ball.

When met with a screen, Porter’s energy and engagement saps; he falls asleep when guarding off ball because his eyes are glued to the ball. This lack of effort can be attributed to either Porter’s motor or the coaching he has received. The definitive answer is unclear right now, but it is certain there are lapses in this portion of his game.

However, when engaged, Porter shows flashes of being an average-to-plus defender. Using his frame when locked in, Porter is capable of smothering smaller guards on the perimeter and banging with small-ball bigs in the post. If a coaching staff can unlock consistent effort and energy from Porter in all facets of his game, he could become a two-way menace in the league for years.

Decision Making: On and off the court

Carrying over from some of the weaknesses that currently plague Porter’s defensive game, the holes in his offense similarly stem from poor reads on the court.

KPJ isn’t a willing passer right now, often looking to get his offense through isolation. Porter often determines what he wants to do before getting the ball—and it shows through frequent turnovers while looking to force a pass or taking a heavily contested shot.

These are habits that can be fixed by a strong coaching staff with proven ability to develop raw scorers. The ability to read and react against a defense as opposed to making predetermined decisions on offense will be the difference between whether Porter is a high-level offensive player or just a sparkplug off the bench.

Off the court, Porter’s decision making faces similar scrutiny, though it should come with a grain of salt. Known by some as a hothead coming out of high school, Porter sought the advice of fellow Seattle native Jamal Crawford on how to conduct himself in the pros. Losing his father early in his life, Porter’s relationship with the former Knick filled a humungous void in his life:

“Really it was all about things off of the court,” Porter said of his conversation with Crawford. “Jamal would talk about how to make it far off of the court. How to be a role model. He told me I needed to grow in my mental maturity and as a leader. And he was like, ‘You know, you could really be something special – once you get it.’ And I feel like I got it now. When I lost my father, I really didn’t know, like, what having a father figure is like. Having him, he was basically filling that role for me. It’s a blessing, really.”

With the mentorship of an 18-year NBA vet, the 18-year-old has the right role model in his circle to correct the drama that surrounded his suspension this season. Starting only four games last season, Porter was rarely in his coaching staff’s good graces. Earning the respect of his next staff will go a long way in determining the likelihood of Porter reaching his potential at the next level.

Is he a fit for New York?

Overall, KPJ is a prospect with tantalizing upside that makes him look like the next James Harden on the best of days, and a downside that could make him the NBA’s next Jordan Crawford. His combination of both handle and size will enable him to continue getting buckets at the next level; Porter’s level of commitment and effort will be the determinant of how valuable he is.

On the surface, Porter’s lone connection to the Knicks appears to be his relationship with Crawford and a game that’s reminiscent of Allonzo Trier’s with a more willing three-point shot. With his stock dropping to the mid-to-late first round due to his suspension and injury, Porter is not an option for New York even if it drops to the fifth pick in the lottery. Additionally, with Porter’s skill set largely overlapping the abundance of ball-dominant guards the Knicks both currently have and plan to target (read: Kyrie Irving), KPJ’s style of play does not match with New York’s ideal roster construction moving forward.

However, if the team is planning to continue rebuilding before free agency, New York could do worse than trading back into the first round to select Porter if he slides into the late teens. Ultimately, it would be a surprise to see Porter wind up in a Knicks jersey, despite him possessing tangible upside as a scorer, due to concerns about his all-around game and motor.

»READ: Is Nassir Little a reach for the Knicks?