Should the Knicks Keep Julius Randle Around? 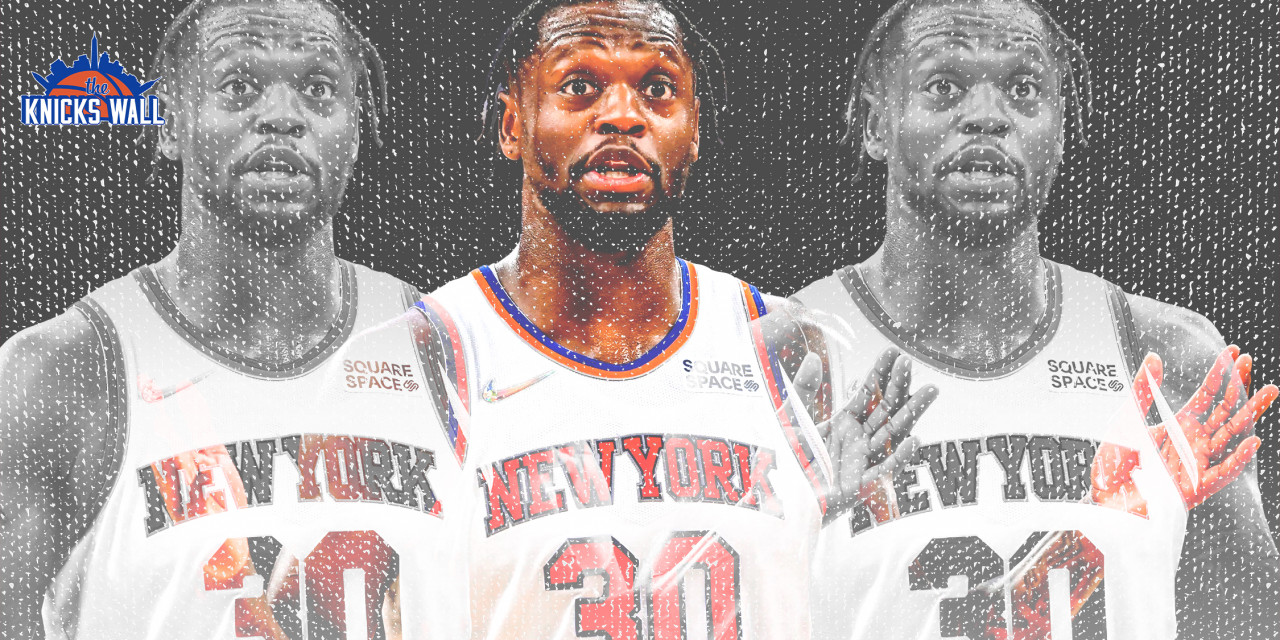 Julius Randle and the Knicks no longer seem to be a good fit together. Although he is signed to a lengthy contract, it’s time to move on.

There was a period right at the start of February when it looked like Julius Randle might be turning the corner, or better yet, returning to the form he took last season. From February 5th to February 16th (a seven-game stretch) Randle never scored fewer than 28 points in a game, averaging 29.6 per game on 46% shooting. Let’s throw in his 12.4 rebounds and 6.3 assists, too. Why not, right? Such an electric, stat-filled stretch deserves a full appraisal.

Here’s the problem, and why, in the grand scheme of things, that run doesn’t matter: the New York Knicks went 1-6 over those seven outings, and despite his offensive output, Randle’s plus-minus was a -4.4 on average. And since returning from the All-Star break, Randle has been wildly uneven, scoring 22.0 points per contest and nailing just 7.7 of 19.0 field-goal attempts (40%). He scored 46 against Sacramento on Monday night; the night before, he scored just 10. New York is 2-4 since February 25th. (“This is fine” meme).

The Knicks entered the All-Star break arguably looking the worst they’ve looked all season while Randle looked the best he’s looked all season. Now, they’re back to looking like the worst version of themselves, at least when they’re not playing players aged 25 or younger. Correlation does not imply nor equal causation, but it’s hard not to draw a pretty hard conclusion from such odd disparities: Randle and the Knicks don’t elevate each other. Perhaps they never did.

The Knicks, however, aren’t going anywhere. They’re the staple in this equation, not Randle. He’s expensive now, to the tune of $117 million. But he’s movable. Even if he isn’t, he needs to be. In short, it’s time to move on.

Randle’s All-Star campaign last season was one of the stories of the season, in large part due to how unexpected it was. He had experienced an uptick in responsibilities since coming to New York in 2019 but never had he performed quite like he did in 2020–21. He was making absurdly difficult shots, scoring at will even when attempting shots more difficult than most players of his skill set might ever think to launch. Players sometimes talk about how the floor “opened up” for them; last season, the hoop doubled in size for Randle.

This season, though, that sort of shot feels so distant from being Randle’s repertoire, and when he does attempt, he seems so far away from the player he was last season. In 2020–21, 50% of his shot attempts came from midrange, which falls in the 96th percentile among bigs—he made 43% of them, in the 58th percentile of big men, per Cleaning the Glass. But in 2021–22, he’s shooting just 40% of his attempts from mid-range, and knocking down just 37% of them, placing him in the 37th percentile of players at his position.

He’s not less aggressive now but his decisions are more suspect. He seems to second guess the smart play—he’d rather pull back and settle for an ill-advised jumper than continue sprinting off a screen when he has a defender beat. It’s as if he’s desperate to rediscover the shots that came so easily last season.

When it comes to attacking the basket, the problems are similar. He wasn’t exactly a buzzsaw in the paint last season, but he just can’t seem to finish his gimmes. In the below clip, the Heat’s defense is taking away literally everything but the basket. Randle beats everyone but rushes an opportunity for free points.

And in this one, I don’t even know what goes wrong. It seems like his talent has been usurped by one of the Nerdlucks from Space Jam. He’s getting to the right spots and finding shots that one would hardly describe as difficult, but he’s coming up short again and again.

Maybe there’s a chance that Randle’s play hasn’t exactly nosedived to the point of no return, or to the point where it’s not yet time for the Knicks to move on. Players have experienced slumps before, far worse than this. But the Knicks don’t exactly have time to find out what they really have in Randle.

They paid him a serious chunk of change, but he can still feasibly be moved. Especially when you consider what the Knicks already have in their cheap (at the moment) youth and the reality that they should be building around those players. One of them in particular. (Okay, maybe two.)

None of Randle’s struggles will be helped by the reports that there is “concern inside the Knicks organization” about the “overall psyche” of Randle as the team’s struggles continue. Per the New York Post‘s Marc Berman (“Good job, Marc”):

“Randle’s overall psyche is of concern inside the Knicks organization, according to an NBA source,” Berman wrote. “The source said Randle didn’t come into training camp in the same type of sensational shape as he did last season, before Thibodeau’s first year guiding the Knicks. Perhaps that prevented him from being the type of two-way player — giving energy on both sides of the ball — that he was during his second team All-NBA season.”

With all of this in mind, what can the Knicks realistically get in exchange for a power forward they’d be best served by moving on from? Perhaps there’s a deal involving Randle and a pick for Atlanta’s John Collins (and a sweetener; Randle’s struggles are well-documented, but Collins alone won’t be enough for New York). Collins hasn’t filled the second scorer role that Atlanta desperately wants besides Trae Young, a void Randle can easily fill—he just can’t be a team’s number-one option. Plus, imagine the two-man game that Collins and Barrett could run. You thought Obi Toppin’s dunks were wild?

Or maybe there’s a deal to be made with Dallas. Every New Yorker and their mother should clamor for the chance to have a floor general of Jalen Brunson’s ilk setting up the offense for the Knicks. Who wouldn’t love a Tim Hardaway Jr. homecoming?

“How about Randle for Zion straight up?” asks John from Queens.

In any case, it’s becoming more and more apparent that Randle’s time in New York is fleeting. The team made a magical run to the playoffs last season, but Randle flamed out there, too. If Leon Rose and co. have any sense, they’ll seek every option to start fresh, with a youthful core and a new approach to their future that doesn’t involve an inefficient $117 million man. If they don’t, they’ll bleed out. That is if that process hasn’t already begun.