Should the Knicks Re-Sign Emmanuel Mudiay? 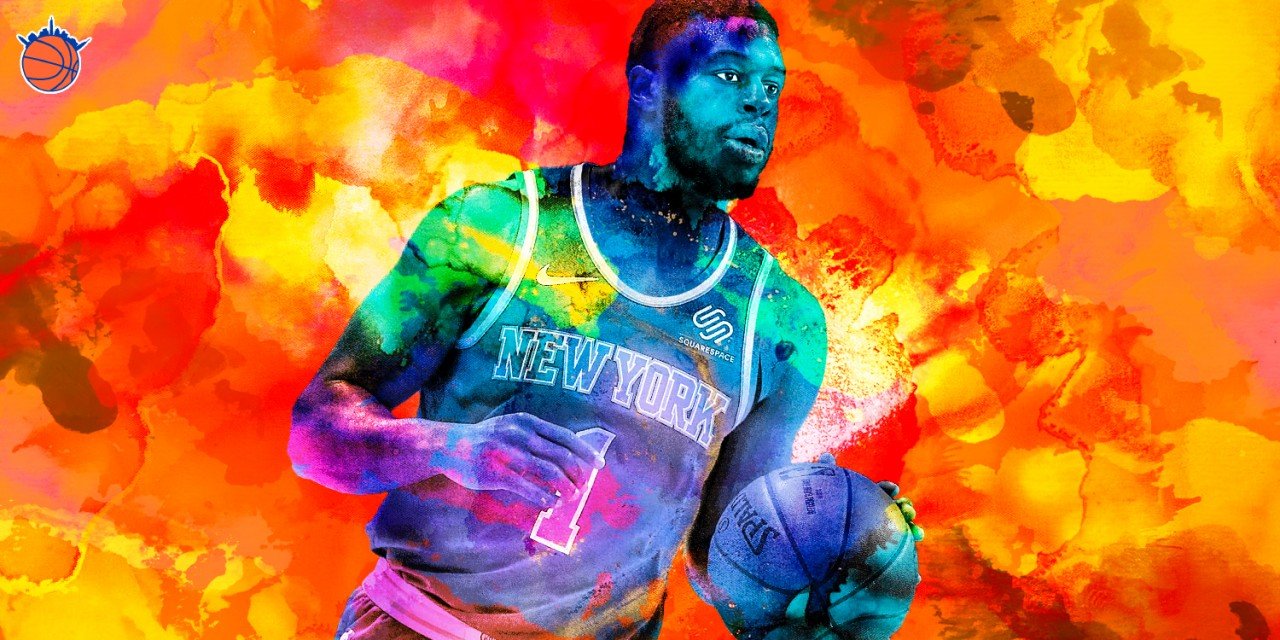 A deep dive into the strengths but mostly weaknesses attached to guard Emmanuel Mudiay’s game, and a solemn answer to whether the Knicks should re-sign him or not.

“We’re going to get you right,” David Fizdale promised Emmanuel Mudiay in his first presser as the new head coach for the New York Knicks.

These words would end up haunting Knicks fans for the rest of the season as they watched the four-year player miss shots and dribble away possessions.

When he was hot, he looked like a competent sixth man. When he struggled, Knicks fans recalled every terrible point guard we have given significant playing time in the past 10 years.

Yet for all the criticism, Mudiay scored nearly 15 points per game on almost 45% shooting from the field with this past season. Not bad for a 23-year-old labeled a bust. So, where is all this hate coming from? Is it fair? More importantly, should the Knicks even consider bringing him back?

In the 2018–19 season, Mudiay averaged 14.8 points on 44.6% shooting from the field, 32.9% from deep, and 77.4% from the charity stripe (NBA Stats). While not bad, all three are slightly below league-average shooting splits. The Knicks struggled at scoring (as well as every other aspect of basketball), but Mudiay was a day-in and day-out decent offensive option on the surface.

Mudiay’s biggest upsides coming into the league were his athletic gifts and NBA-ready body; he was bigger and faster than other point-guards—and defensively, his 6-foot-9 wingspan would cut off passing lanes and nab the ball from smaller matchups.

Almost five years after the draft, his inability to use those clear physical advantages on the court makes the discussion of his game more about his weaknesses.

This past season, Mudiay was finally able to use one of those assets. When driving to the paint, he began to lead with his shoulder like LeBron James, and push his defender slightly in order to gain enough room to unload from 8-10 feet.

Mudiay was great from the mid-range. Not just good—great. He nailed 46% of his shots from that area, which puts him in the 84th percentile for all point guards.

But did he suddenly develop into an elite mid-range jump shooter, or is this just an outlier?

Considering Mudiay’s futility from three-point range, it’s easy to say this will not be sustainable. His mid-range mastery was an over 10% increase from last year.

Look at the his first four years in the league from mid-range: 32%, 29% (one of the worst point guards in the whole league that year), 33%, then 46%. While he was dominant, it didn’t appear to be a trend from which one could confidently predict his percentage will grow, or even stay the same.

The most obvious advantage Mudiay has on the court is his speed. When inspiration strikes, he can sprint past any cracks in the defense and head right to the rim. Combined with his wingspan, this should translate into easy buckets for the Knicks.

It didn’t. According to Cleaning the Glass, Fizdale’s favorite player shot only 52% at the rim, good enough for the eighth percentile of all point guards. Despite being three inches taller than the average point guard, 92% of point guards shot better this season.

For context, 5-foot-9 Isaiah Thomas has never shot that poorly from this range. 52% is only slightly less than the much-maligned Stanley Johnson’s career average in that range.

Although praised for his first step entering the draft, Mudiay’s poor three-point shooting allows defenders to stay closer to the paint.

Another advantage that an athletic guard brings a team is more foul shots. Mudiay had 4.2 free throw attempts per game and was fouled on 9.2% of his shot attempts—the lowest of his short career—and about middle of the road for all point guards, according to Cleaning the Glass.

This clip just about sums it up.

Mudiay is wide open for a corner three, but the Kings just don’t care. He shot 32.9%, two percentage points lower than league average at the position where three-point shooting is the most important.

Four years in the league and his shot has not improved.

Even All-Star-level mid-range shooting doesn’t make Mudiay a great scorer in general. Weighed down by his ineptitude in the two most important aspects of scoring, easy shots at the rim and behind the three-point line, Mudiay’s True Shooting percentage, 53.1%, is below the league average of 55.6%. Mudiay shot at essentially the same TS% as the Knicks as whole, 52.9%.

I spent so much time on Mudiay’s scoring ability because it’s really all he’s shown during his career. Mudiay will never be a true floor general. This past season, he averaged 3.9 assists per game—third out of the Knicks’ harrowing point-guard rotation, behind Kadeem Allen and Dennis Smith Jr.

In his first season with Denver, Mudiay averaged 5.5 assists per game—but three years later, during his “breakout” season, he matched the same number as his second, sophomoric season.

Mudiay’s assist-to-turnover ratio was 1.63, ranking 89 out of 98 point guards who qualified. Even Frank Ntilikina had a 2.16 ratio. After the All-Star break, Mudiay averaged only one more assist than turnover at 3.8/2.9.

The game isn’t fluid for him. He can’t see plays developing before they actually happen. While he can often run a good drive-and-kick, creating a play leaves him clueless. Just watch him attempt to set up Allonzo Trier here on a 4-on-2 fast break:

He passes at the worst time, so all Trier can do is run straight into the defense and hope to be bailed out with a foul call.

Mudiay’s Defensive Rating this past season was 116, which was worse than the Knicks’ overall rating of 113.7. With superior size and athleticism, his prowess on defense was a likely upside, but his advantage in size is yet again limited by his decision making.

When defending the pick-and-roll, he gives up 0.87 points per possession on 44.4% shooting; right in the middle of league at the 50.2 percentile.

When defending in isolation, he allows 0.91 points per possession with a 43% field goal percentage, which puts him below average at the 41.9 percentile.

Against the most important play to defend, the pick-and-roll, Mudiay always goes over on screens, then struggles to get back in the play:

Mudiay’s inability to recover after a screen leaves the roll man’s defender alone guarding two players. You can see him make these type of lazy defensive sequences game after game:

Even worse, he gets stuck in no man’s land attempting to interrupt the passing lane, while ultimately leaving his man wide open and not getting in the way of the pass at all.

Mudiay does nothing here to stop the ball from getting to DeMar DeRozan. He just stands in space and allows a 42% three-point shooter an open look.

Here he leaves Reggie Bullock, a 39% three-point shooter, wide open—to do what? Walk around?

When looking at Mudiay’s stats, a lack of linear progression makes it hard to predict where he will be in five years, or even next season. In four years in the league, with only an above-average mid-range jumper last season, it’s easy to think he won’t ever be a core part of a roster.

Check out this list of guards, since 2010, who put up a similar assist-to-turnover ratio and similar TS%. Everyone on that list is a journeyman or rookie. Not someone to whom a team should dedicate a lot of money or playing time.

Despite the potential of his athleticism and size, at some point Mudiay needs to show results. If, after four years, his greatest strengths are still his physical tools—not anything he’s produced on the court—it’s obvious he’s not someone the Knicks should keep around.

»READ: What if the Knicks never selected Kristaps Porzingis at the 2015 draft?