If All Else Fails…Should the Knicks Sign DeMarcus Cousins this Summer? 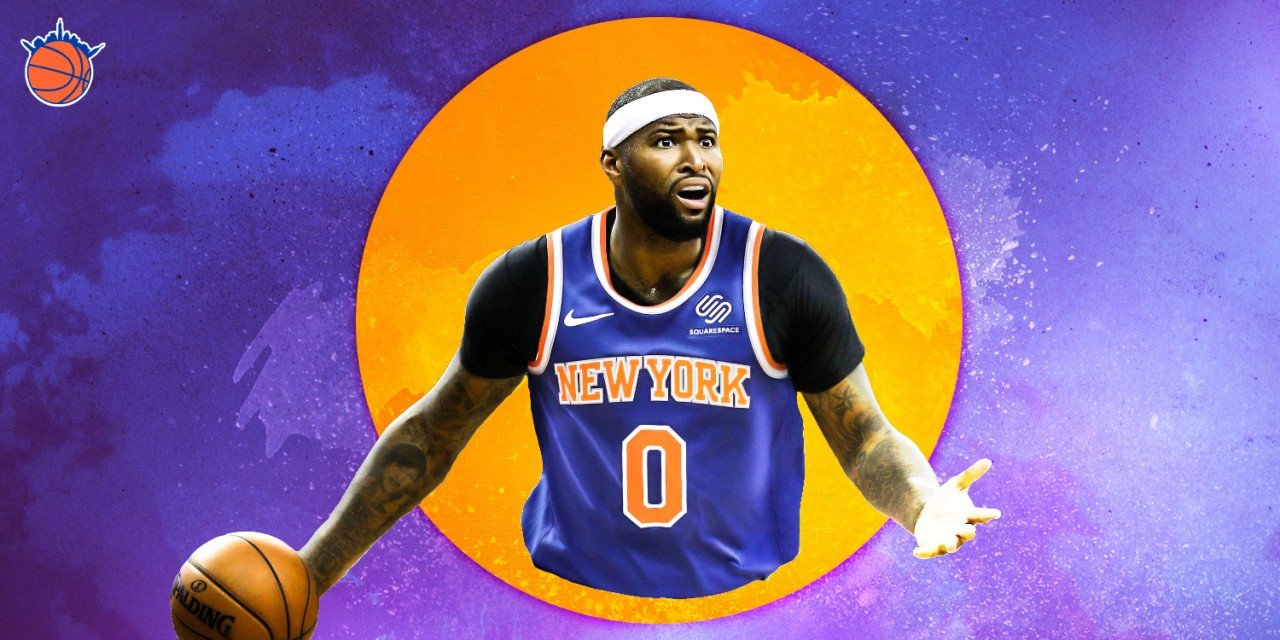 The Knicks have long been linked to Warriors forward Kevin Durant, but perhaps his teammate, DeMarcus Cousins, who’s coming off an Achilles injury, should be the free-agent target.

The New York Knicks will have two max salary cap slots this summer. This much is known.

They will pursue Kevin Durant and Kyrie Irving with those max slots. This much is not confirmed, but might as well be known.

If that fails, they will look at all other options—Kawhi Leonard (if he opts out of returning to Toronto), Klay Thompson, Jimmy Butler, Kemba Walker, Tobias Harris, Khris Middleton, and even a noticeably aging Al Horford—before picking up the phone, and dialing DeMarcus Cousins’ agent. This much I know.

But this much I believe: the Knicks should at least consider building around Cousins, for the right price.

Cousins has somehow been a disappointment for the Golden State Warriors, despite coming into the season as their ultimate luxury, a prototypical weapon for them with next to zero expectations. The Warriors, coming off back-to-back championships without ever having a dominant inside presence, signed Cousins to the NBA equivalent of a “friends with benefits” contract—a one-year, mid-level exception worth just $5.3 million.

It made sense and still does. At that price, the risk of signing Cousins was minimal, while the potential payoff—a level of talent at the center position they’ve never even flirted with before—was too good to turn down.

Which is why, as Boogie lumbers and sulks through games, racking up more whistles than productive counting statistics, it doesn’t hurt that bad for the Warriors.

It still hurts a little.

Cousins has bricked every three-point shot he’s vomited up, shooting 24.2 percent from deep on three attempts a game, and looked slower, less explosive, and generally more discombobulated than he ever did before rupturing his Achilles last season. The Warriors, in the meantime, have gone through their roughest patch of regular season basketball in about five years. Many have pointed the finger at the gargantuan wearing number zero manning the middle.

So, why in the world would the Knicks ever want someone like that on their team?

First of all, they wouldn’t: not if any of the more stable, higher-upside free agents are still on the table. If they strike out on names like Durant, Irving, and Leonard, however, it wouldn’t be a shock for them to prioritize signing someone like Cousins.

Why? Because Cousins was a superstar just one year ago. We all suffer from short-term memories when it comes to sports, but Boogie was in the midst of a career year with the New Orleans Pelicans before his injury. He finished his truncated season scoring 25 points per game, grabbing 13 rebounds, and dishing 5.4 assists. Most impressive of all, he did this while co-existing with another generational big man in Anthony Davis, something he might have to do with Zion Williamson should he end up in New York.

The Boogie and AD pairing was never effective enough to play championship-level basketball in New Orleans, but there was reason to hope. After starting the season off rocky, Davis and Cousins won seven of eight right up to the moment they lost Cousins for the season. They passed the eye test, too, with Boogie coming into his own as a pick-and-roll ball handler (!) and high-post facilitator.

That version of Cousins is worth a super max, warts and all (he averaged a ludicrous five turnovers, and had his usual struggles with efficiency). No one knows whether he is coming back or not. This version of Cousins, a lead-footed knockoff, is not.

But the Knicks are rudderless right now. They have a bunch of players who are malleable, and that means they’re susceptible to long stretches of losing basketball. NBA players can accrue “scar tissue,” a real degradation of confidence and career momentum after going without hope for long enough. The Knicks are 14-58. That is the definition of hopeless basketball.

Cousins would bring some semblance of hope. He is, if nothing else, a dogged competitor. And for all the noise about his annoying basketball habits, only two are legitimate: whining to every official and turning the ball over at a Russell Westbrook-esque rate. Watch Boogie play for a whole game and you’ll see a seven-footer challenge shots at the rim, stay in constant dialogue with his teammates, and level enemies in the paint. He plays hard.

And in recent weeks, he has started to show signs of life. The Warriors are putting him in a lot more little two-man games with Durant. They’re posting him up on the left block, and he’s shown an uptick in playmaking, averaging five assists over his past five contests before sitting out two games with a nagging ankle injury.

If he can stay healthy, and that’s a big if, there’s some precedent with what Paul George is doing this season—hitting his absolute apex five years after one of the most gruesome leg injuries in NBA history. Guys like Cousins can become franchise stars again.

The Knicks need a light at the end of the tunnel like that, no matter how unlikely, and that desire goes beyond the fans. The players, the coaches, the front office, even James Dolan (especially Dolan, actually) all seem weighed down by the total void that has existed at Madison Square Garden for decades now. It says a lot when Knicks fans reminisce about a Carmelo Anthony–led 50-win team like they were one of basketball’s great dynasties.

Which means that Cousins’ ability to deliver a championship to this franchise is actually not as relevant as you might think. All New York needs is something, anything to cheer for. If nothing else, Cousins can reenergize the Garden. He is a snarling, tattooed nuclear reactor; sometimes he emits harmful radioactive energy, but other times he can power entire countries.

That still isn’t worth a super max, which is why the Knicks need to be careful with how much they’re willing to commit to any free agent not named Kyrie, Kevin, or Kawhi. How much is Boogie owed, really?

The best course of action—and remember, this is if New York strikes out on the bigger fish—would be to push for Cousins, but in tandem with floor-spacing wings like Khris Middleton or Cousins’ current teammate, Klay Thompson.

The Knicks could build around a core of Cousins, a Thompson or Middleton type, whatever draft pick they land, and Kevin Knox. They would be switchable on defense, space the floor on offense, and be able to dominate the paint. This would also allow Mitchell Robinson, one of the Knicks’ crown jewels, to be a pure defensive specialist while developing his offense slowly.

If the wheels fall off the wagon—let’s say Cousins never recovers from his Achilles tear, and his mere presence prevents a Zion-Mitchell frontcourt from blossoming—then it will be imperative for the Knicks to have signed him to a tradable contract.

Make no mistake: taking much smaller risks this summer—even if they equate to another losing season—is a much better strategy than doling out a Boogie-or-Bust-sized contract to Cousins.

At an appropriate price tag, Cousins can still be a risk worth taking. The Warriors did it with him this season, and even though it hasn’t produced stellar results, he’s still offered a lot more value than almost every guy signed to a mid-level exception.

It’s evident we’ve all been too quick to judge him, too. Achilles injuries are tricky, and have just as much to do with regaining confidence as regaining full range of motion and explosiveness. Any long-term return to form Cousins experiences will not be linear.

Which is why the Knicks should at least make a call for him this summer. If the asking price is even a smidge too high, hang up the phone—but there’s a chance  he can still be a 25-13 seven-footer who can facilitate and shoot threes. That guy is in there somewhere, and we see glimpses of him from time to time, like against Houston on March 13, when Cousins put up an impressive 27 points, eight rebounds, and seven assists in 31 minutes.

For that guy, you at least make the call.

»READ: Could the Knicks be Kevin Durant’s next challenge?

»READ: Do the Knicks have a clear path toward Kyrie Irving?

»READ: Are the Nets a threat to the Knicks’ free agents aspirations?