Six Knicks Questions on the Precipice of a New Season 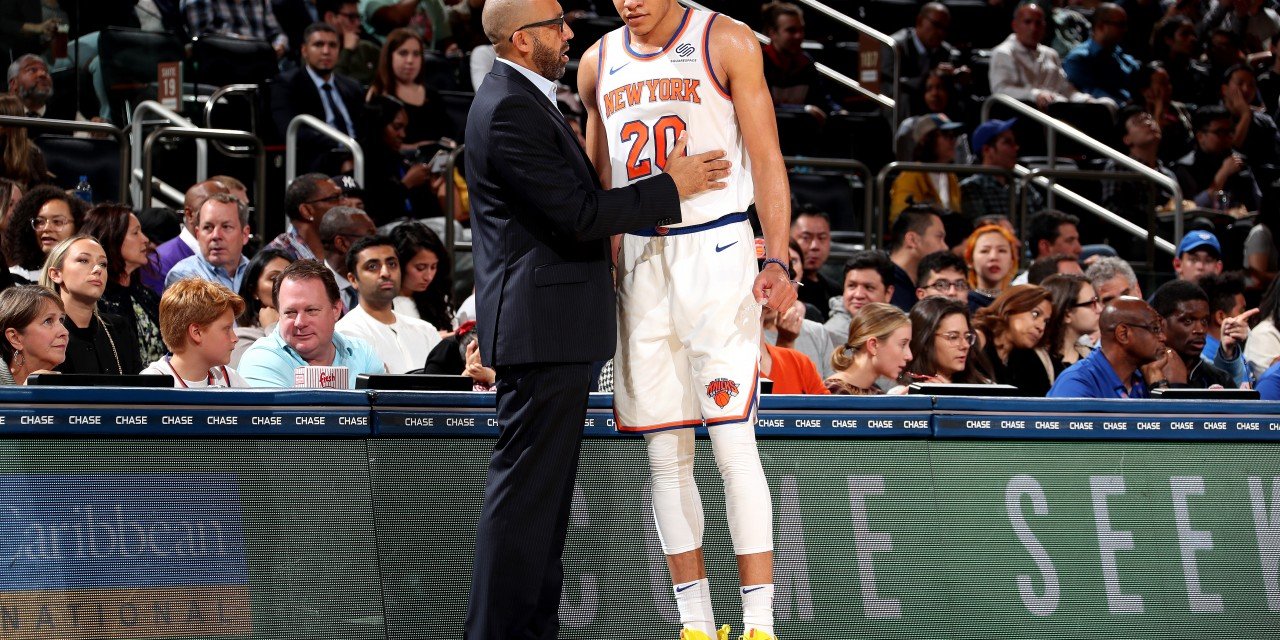 Ah, the smell of a new season. It’s like stepping into Willy Wonka’s Chocolate Factory and basking in the sweet, sweet aroma for the first time. Some teams are able to spend months and months in the world of imagination, soaking up all that it has to offer. For the Knicks, they’ll get to smell the cocoa for all of a minute and then immediately head into the Tunnel of Terror. The difference between Wonka and the Knicks is that New York knows where the river is flowing and which direction they are going.

The minute Kristaps Porzingis went down, the tankerrific times were going to roll on through the 2018–19 season. R.J. Barrett, Cam Reddish, Romeo Langford and company await in a few months—when they’ll be paid a normal NBA contract instead of having to participate in Coach K’s nefarious shenanigans. Until then, the Knicks will do a bunch of losing, but it’s nothing we haven’t braced for. Let’s look at a few pressing questions that stand out for David Fizdale’s crew this year.

1. How will the starting lineup look in a week? A month? Two months? How about THREE months?

Following a somewhat surprising call by David Fizdale to start both Frank Ntilikina and Trey Burke while benching Kevin Knox, we’re left with a question: did Fizdale stay true to his word? He said just days ago that Knox would be in the starting unit, but then opted to pin the rookie to the bench to light a fire under him after a brutal finish to the preseason. In one sense, Fizdale fibbed, saying he would start Knox and then proceeding to, well, not. On the other hand, we know what his mentality has been all offseason: keep what you kill. Ultimately, despite noting that he would start, Fizdale stuck by his mantra in establishing a culture and making his guys earn it. I’d like to see Knox in the starting lineup sooner rather than later, but logically, the decision on Fiz’s part makes complete sense.

Tim Hardaway Jr. and Enes Kanter are locks in the starting lineup. As long as they have a clean bill of health, they’ll be locks. Despite Fizdale’s message about accountability and earning your spot, these guys will start no matter what. Please don’t entertain other possibilities—the Knicks need their scoring.

Beyond that is anyone’s guess. Fizdale has a special affinity for Lance Thomas’s veteran moxie and defensive acumen, so it’s fair to expect he’ll start the vast majority of games. Burke’s success last year was mostly unsustainable and he had an underwhelming preseason. Ntilikina is young, and with the decision to bench Knox, Fizdale is holding strong onto his tough love mentality. If Frank struggles early on, it wouldn’t be surprising to see him move to the bench.

Through all of these decisions, the starters are not even close to the most important factor. Playing time and New York’s closing lineup are significantly more important when evaluating the rotation pieces. Keep a closer eye on those, rather than who daps up the opposing squad before tip.

2. Can Mario Hezonja snap out of his preseason funk?

This will be Hezonja’s fourth season in the NBA. His performance in the preseason shouldn’t be used to extrapolate his game out for the entirety of the 2018–19 campaign. Five preseason games shouldn’t define our feelings on a dude that has played 219 games in the Association and did things like this last year:

The Croatian swingman can be a monumentally frustrating player to watch. He throws unnecessarily flashy and telegraphed passes, his shot selection at points would make J.R. Smith salivate, and he is consistently inconsistent. But let’s see what he can do given his fair share of minutes with this club. He shot nearly 34 percent on about four triples per game last year; the Knicks will need that shooting off the bench. Scoring in the 67th percentile of spot up shooters, he also provides ball handlers around him a fantastic option on the wing to nail open triples. His versatility provides Fizdale and his coaching staff with the ability to play him alongside other wings, and considering that Hezonja spent nearly half of his minutes in Orlando last year at the 4, he’s a clean fit alongside bench units featuring Kevin Knox and Courtney Lee.

Patience is the name of the game. Think of that word as the Desus and Mero rainbow above the 2018–19 New York Knicks.

3. How will the backup guard minutes shake out?

Starting Burke and Ntilikina means that the Knicks will have their two best guards in the starting lineup. That’s great! After these two, the role of backup point guard will go to…Ron Baker? Emmanuel Mudiay when he’s healthy?

It’s not a pretty picture. Allowing his wings to control the ball more will ease the woes the Knicks have here (I’ve often said that THJ should be given more opportunity as a PnR ball handler), but the guard minutes have to come from somewhere. Fizdale has been enamored with Baker’s hustle, so perhaps he garners some attention. Mudiay’s debacle of a preseason culminated in him coming down with an ankle injury, and with his play, it’s murky as to what his role is with this team.

The most intriguing aspect of the Burke-Ntilikina pairing (whether Frank is technically starting at the 3 with THJ also in the lineup is neither here nor there) is how the two’s minutes are staggered. Could Burke come out midway through the first quarter and lead the second unit to begin the second quarter with Ntilikina on the bench? Could Fiz choose to flip them and put Frank in that spot? How these guard minutes break down will be something to keep a close eye on, considering we have some lineup data from last year to draw from.

Food for thought (via @cleantheglass)

There’s a bunch of noise with those figures, specifically in the Frankie without Burke department since the Frenchman’s best minutes came with Kristaps Porzingis, but the action item that’s worth monitoring the closest is how the guard minutes are doled out and how the Knicks elect to close games. I find it hard to believe a defensive force like Ntilikina would be tethered to the bench in the waning moments of a game, but his offensive deficiencies could lead to a date with the pine in some instances.

4. Will Frank Ntilikina be given the keys to the car?

This question seems to permeate the minds of Knicks fans everywhere. “Sure, that’s fantastic that Fiz decided to start Frank, but how often will he get an opportunity to run this offense?” Fizdale seems to have chosen this starting lineup because it gives him a few options to handle the ball:

Confidence is the name of the game for Ntilikina. His court vision impressed us from day one last season, but he still struggles with being aggressive and committing to an action. (Just pump fake around the rim one time Frank, please?) When he drives to the hoop with a purpose and is able to acquire a desirable angle on a defender, his length allows him to accomplish feats around the rim that has other guards green with envy.

I’m skeptical that the Knicks, and specifically Fizdale, view Frank as a point guard moving forward. But that doesn’t matter. Handing him and ball and allowing him to cook, whether he’s an off-ball guard, a defensive wing specialist, or indeed a point guard, is key in his development. He spent last season playing next to Baker, Courtney Lee, and just about every other guard on the roster last season. Lengthening the leash and letting him pound the rock in certain lineups would be a welcomed sight, as would utilizing him as a spot up option to help out his slowly-burgeoning three-point shot. So, basically treat him as a young guard that needs serious seasoning to reach his full potential. Got it? Got it.

5. How often will the Knicks shoot the triple?

The Knicks were 29th in the league last season in three-point shooting frequency, with threes making up just a tick under 25 percent of their shots from the floor. For a bit of context, the Nets, who finished second in the league to the outlier Houston Rockets in three-point frequency, shot them a little over 38 percent of the time. The Knicks need a serious reshuffling of their shot selection to usher this franchise into the modern NBA.

That hasn’t happened during preseason play. In chucking up 122 triples out of 442 total shot attempts in preseason, the Knicks shot 27.6 percent of their total shots from deep, a figure that would’ve been good for 24th in the NBA last year. No one is saying the Knicks should be puking up awful three-point attempts, but there are enough shooters on this roster who can shoot from deep. There are no excuses for them to not creep up toward league average this season under a coach that rejiggered a Memphis team to do that exact thing. Hardaway will undoubtedly be their leading man from downtown, but he can’t be the only one to head the charge. Courtney Lee needs to shoot more triples—he’s far too efficient from that area of the floor to not do so immediately. Burke could stand to attempt more treys (pun intended). Ntilikina wasn’t effective from three as a rookie, but as a guard in this league, he’ll need to improve if he has any hopes of becoming a long-term starter at the position. This quote from Fizdale has me stressed out already, and the Knicks haven’t even played a single game yet:

The Knicks entered play Saturday ranked 28th in 3-point attempts per game in the preseason. Does David Fizdale want to take more threes? “I’d like to. But right now, the way we’re shooting it, I don’t think that’s a great shot for us.” pic.twitter.com/ydjJDjMxLM

It’s simple math, Fiz! Come on! Three is worth more than two!

The attack on the proverbial ancient-shield generator has been going on for years now, but the Knicks haven’t left the chambers of Echo Base. It’s high time they hop on a speeder and join the fray.

6. Just how bad will this team be?

27.5 wins. That is the over/under for your New York Knicks this season. Westgate opened with the Knicks at 29.5, but dropped down two whole wins in light of…Mario Hezonja’s struggles? The over/under was always too high. And it’s still too high. Slam that under.

The Knicks won 29 games last year, with 18 in the bank before 2018 even began. Tim Hardaway Jr.’s scoring will win the Knicks a game or two all on its lonesome. He’ll also shoot the Knicks out of games. Knox’s development is going to be deliberate, as is Mitchell Robinson’s and the rest of the young Knicks crew. A new head coach at the helm attempting to instill a new culture doesn’t happen overnight.

After R.J. Barrett, who certainly seems like a near-lock to go first overall, there is a top tier of prospects that are exciting in their own right. Adding another lottery talent to this roster will continue to layer it beautifully and present it as a ripe conglomerate of talent waiting to bloom. Securing a superstar talent would be ideal, and the Knicks will need to add more to this roster if they have title aspirations at the turn of the decade, but whether or not they land a big fish, this roster has plenty to offer in the future and plenty to be excited about in the present. Just don’t expect those payouts to come in the form of W’s in the 2018-19 season.

We know what to expect this year, which is almost a breath of fresh air. Let the games begin.