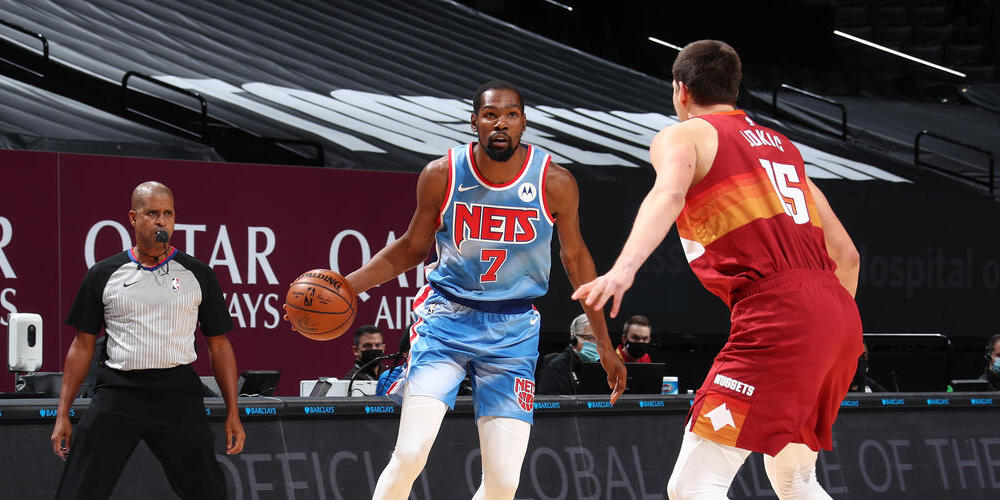 The Knicks are trying to break a three-game skid against one of the most tumultuous teams in the NBA right now, the Nets … who also have Kevin Durant this time around.

In their first nationally televised game of the season, the New York Knicks (5-6) look to snap their three-game losing streak against the Brooklyn Nets (6-6). Less than a week ago, there was refreshing encouragement and a positive buzz surrounding the Knicks as they were rolling, with consecutive quality wins against the Indiana Pacers, Atlanta Hawks, and Utah Jazz. Since their 5-3 start, however, the team has reverted to the same old Knicks; struggling with their shooting and defensive consistency.

The Nets, despite their underwhelming start, boast the third-best scoring offense in the NBA at 118.8 points per game, however, the Knicks are second in the NBA in scoring defense, per NBA Stats, so something has to give. Simply put, the Knicks will need to bring defensive intensity again tonight that Coach Tom Thibodeau has done such a good job getting his guys to buy into all year.

With the acquisitions of superstars Kevin Durant and Kyrie Irving in the 2019 offseason, the Nets are more under the microscope than ever. Rookie coach Steve Nash has had a lot to deal with in his first 12 games, most of it a product of Irving going rogue and causing so many strange headlines and distractions.

Videos have surfaced of Kyrie Irving at a large birthday gathering alongside his sister, Asia.

Given the size of the gathering & now public nature of it, Kyrie might now have to undergo a quarantine period before returning. https://t.co/McrYtFH9XK pic.twitter.com/U4T1KAvMTl

Brooklyn on the court has had somewhat of a disappointing start, partially due to the absence of Kyrie and KD working himself back from a devastating Achilles injury and the fact that he missed time due to health and safety protocols. Durant will be there tonight and it is evident that he hasn’t missed a beat and looks more formidable than ever.

Despite Durant’s excellence, the Nets haven’t really figured it all out quite yet and this will be a great opportunity for the Knicks to right the ship and get back on track against a  rival and a team that has endured a lot in this young season.

It is no secret that R.J. Barrett has been struggling with his shooting this season, a department in which Knicks fans were looking for dramatic improvement from last year. Barrett on the year is shooting a poor 36.5% from the field and 18% from three, per ESPN Stats, and has been held under 11 points in three of the Knicks’ last four games.

Sure, you have some people on Twitter calling for him to be benched or even sent to the G League, but broken down, Barrett hasn’t even played a full 82-game slate yet and he has looked more engaged this season and has improved his rebounding and passing. Tonight will be a great opportunity to get back on track for the 20-year-old, who faces one of the weaker defensive units in the Association.

Obi Toppin, after missing the last 10 games with a calf strain, is probable, per Knicks PR. It is unclear what Toppin’s minutes will look like this evening, but it is a great sign that he is back in action.

»READ: Kevin Durant and the Nets should give the Knicks nothing but fits this season

»READ: Knicks vs. Nets: whose future outlook is brighter?