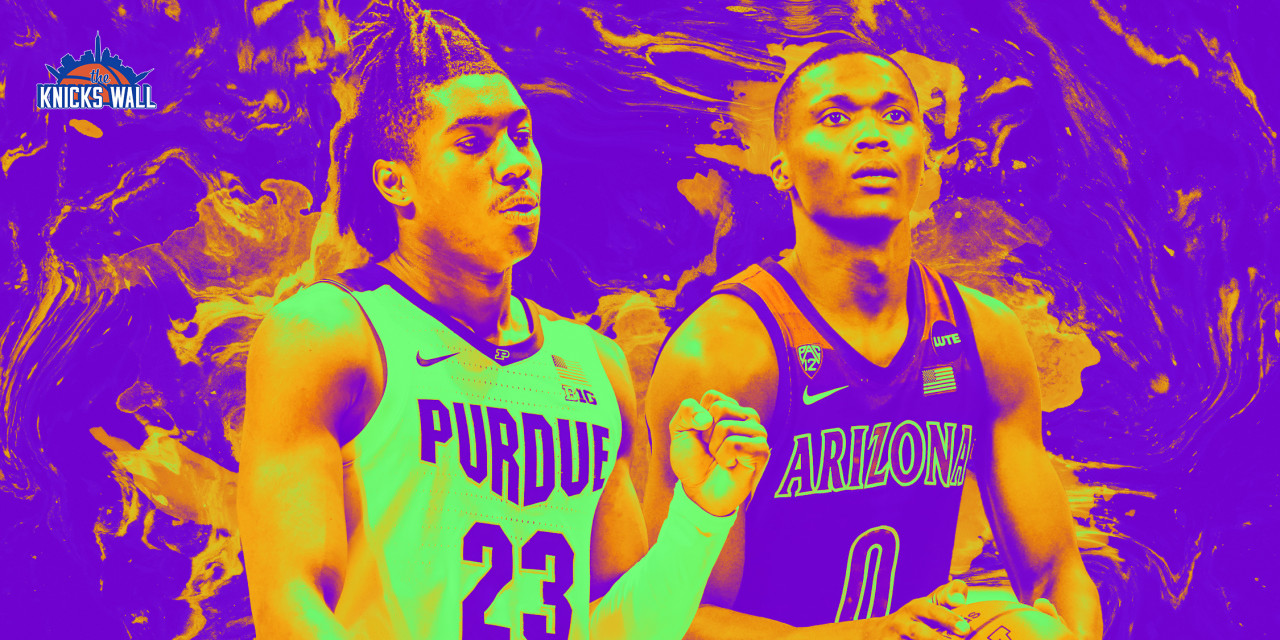 The 2022 NBA Draft could present the Knicks with opportunities for talented sophomores and upperclassmen, betting on “older” prospects.

Throughout the years, there have always been cyclical trends in the NBA, and those trends are often reflected in the NBA draft. Whether it has been a shift in play style such as the recent shooting boom, or teams trying to recreate the success of centers such as Shaquille O’Neal, you can always see what successful archetypes NBA executives are looking to emulate. NBA front offices will always try to find the next big thing, typically by trying to replicate the last big thing.

We have seen this with the rise of international prospects in the last few years, but one constant has always been looking for potential. Potential is hard to quantify in the draft evaluation process, but it is always exponentially increased by a younger age.

The younger a prospect is, the higher their potential ceiling is when looking at their growth trajectory. If two players are producing at similar levels in college basketball but one is 19 and one is 21, the 19-year-old will be leaps and bounds better in terms of prospect evaluation because he would theoretically have much more room to grow.

One significant shift we have seen in the last decade is the rise of the “one-and-done” prospect. Prior to the one-and-done rule, prospects straight from high school were risky propositions sprinkled throughout the lottery with boom-or-bust type of outcomes. However, with the added experience of a year in college, the narrative has started to turn about the benefit of younger prospects.  These young players have gone from scattered throughout the first round to becoming the majority in the lottery and becoming more and more surprising with every non-freshman prospect.

While there have still been and always will be older players in the NBA draft, they typically round out the end of the first round and the late lottery at the most. Between the increased popularity of international prospects, as well as the pendulum swinging towards freshman players, there have been fewer and fewer traditional college prospects in the lottery. With non-traditional patterns such as “G League Ignite” and “Overtime Elite”  becoming more popular for prospects outside of the NCAA’s iron rule, you would anticipate that older college players are even further by the wayside.

In the last five years: there have been nine non-freshman college prospects drafted in the top 10 in the NBA draft and only two of those players have landed themselves in the top five. It is becoming rarer and rarer for non-freshman players to be top five picks for a plethora of different reasons.

That takes us to the 2022 draft class, one that is widely considered an extremely weak class. This was an interesting class on paper going into the college basketball season and it is one that has already disappointed. There have been a handful of prospects evaluated as potential top 10 or even top five picks in the preseason that have played their way out of the lottery.

You have players like Jaden Hardy that was a prospective number one pick out of high school, who disappointed in his stint in the G League and is now frequently projected outside of the lottery. Hardy is not the only player, you have players like Caleb Houstan and Peyton Watson who have also potentially fallen out of the first round completely.

For a player like Watson, going to UCLA prevented him from opportunities due to the returning players filling the bulk of the rotation. Houstan went to Michigan to compete and has become the third-leading scorer at a team floating around .500 in a very disappointing season. These sorts of factors coupled with individual performance and stats can massively deplete a players’ draft value.

The lottery will likely have fewer one-and-done prospects than recent years, and some of those players currently filling up the back end of the lottery in mock drafts were preseason top prospects that could have even been considered the number one pick. Jalen Duren of Memphis and Patrick Baldwin Jr. of the University of Wisconsin-Milwaukee are talented enough for a team to take a risk on them due to raw talent alone, but their freshman years have severely hurt their consensus stock. PBJ went to a UW-Milwaukee team that is on the low end of college basketball teams where he is being asked to take a primary creation role that he is not suited for and that has changed his draft value drastically. Meanwhile, Duren, who is a rim-running freak athlete best suited for catching lobs, went to a Memphis team where he is playing without a legitimate point guard.

These players and others may end up being great NBA players, but for the time being, they are on free falls on mock drafts and big boards around the world. Those tapped into the most recent intel from the NBA such as Chad Ford and Sam Vecenie have all made significant changes to their boards from the beginning of the year based on what they are hearing from front offices. So if all of these players are falling out of the top 10, who is replacing them?

2022 Sophomores and the Rest

The most fascinating thing about this class of sophomores is the meteoric rises that have presented these players. When looking at the top of this class, you have the three freshmen currently in a tier of their own: Jabari Smith Jr., Paolo Banchero, and Chet Holmgren. After those three, however, it is anybody’s game.

Jaden Ivey from Purdue is consistently given that fourth spot and had a bit of buzz after a good freshman year. However, he has answered a lot of the questions about him coming into the year such as his shooting and playmaking. While nobody is shocked by Ivey’s positions on mock drafts, you have a guy like Johnny Davis from Wisconsin who was not even on pre-season boards full stop.

Johnny Davis is one of the guys that has taken the NCAA by storm in his sophomore season and has skyrocketed up draft boards according to draft Twitter and experts alike. The Wisconsin sophomore is the most exciting show in college basketball and putting up statistical fireworks night in and night out while being the Badgers’ only option. This performance from Davis has made him a favorite for the Naismith Player of the Year as well as a top-five pick.

Another statistical superstar in the Big 10 is Keegan Murray from Iowa who has seen an exponentially larger role this year in the absence of Luka Garza and Joe Wieskamp. In that absence, Murray has put up historic advanced metric numbers and has proven himself as a reliable scorer that should translate to the next level. Bennedict Mathurin from Arizona is another player that has taken a leap in his sophomore season. Increasing his scoring from 10 to 18 points a game on his way to leading Arizona to being a top-three team in college basketball.

These sophomore players as well as many others’ stocks are trending up while younger players are just fighting to stay afloat on draft boards. In a weaker draft class, these older players given bigger roles have been able to take advantage of the opportunities presented to them.

While some teams may still feel inclined to take a risk on a high upside freshman, others may prefer a more proven college player with one elite skill like Tari Eason’s defense or Mark Williams’ rim protection. Those players among others have climbed all the way up draft boards from out of nowhere, and their end is nowhere in sight. Those players can find their way to the lottery while Mathurin, Davis, Ivey, and Murray are all near locks.

We could end up with two sophomores in the top five alone and another few following behind them in the top 10. Do not be surprised if these players make up some of the first few picks that Adam Silver makes on draft night. More than that, the rest of the college basketball season will only help these players who are thriving in their roles. Expect to hear a lot of their names in March and again in June as we get ready for draft night.