Sorting Burke and Mudiay’s Futures in a Crowded Backcourt 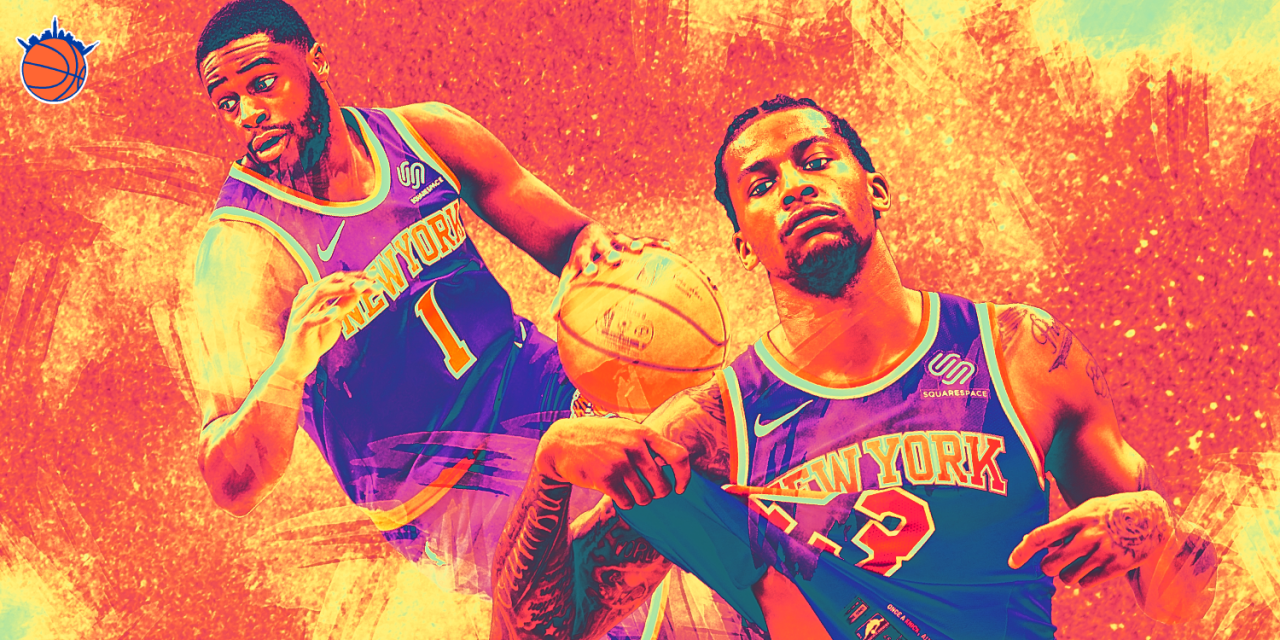 The Knicks’ former lottery picks Emmanuel Mudiay and Trey Burke, both guards, are two question marks going forward. Is there room on the team beyond this season for the reclamation projects?

In the 2015–16 NBA season, the New York Knicks had a point guard rotation that hinged on a 34-year-old Jose Calderon and future-former-Knick Jerian Grant. Today—when healthy—they have three former lottery picks running the offense. How does head coach David Fizdale incorporate everyone into the rotation?

Starting point guard Emmanuel Mudiay was drafted seventh overall by the Denver Nuggets before being shipped to the Knicks. Frank Ntilikina was taken by the Knicks with the eighth pick in last year’s draft, and after a three-game timeout from Fizdale, he’s subsumed the majority of the rest of the minutes at point guard. All it took were injuries to the 2013 ninth-overall pick, Trey Burke, and undrafted—yet nonetheless impressive—rookie Allonzo Trier. Ntilikina sprained his ankle in Charlotte as the injury bug spread but was able to play two days later in Indianapolis.

Burke had become the team’s sixth man and was a change of pace—for better or for worse—until he sprained his knee against the Milwaukee Bucks just over two weeks ago. In four games towards the end of November, Burke was averaging 25.7 points per game, but from the Nov. 23rd win against the New Orleans Pelicans to his injury on Dec. 1st (omitting the 56 seconds he played against Milwaukee), Burke averaged just 8.7 points per game on just 18.9 percent shooting.

Burke also returned to the lineup against Indiana, but the tricky part comes when undrafted rookie Allonzo Trier—who was signed to a two-year $6.8 million deal last week and has been a primary ball handler when playing—returns from his recent hamstring injury.

Complicating matters, Mudiay has been playing by far the best ball of his career. He’s carried them to big wins against New Orleans and Charlotte, where he posted a career-high 34 points while going 14-of-21 from the floor. There’s no way Fizdale takes away his minutes unless things take a drastic turn for the worse—considering how Mudiay’s career has gone to this point, that is unfortunately very possible.

Emmanuel Mudiay scored a career-high 34 points, but his and Noah Vonleh's passing were standouts in the comeback W vs. the Hornets.

Let’s not assume the worst for once. Say Mudiay continues to play well and Ntilikina, Burke, and Trier are all healthy soon—what then? Earlier in the season, Fizdale adjusted to his glut of guards by playing Ntilikina out of position at small forward alongside two other guards. The move frustrated fans, and as of now it’s indeterminable whether the move will have any long-term positive ramifications for Frank.

Ntilikina has the length and versatility to guard most wings, forcing him to stand in the corner while Mudiay, Burke, and Trier pound the ball on offense and impede his development on offense.

Frank is 20 years old—younger than this year’s first-round pick Deandre Ayton—and the Knicks just used the eighth overall pick on him last year. No matter how bad he looked on offense (and yeah, it was really bad), giving up on him as a point guard so early seems counterintuitive if the team’s looking to build for the future.

Since returning from his sabbatical on the bench—which ended three games after Burke’s injury—Ntilikina showed more aggressiveness. The ball was in his hands a lot more, in part a result of their just being fewer healthy bodies to play, but he was also back to playing like he had been earlier in the season. Since the Knicks played the Golden State Warriors and Brooklyn Nets back in October, Ntilikina had just one game with 10 field-goal attempts. In the two games he’s played at least 20 minutes in since returning to the rotation, he’s made a total of 13-of-24 attempts, which includes hitting six of his eight attempts from three.

Shoving Frank back into the corner would contradict Fizdale’s apparent plan to light a fire under Ntilikina by benching him. Fortunately, Fiz appears aware of this, “Right now, yeah. I don’t want to mess with him,” Fizdale told Steve Popper of Newsday.

“He’s just got back into the groove and he played two games back to back well. I always run into that with these guys when it comes to lineup changes and stuff like that. When a guy’s actually playing well in that role, do I want to shift him? So that’s something I’ll always be evaluating, trying to find a balance with.”

So where does that leave the rest of the guards? The Knicks waived Ron Baker in order to sign Trier, who’s more of a combo guard by default because of his habit of getting tunnel vision around the hoop. But at 22 years old, the Knicks will likely want the ball in his hands; he’s under contract for this and next season, so there’s an incentive to develop him. Plus he can straight up score.

Mudiay’s also just 22, but if the Knicks decide not to extend an approximately $5 million qualifying offer to him, he’d be an unrestricted free agent. He’s been the best point guard on the team for the majority of the season, but with Trier locked up for another year, Ntilikina is signed through at least the 2021–22 season if they extend his qualifying offer. With a free-agent crop that includes Kyrie Irving and Kemba Walker to name a few, it’s not likely that the team, through no fault of his own, sees Mudiay as a long-term answer.

Burke just turned 26 last month and is an unrestricted free agent at season’s end. His renaissance with New York has been one of the team’s best storylines over the last two seasons, but his play has still been marred by inconsistency. For every 25+ point game, there’s another where he puts up an inefficient 10 points.

During his benching, rumors of a trade swirled around Ntilikina. Reports that the Orlando Magic and Phoenix Suns were interested in the second-year French point guard surfaced. While they amounted to nothing (at least for the time being), both Mudiay and Burke’s contracts make them candidates to be moved before the deadline.

A good team could get the most value out of Burke by making him a spark plug scorer off the bench. And shipping Mudiay to a team in need of guard help, like San Antonio, could be the best move for all parties involved.

The Spurs have struggled without Dejounte Murray, who tore his ACL before the season started. Both Mudiay and Murray are 6’5”, Muday has a 6’9” wingspan and Murray’s is 6’10.” The Knicks then wouldn’t have to decide between giving Mudiay $5 million next year and chasing some big-name point guards, while also giving the young players under their control more playing time. Plus, the Spurs could cut ties with Mudiay when Murray returns next year, and with all due respect to Fizdale, if Mudiay looks like this under him then imagine what Popovich could do?

Of course, in order to get anything of value, the Knicks have to showcase both players—so how do they do this without neglecting Trier and Ntilikina? Well, Mudiay isn’t going to be taken out of the starting lineup as long as he plays like he has been, and Tim Hardaway Jr.—barring some unforeseen change—isn’t leaving the starting lineup period.

In the 219 minutes that Ntilikina and Trier have shared the floor together, the Knicks have a Net Rating of -17.2. Burke and Ntilikina’s shared NetRtg is -8.6 in 222 minutes together, Burke and Trier’s is -11.1 in 204 minutes, and Mudiay and Trier are -2.6 in 176 minutes. The only positive two-man lineups featuring two out of these four are Ntilikina and Mudiay, at +14.7 (albeit, they’ve only played 26 minutes together). Burke and Mudiay’s NetRtg stands at -0.1 in 53 minutes following Sunday’s Pacers loss (per NBA Stats).

Fizdale has his work cut out for him. If he sticks to his word about trying to keep Ntilikina comfortable in the role he’s been succeeding in, the best solution would be a short leash for Burke. He’s shown that he can shoot a team into, or out of, a game. Burke is in the midst of his sixth season, at this point most teams should have a grasp on what he can and cannot do. All of this does depend on the Knicks looking to trade Burke, but again, they have every incentive to do so. If the team does like him so much that they want to bring him back, nothing would be stopping them from pursuing him in the offseason after seeing what they could get at the deadline.

Mudiay’s situation isn’t as clear-cut—he struggled in Denver, but his heroics have kept New York a half-tier above the league’s worst teams, which could be a good thing or a bad thing depending on who you ask. At 22, it’s possible that he’s turned a corner after years of dreadful point guard play, so the Knicks may be hesitant to ship a lottery-level talent out of town.

Mudiay had a great find here to Kanter for the and-1 opportunity pic.twitter.com/St663BvdKB

Mudiay and Ntilikina should play more minutes together with the ball-handling duties divided between the two of them to see if there’s something there. Burke should be traded—he has more to offer a contender than he does the 9-22 Knicks. Trier should take over his duties a the team’s sixth man and their “go-get-us-a-bucket” specialist.

Finding ways for Ntilikina, Mudiay, and Trier to share the floor will be a challenge but a necessary one—they also have Hardaway, Damyean Dotson, and Courtney Lee on the roster. Lee’s probably the most likely player on the roster to be moved, but he’s played just five games this season due to a neck injury and frankly needs the reps to get back into it.

Both Mudiay and Burke have admirably willed the Knicks to wins this season. Both are former lottery picks that had their careers reanimated in New York, but neither are likely to be on the roster next season. Trading both of them would be the best move for the Knicks’ future and arguably Mudiay and Burke’s present.