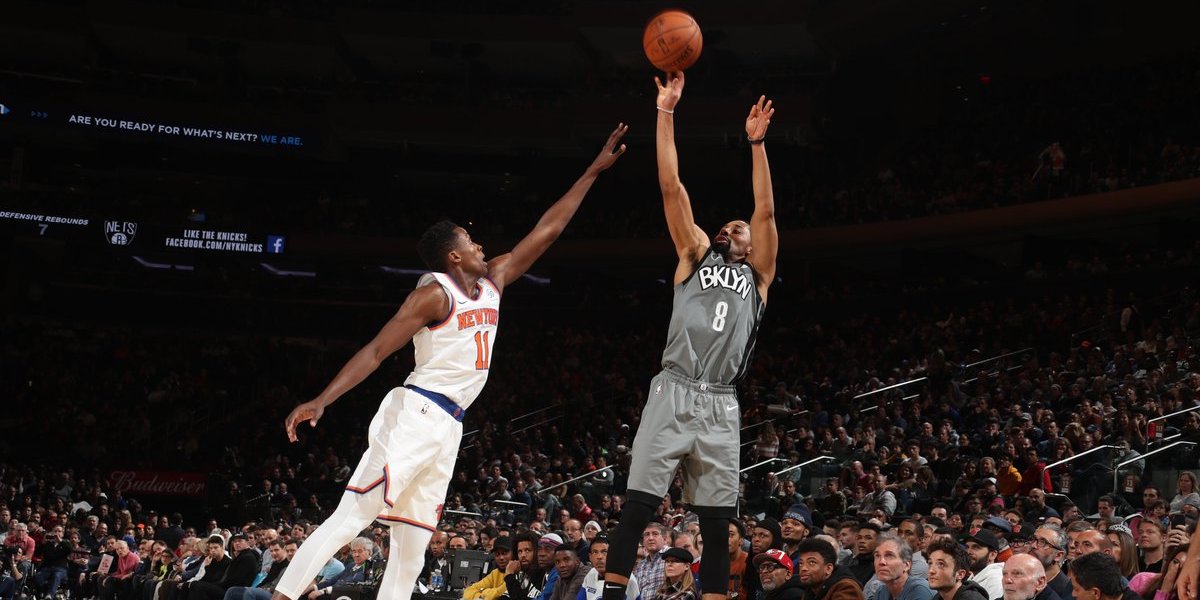 Again the Knicks came out with little energy, perking up a bit in the fourth quarter, but Marcus Morris’ hot shooting wasn’t enough against the Nets.

The New York Knicks (4-13) fell short to their crosstown rivals, the Brooklyn Nets (8-8), 103-101 in a game the Nets were begging the Knicks to steal. Marcus Morris led the way for the Knicks with 26 points but was out-dueled by Spencer Dinwiddie, who finished with a game-high 30.

You can tell right away what type of Knicks team came to play based off the first few minutes. On Saturday it was a low energy start that led to a loss. Tonight the energy was there, but similar problems from the past few games plagued them in the first half: defending the three-point line.

Without Kyrie Irving the Nets will unleash an aerial assault akin to what the Charlotte Hornets do. Knowing this, the Knicks kept guarding for the two instead of the three. The puzzling defensive gameplan helped trigger a 22-3 Nets run towards the end of the first quarter, which featured a ton of (open) threes.

Things improved in the second. The Knicks used the three-ball to erase their deficit, and briefly take the lead, before the Nets took control back. David Fizdale’s bunch had no answer for Spencer Dinwiddie (19 first-half points), as he did whatever he pleased leading the Nets to a 52-46 lead at the break.

Morris tried his best to wake his team up. Morris kickstarted the offense on his own with sharpshooting from three that helped tie the game up at 61-61. The Nets eventually wrestled the lead back up to 10 entering the fourth.

Most of the fourth was a continuation of the whole game; the Knicks outshot and out-rebounded the Nets, yet Brooklyn maintained the lead with timely buckets. Morris caught fire from deep late once again, but it was not enough. The Knicks could not hit the shot.

Fizdale continues to dig his own grave with odd decisions. Instead of starting Wayne Ellington, Allonzo Trier, or Damyean Dotson for R.J. Barrett, who was out with an illness, he decided to give Kevin Knox the nod—something Knox learned at the last minute.

Knox said he had no idea until just now that he was starting – or who he’d be lined up against.

The move did not go well.

Knox looked out of place, which is understandable for someone who had settled into his consistent role with the second unit. Knox had moments but overall looked like a guy who’s whole routine was thrown out of whack. Fizdale not only took him out of that second unit but doubled down by playing him out of position.

This was the exact game in which you use Trier. Like Barrett he can create his own shot, and has a special skill to be able to play well without having to warm up. If not Trier, Ellington, Dotson, or even Dennis Smith Jr. would have been wiser moves.

Over their last five games, not including tonight, opponents have shot 38.3% from three against the Knicks. The worst part is Fizdale is aware, and doesn’t seem to mind because his chief objective is to protect the paint. The Nets took advantage of the Knicks guarding for the two by unloading from three.

In the first half alone Brooklyn launched 25 threes, hitting on nine of them. They finished with 38 attempts, 50% of their total shots.

Too many of those attempts were wide open, or loosely contested. Rarely, if at all, did the Knicks force anyone inside the arc.

This has been an all too common sight:

This is routine, fyi pic.twitter.com/FIBDN5C0hF

If you think poorly defending the three is not that big of a deal, take into account that the Knicks outshot the Nets, both from deep and from the field, and out-rebounded them—yet lost because the Nets simply shot more threes.

This was the best source of offense for the Knicks. Marcus Morris was so close to carrying the Knicks to the win, and continued an intriguing trend. He might be farsighted.

The Knicks travel to Toronto for a Thanksgiving Eve showdown with the Raptors.