Starting or Not, Immanuel Quickley Gives the Knicks Promise at Point Guard 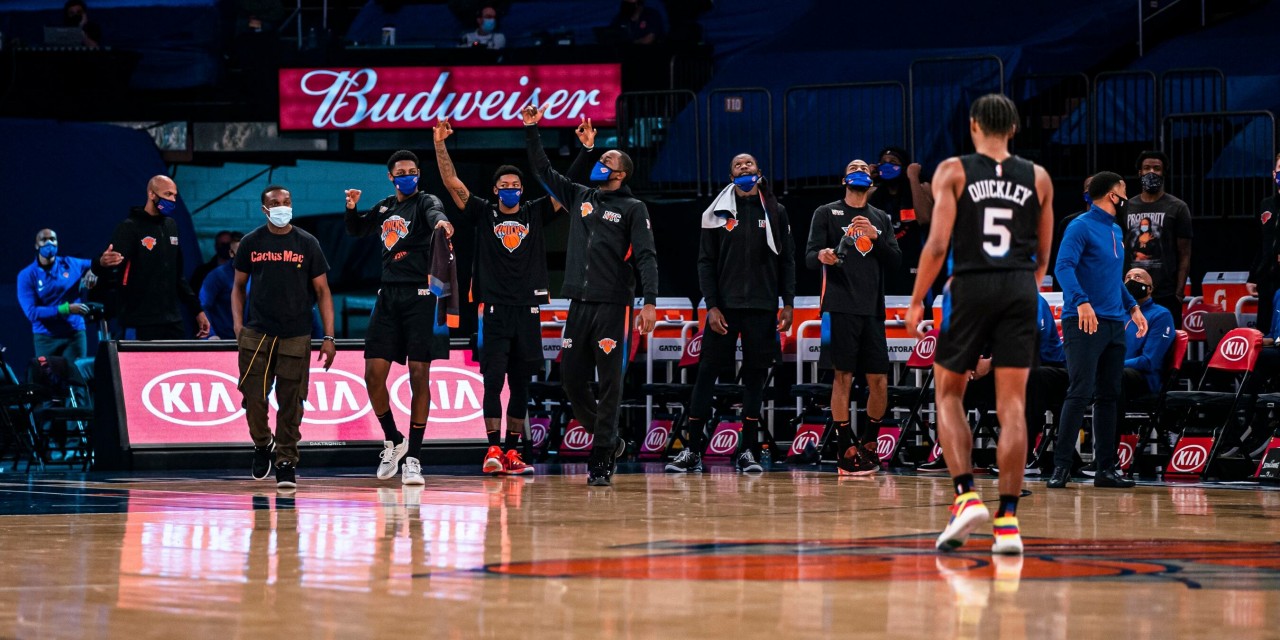 With a team-leading 25 points on Friday in the win over the Cavs, Immanuel Quickley has continued to push the conversation around the Knicks point guard.

NEW YORK — Rookie point guard Immanuel Quickley scored 25 points in 25 minutes, leading all scorers in a 102-81 New York Knicks win over the Cleveland Cavaliers on Friday night. The win snapped a three-game losing streak for the Knicks. Quickley’s performance included 14 points in the fourth quarter while shooting 9-of-17 from the field and 5-for-8 from three for the game.

The conversation amongst Knick fans in recent days has been that Quickley should start at point guard over veteran Elfrid Payton. While Quickley outscored Payton by 23 points on Friday night and played two more minutes, Knicks head coach Tom Thibodeau remained noncommittal on a change to the starting lineup.

“Because someone doesn’t start, that’s really not important to me,” Thibodeau stated in the postgame press conference. “It’s having groups that play well together, and you can always finish with the people that you feel will give you the best chance to win the game.”

After Friday’s game, Quickley is averaging 11.6 points in just 18.5 minutes per game. The 25th overall pick is also shooting 37.9% from deep on 4.1 attempts a game, and 22.5 points per 36 minutes. He’s also scored 25 or more points in two of his last three games, and has played the same number of minutes—or more—than Payton in those three games.

“We’re always looking at different lineups and what works best and how guys complement each other, so he’s (Quickley) going to have a significant role, but we need everyone,” Thibodeau added. “So tonight was his night, tomorrow night could be someone else’s.”

Based on what Thibodeau said, it sounds like we may not see Quickley in the starting lineup anytime soon. That being said, that doesn’t mean that it won’t happen this season, and that doesn’t mean Payton is going to play more minutes than him. The season is only 20 games in. There’s still a decent chance that Quickley will eventually start.

Additionally, Quickley complements R.J. Barrett perfectly. With Quickley’s shooting ability, Barrett is getting plenty more spacing on the floor than he has with Payton sharing a backcourt. With Payton on the court, teams have been frequently dropping into zone defense due to the minimal threat of the point guard to shoot from behind the arc. That doesn’t work with Quickley, and it allows Barrett to thrive.

According to NBA.com, the two-man lineup of Quickley and Barrett in 158 minutes has a Net Rating (NetRtg) of +11.0, and an Offensive Rating (ORtg) of 110.4, while in 517 minutes the two-man lineup of Payton and Barrett has a NetRtg of +0.8 and an ORtg of 105.5. Granted, Barrett isn’t an easy player to build around with his skill set, but based on these stats, it’s clear the Quickley fits well next to him. Barrett scored 24 points in Friday’s game.

LOVE possessions where RJ gets the board and is able to get downhill pic.twitter.com/37CuDQ24gz

“I’ve asked probably 10 NBA players before the season started, give me three things that they have learned, and one of them was just the NBA season is big on ups and downs,” Quickley said. “You’re going to have great games. You’re going to have games where you don’t play as well, but the main thing is just to try and stay grounded.”

“As a rookie, I don’t think there’s a better coach I could have had.” – Quickley talking about how important Thibodeau is to learning defense

One thing is for certain: Immanuel Quickley’s play and mentality is one of a veteran, not a rookie. Whether he starts or not, the Knicks could be in good hands at the point guard position for the future.