Starting or Sitting: What Do the Knicks Do With Their Veterans? 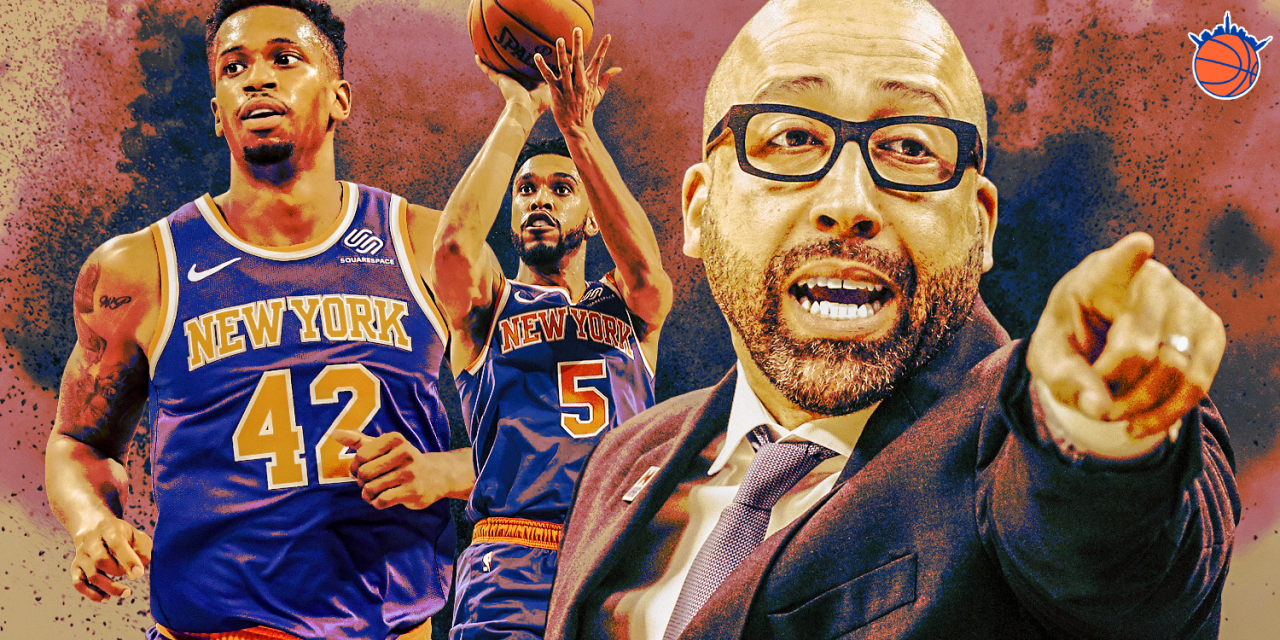 The Knicks have a team largely devoid of older players, but the insistence of their veterans puts the development of the young core in jeopardy.

While most of these players, other than perhaps Lee and Thomas, don’t necessarily fit the mold of your prototypical veteran, they still have one thing in common that could be considered detrimental to the team—they’re taking away much-needed developmental time to the Knicks’ young players.

David Fizdale has done plenty of admirable things as the Knicks head coach—including giving his young players a taste of some of his “tough love” ideology—it has been frustrating to watch him play some of his veterans, many of which don’t appear to have a future in New York, over some of his young talent.

This is somewhat of a juxtaposition to what I’ve spoken about in the past—Fizdale has implemented a “meritocracy” of sorts when it comes to his lineups, which is to be admired. However, some of his merit-based lineups don’t have the Knicks’ future at hand.

But like his predecessor Jeff Hornacek, Fizdale is in a somewhat precarious spot. In a sense, he needs to play his veterans. But unlike Hornacek, it’s not a fight for short-term victories and job security.

It’s for the greater build of the rebuild. But just how long can it last?

Recently, per the Daily News, a rival coach expressed utter confusion at the Knicks’ lineups—mostly, their propensity to play veterans that don’t necessarily jive with the rebuilding process.

For all intents and purposes, let’s not consider Emmanuel Mudiay and Noah Vonleh Knicks “veterans.” They’re still relatively young, at 22 and 23, respectively, and have earned their spots in the starting lineups.

It’s the other veterans—Hardaway Jr., Kanter, Lee, Hezonja, and Burke, who are the ones that continue to earn heavy minutes, at the expense of the Knicks’ younger players.

Hezonja, for the most part, has fallen out of the rotation entirely, and for good measure. For the season, he’s averaging 7.0 points on 39 percent shooting and 29.8 percent from behind the arc, 3.1 rebounds, and a ghastly 0.9 assists. For someone who was brought in to be a “point forward” of sorts, that last number is just flat out unacceptable. Fizdale gave him a shot at playing time, but he was just unable to sustain any type of rhythm offensively. Although one could argue the Knicks were actually playing their best basketball when he was in the starting lineup, that seems to be more coincidental than anything.

Fizdale made the right choice with Super Mario: benching him for Kevin Knox. Hezonja was a low-risk signing that was far from a guarantee to stay in New York past this season, and his fate all but looks sealed—he won’t be a Knick next season.

Fizdale might have done the prudent thing with Hezonja, but he’s in a much more difficult spot with some of the others—Lee, Hardaway Jr., and Kanter, to name a few.

Lance Thomas, again, is never one to complain, and despite starting the season in the starting lineup, he has ridden the pine two out of the last three games, playing a grand total of seven minutes and scoring just two points. With a relatively small contract and the ego to match, he’s far from an issue for David Fizdale and his rotations. He seems more than happy to play the “mentor role” for this young Knicks team. More so, he seems to be elated just have a place to call home. He needs to continue to mentor from the sidelines—where he belongs at this point in this lost season (or “won” season, depending on where the Knicks end up drafting). As for his future, he’s owed $7.5 million next year, but only $1 million of which is guaranteed. Consider him all but waived, but I think I speak for some Knicks fans that would like to see him re-signed for the veteran minimum.

Then there’s Trey Burke—someone who broke out last year for New York, but it’s clear he’s not a mainstay of the franchise for years to come. That hasn’t really deterred Fiz from playing him on occasion, but like Thomas, he has also played uneven minutes since returning from injury. He’s played in just five of nine games since his return from injury, and really, has only had one decent game, putting up 12 points in eight minutes during a 129-97 shellacking to the Utah Jazz.

Burke, however, is also on a cheap contract and doesn’t appear to factor into the Knicks’ long-term plans, so his yo-yo playing time isn’t that much of an issue. But for the majority of Knicks’ fans who want to see Frank Ntilikina gobble up his minutes at the point guard slot; sitting, or even waiving Burke seems like the prudent thing to do for the Knicks. It’s not his attitude, his contract, or even his skill set that’s the issue. It’s simply this Knicks team’s current trajectory. But hey, every team needs a third point guard, and Burke could fill that spot admirably. Especially when you factor in Ntilikina’s latest injury.

Things get a bit trickier when we start talking about the Knicks’ higher-priced veterans—Kanter, Lee, and of course, Hardaway Jr. The best situation for the Knicks would be to find trading partners for Kanter’s bloated contract, but that seems next to impossible. The Knicks look like a far better, not to mention, more modern team with second-year big Luke Kornet manning the middle, and the looming return of Mitchell Robinson only makes things that much more difficult for the Turkish dissident. If the Knicks want to up Kanter’s trade value—then, by all means, do it. Trot him out there for 36 minutes a game, let him get empty 20-10 numbers, and then try to ship him off for another expiring contract and maybe a second-round pick.

If not, then the Knicks need to make the decision to outright waive him and let Kornet, Robinson, and even Vonleh get the bulk of the minutes at the 5. The Knicks’ best shot at trading Kanter would be to the Bulls, presumably for former lottery bust Jabari Parker. He could serve as their latest “reclamation project,” so to speak. If the Knicks don’t think they can get anything for Kanter, however, they should just pull the plug and waive him ASAP.

Courtney Lee presents a similarly difficult situation. Should the Knicks play their veteran guard to drive up his trade value ahead of the deadline? Or should they just sit Lee in favor of guys like Ntilikina, Dotson, and Trier? When he first returned, it appeared that the former was the plan, but as of late, it’s the latter.

Fizdale has opted to bench Lee the last couple of games. Lee still has value for a veteran team, but his most attractive skill set—his ability to hit the three-pointer—has faltered. Lee is only shooting 33 percent from three, which would stand to be the lowest mark of his career. What’s even more flabbergasting is his is free throw shooting, which has been a paltry 66.7 percent—also by far the worst of his career. His two biggest strengths have become weaknesses, yet the only way to reverse course and drive his value back up would be to keep playing the veteran until he gets his legs back.

Unlike Kanter, Lee’s 3-and-D skill set fits a modern NBA team, but at this point, it’s just a matter of him actually showcasing his skills, rather than hurting his value with dud after dud of a game. It might be a double-edged sword, but unless the Knicks want to eat another huge contract from the Phil Jackson era, playing Lee might actually be the best course here. Let him get into a flow, and then try to trade him to a contender when his value is at the absolute highest.

What to Do the Knicks Do With the $72 Million Man?

This is kind of the elephant in the room many Knicks fans don’t seem to talk about, mostly because of his contract situation and the fact that he’s been thrust into the unfamiliar role of number one option on offense. But if the Knicks are to eventually become players in free agency (something that is no longer a given for next offseason), unloading Hardaway’s contract is a must.

Even in the interim, Hardaway has made life just a bit more difficult for Fiz. For starters, he’s virtually non-existent on defense. This could be expected, considering the offensive load he’s forced to handle on a nightly basis. Regardless, Hardaway fights through a screen about as often as Kanye West talks in the first person.

Fizdale is basically forced into starting Hardaway on a nightly basis, not only because of his contract, but because he, realistically, is one of the only Knicks who is capable of generating his own offense. In an ideal world, Hardaway would be a great sixth man, but this isn’t an ideal world, and there is no way the Knicks are bringing someone making that kind of dough off of the bench.

But it’s not like Hardaway has been THAT awful. Dealing with bouts of plantar fasciitis, THJ is averaging 20.6 points on 39.4 percent shooting (gross), 34.9 percent from three, 3.4 rebounds, a career-high 2.9 assists, and one steal (per Basketball-Reference). Again, not great, but not horrendous.

The problem is the Knicks have younger players that can, collectively, do a better job at the 2 guard than Hardaway. Or, at least, they can in the near future. Allonzo Trier is an isolation player who can get his own buckets like Timmy, only he defends the perimeter with similar little gusto. Damyean Dotson is a prototypical 3-and-D player who doesn’t need constant touches to be effective. He’s almost got a little Klay Thompson ability in him, dare I say. Frank also looks like he might be destined to play the 2 guard as well, but again, that can only be determined if he gets the necessary playing time at both guard positions, but that’s something that hasn’t happened nearly enough this season, mostly because of the Knicks veterans ahead of him.

But the Knicks are glued to Hardaway at the hip for the moment, because, let’s face it— they’re already unlikely to find a trade partner for him now, so just imagine how difficult it would be with him rotting on the bench? Coach Fizdale and the Knicks are certainly in a precarious spot with their veterans, and there really is no right or wrong answer on what to do about it. Cutting bait with guys like Kanter, Lee, Burke, and Hardaway could certainly be viewed as a solid start, but the only way to get to that point is actually playing them.

It’s like that Fat Bastard quote from Austin Powers, “I eat because I’m unhappy, and I’m unhappy because I eat.” Only this time it’s, “the Knicks have to trade their veterans to play the youngsters, but to trade them, they have to play.”