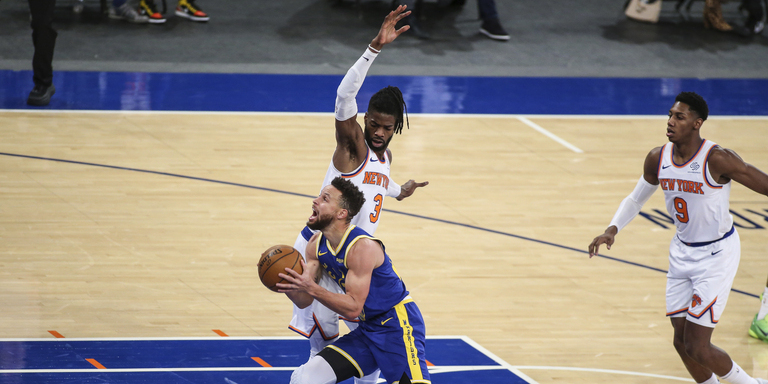 Stephen Curry had his fun to the tune of 37 points as newly minted fellow All-Star Julius Randle and the Knicks couldn’t handle the Warriors.

It was a special night at Madison Square Garden for a few reasons. Fans returned to the Garden for the first time in nearly a year and Julius Randle was named to his first All-Star team, giving the New York Knicks (15-17) their first representative in three years.

But if you thought this night would have a perfect ending, you have not been paying attention.

Randle picked up right where he left off when there were no fans in the stands, guiding his team through an early storm of three-pointers. The Golden State Warriors (17-15) made it abundantly clear immediately that they will take as many shots from beyond the arc as they can, hitting 6-of-11 from deep to grab a 36-31 lead after one. Derrick Rose and the bench mob grabbed the reins while the Warriors cooled off from deep to take a 59-55 lead into the locker room at halftime.

The Knicks came out of the half very flat and Curry did what he typically does in third quarters—devastate opponents. The result was an ugly quarter that put the Knicks in a double-digit hole heading into the fourth.

A cold spell from the Warriors and a late push from the Knicks made for a tight game down the stretch. Randle tied the game up at 97-97 all before the Warriors pulled away one final time. Timely defense from Draymond Green, clutch shooting from Curry, poor outside shooting by the Knicks, and perplexing officiating sealed this one. The final score: 114-106, dropping the Knicks to two games under .500 and 8-7 on home turf (0-1 with fans, if you want to get technical).

The Knicks brought out all the stops to celebrate Randle making the All-Star team. The pregame festivities, the special message from his mother, and the MVP chants from the Garden faithful—there was not much more Randle could have asked for other than a win.

Curry and Green saw to it that Randle’s night would not be perfect. They were not able to prevent another strong individual outing, however; Randle scored 25 points, pulled down 10 rebounds, and dished out seven assists in the losing effort.

His night though ended with an ejection, but there was nothing that was going to wipe a smile off Randle’s face tonight.

Julius Randle just got ejected and he loves it LMAO @J30_RANDLE pic.twitter.com/iyConPYCN1

Allow Me to Reintroduce Myself

Derrick Rose reintroduced himself to the Knicks fans in an empathic fashion. His 12 points and six assists in 12 minutes turned the tide in the first half, helping the Knicks head into the locker room with a lead.

In a perplexing move by Thibodeau, Rose did not see the court again until the fourth quarter. He finished with 16 points and did help lead a fourth-quarter comeback effort, but it feels like he could have done a little more if Thibodeau had given him extra minutes.

The hometown Toppin had a perfect shooting night in limited minutes, scoring seven points on 3-of-3 in 13 minutes. Quickley did not fare as well, scoring three points on 1-for-5 shooting in his 13 minutes.

The Third Quarter Knicks came out tonight and that, combined with Thibodeau’s laissez-faire, approach made for a perfect storm. The Warriors jumped out to a 23-8 run before Thibodeau decided to make a switch. This is not a one-off either; Thibodeau has been steadfastly stubborn when it comes to playing the starters in the third quarter.

Thibodeau’s reluctance usually costs the team, but tonight the poor decision was amplified from a vintage third-quarter performance from Stephen Curry, scoring 15 points. The Warriors scored 39 points in the quarter, and it truly could have been avoidable if Thibodeau did anything.

The Knicks will try to get back in the win column Thursday night against the Sacramento Kings at Madison Square Garden.

»READ: Tom Thibodeau, Knicks react to win over Wolves with fans on their way