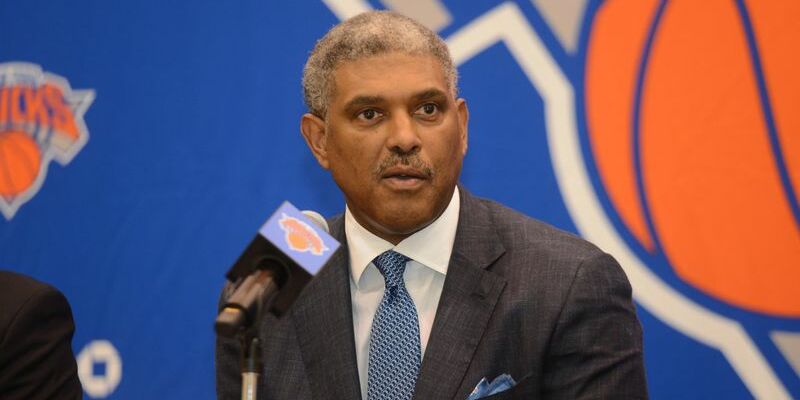 Knicks executive Steve Mills has thrived in the front office despite the franchise’s steady decline and losing ways. It’s time for a change.

Following a blowout loss to the Cleveland Cavaliers that dropped the team to 2-8, Steve Mills and Scott Perry met with the media to voice the displeasure of the New York Knicks’ top brass. They were sent out on James Dolan’s orders, meaning the presser was more a warning shot than a genuine message.

This season was supposed to be a step in the right direction. Instead it has been a side shuffle at best, step backward at worst.

Naturally, when a team dishes out $70 million worth of contracts and goes on to lose eight of its first 10 games, the blame games begin. There are a few players in this year’s edition of the blame game.

The big signing of the summer, Julius Randle, has been an abject failure through 10 games. Every other signing has failed to significantly complement the young core, or contribute to winning ball games.

The blame for that, for now, has rested on head coach David Fizdale. A month into his second season, Fizdale has yet to show any semblance of a system or consistent rotation. Once again, he insists on playing guys who will not be here next season, most notably Bobby Portis, often at the expense of the young core. Fizdale is not completely innocent, but it’s hard to fault him for the poor roster construction.

Enter Perry, who has once again filled the roster out with pieces that don’t fit, and brought in a failed draft pick from a prior job to go along with similar skills sets, none of which contribute to winning games. The team signed three power forwards who more or less do the same thing, and failed to sign a legitimate backup center, opting for Portis over re-signing undrafted find Luke Kornet for significantly more money.

All of these guys have played a role in the Knicks’ slow start, but they are not the root of the problem. There is a commonality between Perry, Fizdale, and any free agent signing you choose to play: they have only been here for two years or less.

One guy I did not mention, who has been a constant presence over the near two-decade albatross, is President Steve Mills.

Mills’ greatest skill is self-preservation. He has remained out of the firing line the duration of his MSG tenure despite being the constant variable in just about everything that has gone wrong since the turn of the millennium.

He first arrived on the business side of MSG in 2003, serving as COO and Sports Business President. His most notable move was hiring Isiah Thomas as President of Basketball Operations. The Thomas era was a dumpster fire. Mills left in 2009 following the Thomas sexual harassment fiasco, before resurfacing in 2013. During this four-year hiatus the Knicks had the best stretch of success, culminating with the 54-win 2012–13 team.

Mills replaced the man who built that team, Glen Grunwald, as general manager, and oversaw a steady decline to the basement of the Eastern Conference since then.

The key to the success of Mills’ self-preservation is his ability to insulate himself with fall guys. Following an overall poor 2013–14 season it was Mike Woodson. Mills handed the keys over to Phil Jackson as team president, who then cleaned house with the coaching staff, and was given full reign from James Dolan, though Mills was kept on as Jackson’s GM.

Overall the Jackson era was a mixed bag. The with the high (selecting the diamond in the rough, Porzingis) heavily outweighed by the lows (forcing the Triangle on unwilling players, an ugly public feud with Carmelo Anthony, and planting the seeds of Porzingis’ distrust with the organization). Jackson and the Knicks “mutually agreed to part ways” six days after the 2017 draft, and Mills was not only kept on, but promoted to team president despite being an integral part of Jackson’s failed regime.

In his Monday column, Stefan Bondy of the New York Daily News pulled an interesting Jeanie Buss quote from The Athletic. Referring to Jackson’s Knicks tenure, Buss said “(Jackson) should’ve made sure (to control) who was surrounding him, because the people close to you will take the knife and put it in your back.” Mills’ survival makes it likely he threw Phil under the bus, or simply didn’t back him.

Before Mills hired Perry as his new GM, he kicked off free agency by pissing away $80 million. First he signed Tim Hardaway Jr. to a ludicrous $71 million contract, and then re-signed Ron Baker to a two-year, $8.9 million deal. To get a sense of how bizarre (and stupid) the Hardaway contract was, even Hardaway was surprised by the offer.

Perry coming on board gave the team some stability, but there was still the matter of Porzingis. As I mentioned when I wrote about the botched Porzingis deal last week, Porzingis’ issue with the team was not exclusive to Jackson; his doubts about the Knicks building a winning culture extended to everyone involved.

David Fizdale’s trip to Latvia did not smooth things over. Mills and Perry not offering Porzingis an extension, angling for more cap space for the 2019 free agent class, must have perturbed KP as well.

Which brings us to the seminal moment of Mills’ basketball executive career, and a move that should be the root of his demise: the Porzingis trade.

No matter what side of the fence you are on in the Porzingis star player argument, there is no debate that he was the best homegrown player since Ewing and was an attractive enough piece to lure legitimate coaching candidates.

Fizdale chose New York over Atlanta, Phoenix, and Charlotte for the chance to coach Porzingis. We will never know what players Porzingis could have attracted because Mills blew whatever cap space the Knicks had on Hardaway, then traded him.

The trade initially presented was a smart move. The rumor was Porzingis wanted out, threatening to take the qualifying offer, and the Knicks had received a heads up that their luck in free agency was a lock to change.

10 months later, we now know that Porzingis did indeed ask for a trade; however, his desire to leave was overstated. According to SNY’s Ian Begley, Porzingis remained committed to New York weeks prior to the now infamous five-minute meeting. The haste in which a deal was reached left many around the league puzzled—and for good reason.

The Knicks held all the leverage, and could have waited until the summer to honor Porzingis’ request, if the summer went as Mills and company had expected. The Nets did this exact thing with D’Angelo Russell trading him after securing Kevin Durant and Kyrie Irving. Shipping KP out in January ruined a legitimate pivot if Durant chose to sign elsewhere.

What that trade did do was erase Mills’ past mistake (Hardaway signing), and put him all-in on having the last laugh in the summer of 2019. Dennis Smith Jr. or the 2021 unprotected pick were never the centerpiece of the trade; Durant and Irving were. To put that much trust into two of the league’s biggest enigmas is akin to throwing your life savings on the roulette table and allowing fate to decide.

Fate was not kind, and now Mills has backed himself into a corner. He and Perry’s “pivot” was to sign a slew of role players with the $70 million they were supposed to use on Durant and Irving. The early returns have been ugly, a 2-8 record, but once again Mills has his fall guy ready.

Fizdale is the first man up. ESPN reported that Mills has already laid the groundwork for the “eventual” dismissal of Fizdale. Should that plan come to fruition, that would be the fifth head coach under Mills to be shown the door, and another sunken cost for Dolan to compensate (Fizdale has two and a half years left on his contract).

Things will not change if Fizdale is removed, either. Not even Gregg Popovich can squeeze 40 wins out of this current roster. The next coach’s failure would then leave Perry as the odd man out, and on it goes.

At a certain point even Dolan will have to smarten up. Since Mills has been involved in basketball operations the Knicks are 165-337. The team’s highest win total for a season is 37.

But there is a simple fix: Fire Mills. If Dolan is not going to sell, and wants to leave any sort of legacy, he must uproot the whole damn thing and clean house. Show Mills the door, and hand complete control over to a brilliant basketball mind. No more minions like Mills as his eyes and ears—complete control over every basketball decision.

The good news is that Dolan may already be on that path. That abrupt presser wasn’t just a message to Fizdale, everyone is on notice. If the rumors are true, Dolan has his eyes on Toronto’s Masai Ujiri. Another name that can be of interest, and much more attainable given his current situation, is Houston’s Daryl Morey. But none of these guys are coming to answer to anyone.

New culture was the phrase of the summer, and it turned out to be a lie. The Knicks are exactly what they were last year, the year before, and five years before that. In order to truly change the culture, New York needs a clean sweep, and Steve Mills should be the first to go.