Steve Mills’ Knicks Tenure Is Over. What’s His Legacy? 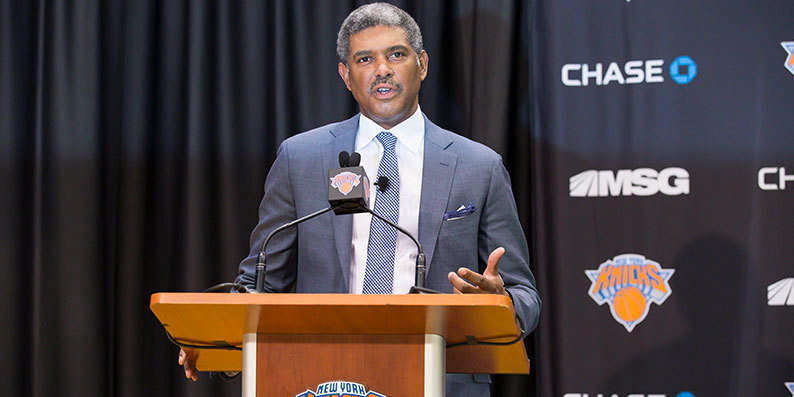 Part of the reason Steve Mills was able to thrive with the Knicks organization is what made the team so terrible for years during his tenure.

Steve Mills’ profile on NBA.com states the following: “Immediately upon his appointment as president, he charted a bold long-range course designed to restore the Knicks to elite status.” “Elite status” harkens visions of pre-boarding an airplane, booking a penthouse suite, and being on a first-name basis with a doorman named Neil. The Knicks’ status reminds me of Andy Dufresne crawling through 500 yards of human feces to save himself in Shawshank Redemption.

The course that Mills charted for the Knicks has been both bolder and longer than many anticipated, leaving the Knicks perhaps further from “elite status” than any other organization in the NBA. Longer still is the Mills’ love story with the Knicks organization, a match seemingly made in hell. How Mills happened into his former role with his Knicks is quite interesting, as there are several pronounced stains on his professional basketball resume. That he not only survived some of his mistakes but actually bolstered his position within the Knicks over the last two decades despite no sustainable success spoke to his ability to keep the big boss off his back. But he could only outrun his mistakes for so long, as Adrian Wojnarowski reported today that Mills was dismissed on Tuesday.

Mills’ tenure with the Knicks can be broken down into three eras: 2000–09 when Mills was President and COO of MSG Sports; 2013–17 while Mills presided over the team as general manager; and 2017 until today with Mills fulfilling the role of team president. At the root of each era: a keen ability to establish protective relationships, shielding Mills from what would likely ruin a less cunning person’s career.

One year of professional basketball in Ecuador (for a league that has seen better days), a few years working for what is now JPMorgan Chase, and 16 years on the inside of the NBA convinced James Dolan to hand the reigns of MSG Sports to Steve Mills, who was brought on as President and COO in 2000. The Knicks’ 2000–01 season was the only Knicks team that decade which would finish over .500.

After a few more stale years, Mills was charged with bringing in the next President of Basketball Operations for the Knicks. He engaged the services of Magic Johnson Enterprises to search for a candidate and landed on Isiah Thomas. What followed was utter humiliation for the Knicks franchise, highlighted by a brawl that Thomas allegedly had a hand in and a horrid sexual-harassment trial where the Knicks paid over $11 million in settlements and Mills testified on Thomas’ behalf. Given that both Thomas and the defendant in the sexual harassment reported directly to Mills and the trial cost the Knicks untold amounts of negative PR, one would deduce that Mills would be on the chopping block. Instead, he simply lost his tie to the basketball side of MSG sports, a slight demotion.

This led to Mills choosing to leave the Knicks in 2009, marking both the end of his first era with the Knicks and the only time he would spend away from the Knicks since the turn of the century. It is important to note that Mills had provided about as much positive value to the Knicks in this stint as the person who is “guarding” the New York City subway stops does (read: no positive value; also read: the person “guarding” an NYC subway stop). Having faced negative consequences from the highest up at MSG, Mills leveraged a different relationship: Magic Johnson Enterprises. Using an “I-scratch-your-back” career pivot, Mills was put in charge of a subsidiary of Magic Johnson Enterprises called “Athletes & Entertainers Wealth Management Group, LLC.” Despite extensive internet research, I have been able to find little out about this company outside of the fact that Mills worked there. It is noticeably missing from the “Our History” page on the Magic Johnson Enterprises website.

Regardless of what happened to that company, Mills was able to leverage a relationship with an extremely influential figure to get him out of a tricky spot. If from 2009–13 people thought that Mills had burnt his bridges and/or MSG skybridges at The World’s Most Famous arena, they had a rude awakening the morning of September 26, 2013, when the Knicks announced Mills would be returning as GM. What Mills had shown between leaving the organization somewhat disgracefully in 2009 until returning in 2013 with a promotion is a mystery on par with *insert any other action the Knicks have taken this century here.*

James Dolan had the following to say about the hiring: “[Mills is] a well-respected sports executive with a strong background in basketball, as well as a familiarity with NBA operations and our company.” There are three claims Dolan makes in that sentence, two of which can be easily refuted. At the time, was Mills considered a “well-respected sports executive,” or did the Isiah Thomas debacle mar his image? What did we see in his first tenure with the Knicks that demonstrated “a strong background in basketball”? That Mills had familiarity with how things were done at MSG is of no doubt, but most would argue that is no reason to hire anyone to an NBA job.

Mills was brought back into the Knicks following three straight playoff appearances, capped by the organization’s best start-to-finish season since the Eastern Conference Finals run of the 1999–00 season. Phil Jackson will ultimately take the blame for what happened between 2014–17, and deservedly so. Mills watched Jackson crumble, and Jackson felt that he “never had full support from his general manager.” With Dolan having taken the lead on Jackson’s hire, Mills was absolved from blame during that time. After all that, he proved to be Dolan’s man through and through, and accepted the President of Basketball Operations job in 2017. Mills had little-to-no tangible value to show for his then 13 years with the Knicks, but he was consistently taking on larger positions in the organization. One can only refer to this sort of behavior as cronyism within the Knicks franchise.

I like to use the following photo, which detail the three of the first five transactions Mills made as the Knicks’ president, to scare small children on Halloween:

You probably know most of the rest of the story. Mills sent Porzingis to Dallas to get two future first-round picks from a team on the rise and the cap space to sign Randle, Portis, Gibson, and Morris Sr. Since the 2000–01 season, Mills has presided over zero winning Knicks seasons. After this summer, the firing felt inevitable. Dolan was embarrassed that no big stars were brought in after he went on the radio to claim they were coming. He demanded results and wanted accountability from Mills. The 10-game presser showed that Dolan was upset with the way things went. Eventually, Mills could only keep the big boss off his back for so long.