Steve Mills Pumps Brakes on 2019, Controls Narrative Before the Summer 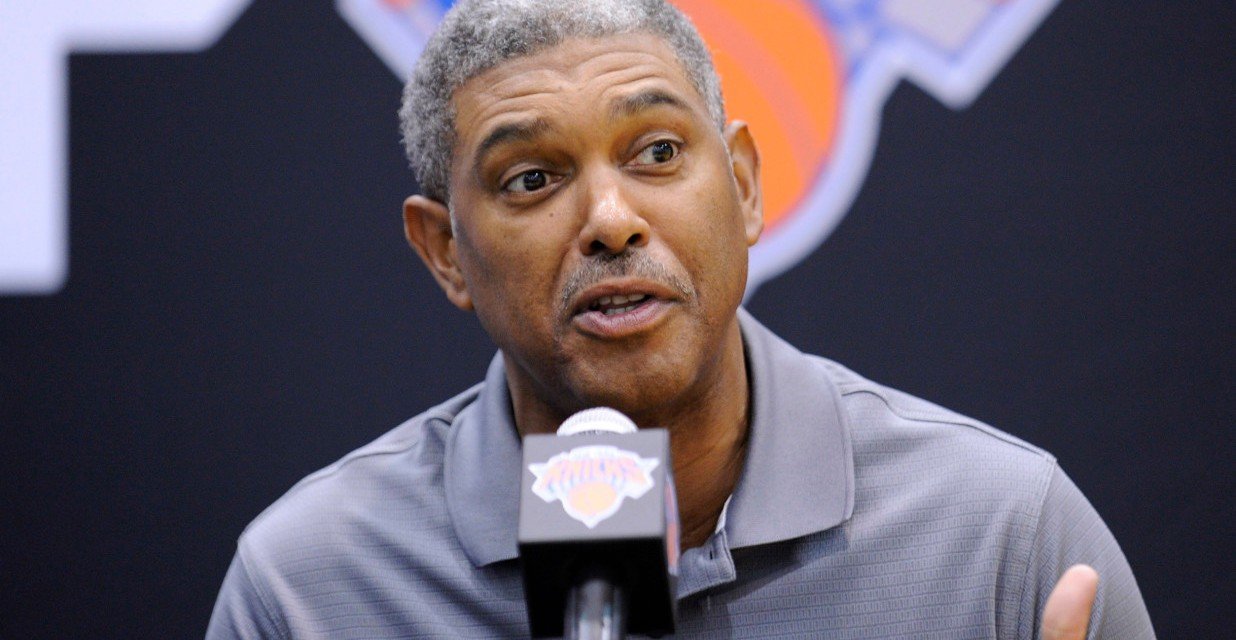 Following a Kristaps Porzingis medical update, Steve Mills cautioned the media that 2019 may not be the do-or-die free-agent summer class for which the Knicks were originally aiming toward.

When Steve Mills met with the media on Friday he controlled the narrative.

The New York Knicks president downplayed the need to make a major move next summer. Instead, Mills said, they want to continue to build up the culture and young players, including Kristaps Porzingis.

“If we don’t make this a place the guys internally feel something good is happening and believe in what we’re doing, that’s not going to be attractive to people who are on the outside,’’ Mills told reporters. “Our guys have to feel it and then they [free agents] have to hear about it and see it in how our guys are interacting with us. The plan is that we develop an environment that free agents should want to be here.” (via NY Post)

This is a level-headed approach that should have been taken long before Friday, assuming they are actually pumping the brakes on 2019.

Joakim Noah was hastily cut before the season to create a max slot for upcoming July. Their top priority for the trade season is to move Courtney Lee’s two-year deal and Enes Kanter’s expiring deal—moves you look into if you have your eyes set on the immediate future.

There is little doubt Mills wants to make a splash. He even mentioned a master plan exists if Kevin Durant does indeed want to come. “We are in a position if we need to find a slot for a max salary we can do that.”

According to Marc Berman, those tentative plans include opening up $38 million in cap space. Without going into further detail, attaching a protected pick with maybe Tim Hardaway Jr.’s contract could be among New York’s options.

But remember, this all hinges on a miracle.

The good news is the Knicks are finally planning in reality and not fantasy. It has always made more sense to bottom out this year, pray like hell you get Duke studs Zion Williamson or R.J. Barrett, and make the young core even more enticing to potential free agents.

Kevin Durant plays with the second best point guard of all time, on the best team of all time, with no threat to knock them off their throne. He may eventually leave, but not while the Warriors are collecting rings like Sonic the Hedgehog.

Landing a top-three pick, on the other hand, is right in the Knicks’ grasp. They are fifth in the lottery rankings, with the schedule gods on their side.

The Knicks have the hardest schedule left for the tanking teams (and all East teams). It's still relatively early, so not a huge disparity.https://t.co/PtdshpaLFl

Porzingis’ return is the only real threat to landing a top pick at this point, and this too is being handled by the team. His recovery remains on track, but he will be re-evaluated in mid-February—a little more than a year since his injury. If we do see KP this season, it will be in microdoses.

In their quest for the ping pong balls, the Knicks can continue to invest in their lottery reclamation projects.

Emmanuel Mudiay, who is 22 years old by the way, is averaging 20.3 points and 5.5 assists in December. He has visibly turned the corner—as has Noah Vonleh. Both have earned a shot to stick around. Mudiay in particular should be given a shot to play with Porzingis. With more time, the Knicks can take the short-term risks.

The timing of his media availability was perfect on Mills’ part. Public opinion of the Knicks, both inside and outside of the league, has not been better. Things are good right now; despite the losing, you can see progress. There is no need to force a miracle like they did in 2010, when Amar’e Stoudemire was signed to save face on whiffing on the LeBron James Decision sweepstakes.

Have Mills and Knicks brass learned from past mistakes, or did they finally figure out the PR game? What moves they make moving forward will answer that question.